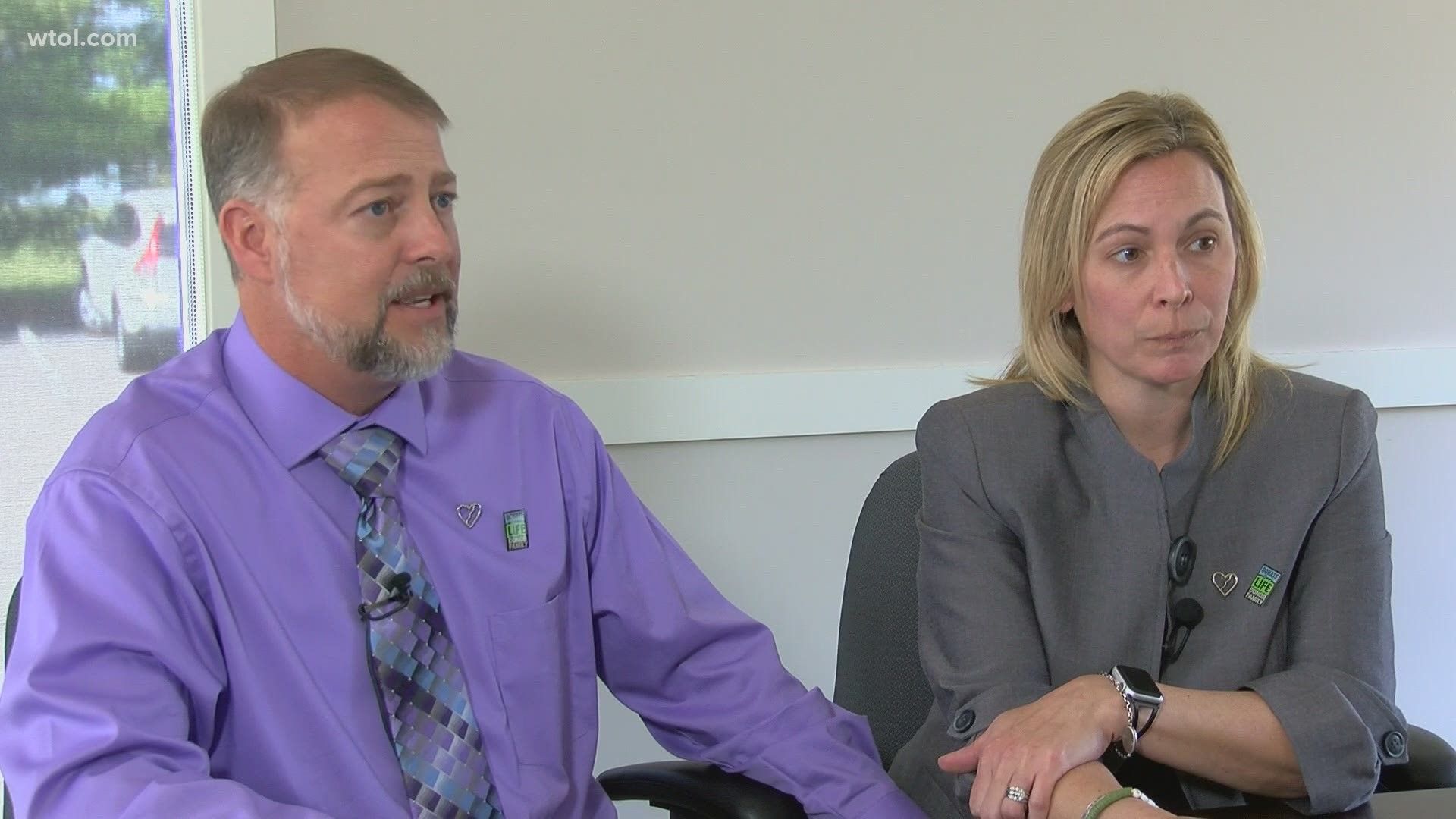 BOWLING GREEN, Ohio — Roughly 200 emails were released by Bowling Green State University Friday night regarding the death of student Stone Foltz, after a public records request was filed by WTOL 11.

Foltz, 20, was a sophomore at Bowling Green State University from the Dublin area who died March 7, days after an alleged hazing incident involving alcohol that occurred at a Pi Kappa Alpha (PIKE) off-campus event on March 4. Foltz spent days in the hospital before his family made the decision to donate his organs.

The fraternity has been placed on interim suspension as law enforcement and Bowling Green State University officials investigate the situation and on Friday, the university levied six citations against the fraternity for student code of conduct violations.

Here is a look into what those emails contained.

University President Rodney Rogers detailed some of the steps the university was taking at the time:

BGSU's president responded showing support of new anti-hazing legislation through a couple of emails as well.

A letter from the president of the Inter-University Council, Bruce Johnson, discussed anti-hazing policies being evaluated by the IUC. It read:

"Dear President, Attached is the letter supporting legislation that we expect will be introduced later this week. As indicated this morning I need you to indicate your authority to attach your signature to this letter with a response like 'I support the letter.' I have also attached the most recent draft of the legislation. Thank you for your support of this initiative.”

BGSU Foundation Board Chair and founder of the Kuhlin Center, Mike Kuhlin, said he was against suspending all Greek Life.

In one email Kuhlin said:

"My suggestion is for the Greek system to go on the offense a bit, to highlight the value of fraternities and sororities, by having representatives appear on a local TV station program - like the Jerry Anderson Show. Perhaps it could be the heads of the four Greek councils. But I'm more inclined to recommend that students from one exemplary fraternity and sorority be featured along with their chapter advisors. This shows there is some adult supervision involved with the chapters."

Emails stated that BGSU One Day, an event aimed at raising funds for students and student programs, would not be offering the Greek Challenge competition - which it had done in the past. They went on to say that all Pi Kappa Alpha-specific funds had been removed from the giving page and no gifts would be accepted to support those funds for the time being. However, it said that individuals could still give to other Greek organizations on campus.

A copy of the fraternity and sorority Greek life membership agreement form, to be signed by any new member, is included in the emails. "To join any social fraternity or sorority life organization at Bowling Green State University, you are only required to agree to the Policy on Hazing," the document reads.

Hazing is defined on the document as encompassing, "any action or activity which has the purpose or effect of inflicting physical or mental harm, embarrassment, or anxiety or which is a violation of law. Hazing can also include any action or situation that intentionally or unintentionally endangers a student in connection with an initiation into, an affiliation with, or the maintenance of membership in any organization, club or team activity that is affiliated with the University."

A signature by a student affirms that they will not allow anyone to violate or abuse their rights as an individual, or violate state or university hazing laws. The student also agrees to contact BGSU police, a staff member within the Office of the Dean of Students or 911 if a hazing violation occurs.

Chapter leadership has another set of forms to sign for the intent to recruit, however, these scanned documents we received are illegible.

FACULTY DISCUSSION OF THE INCIDENT AND GREEK LIFE OVERALL

Following are excerpts from the emails sent in the group on March 7, the day Foltz died, and March 8 with the subject "The hazing incident:"

Obey says he was a full time, live-in Greek fraternity house director for four years while a grad student at BGSU and described how difficult it was for young men to understand the concept of "manhood" and what makes you a man. A March 7 email describes the Stone Foltz tragedy as an example:

"For when someone places a bottle of alcohol in front of a young and and tells that young man he must drink all 60 oz of it in one sitting (40 consecutive 1.5 oz shots) in order to prove his worthiness of becoming a member of that fraternity, the rules of manhood speak volumes.

"One: The fraternity members' actions prove that policies and laws don't apply to "real" men. And these young men already see how powerful men can commit all maner [sic] of heinous crimes without consequences.

"Two, nn [sic] front of you is someone who wants to prove himself worthy to join your group the choices for inclusion are many. Do you tell them to feed the hungry or provide shelter to the homeless? Drive the elderly to Covid vaccination sites? No, none of the above. Instead you tell hi to drink a whole bottle of liquor, the consequences being that if you don't, you are not worthy. That is what happened.

"Three - the other side is the victim who, to be honest, placed his trust in strangers who promised brotherhood. But to join this brotherhood, you must be willing to go along with the law and rule breaking of these men and avoid showing weakness at all costs. ... You do have a choice but the choices are terrible. Walk away and be an outcast or drink and roll the dice on whatever the consequences are.

"In hindsight we can say he should have walked away. But he is a victim. Someone put that bottle in front of him with the promise of brotherhood and it appears to have been an irresistible offer. ... My heart breaks for this young man and his family. My heart also breaks knowing that the problems we faced in Greek Life 17 years ago still exist today because we have not advanced the idea that the concept of manhood has evolved."

Scott Piroth, teaching professor with the department of political science, stated he believes "it is the time to discuss the merits of the Greek system and sought to end the system entirely, noting "Whatever philanthropic good fraternities and sororities achieve is outweighed a thousand times by their well-deserved reputations for hazing and date rape.

"If anything remotely good can come of this terrible tragedy, it would be the end of this absurdity at BGSU."

"Of course, alcohol abuse and date rape are ever-present on college campus and will not go away if we get rid of fraternities, but the insular 'protect one's own' culture of fraternities is the core of the problem. They are inherently exclusionary institutions that completely contradict the ideas for inclusive university communities. Good riddance!"

Terence J. Pitre, Department Chair of Accounting and IS in the College of Business, pushed back against the idea of ending Greek life, saying "this is not the time to debate the merits or Greek letter organizations." He noted that the issue is not limited to fraternities and men.

"Far more people die or get sick from random house parties and tailgating, corporate functions, etc. The issues are bigger than Greek life if you really want to get down to it. ... Let us turn our attention back to the event and provide those who need it the support they need."

On March 8, Philip Terrie said the main reason nationally that university administrators don't ban fraternities "or otherwise take the sort of serious steps necessary to put a leash on them is that they are afraid of offending alumni donors."

RELATED: 'We don't need the condolences, we just need this to stop' | Parents of Stone Foltz speak out after BGSU sophomore's death, reveal BAC of 0.394

Included within the documents is a Bowling Green State University "The Healthy Minds Study" data report, listed in an email from 2019-2020. The study’s purpose was to give a detailed picture of mental health and related issues in college student populations.

Students were invited and reminded to participate in the survey via email. They participated during the first two weeks of the term, the last week of the term, and during any major holidays.

The top items listed from the report's findings were: