The attorney for the family of Stone Foltz, a Pi Kappa Alpha (Pike) said in a statement on Sunday evening that the BGSU sophomore has died. 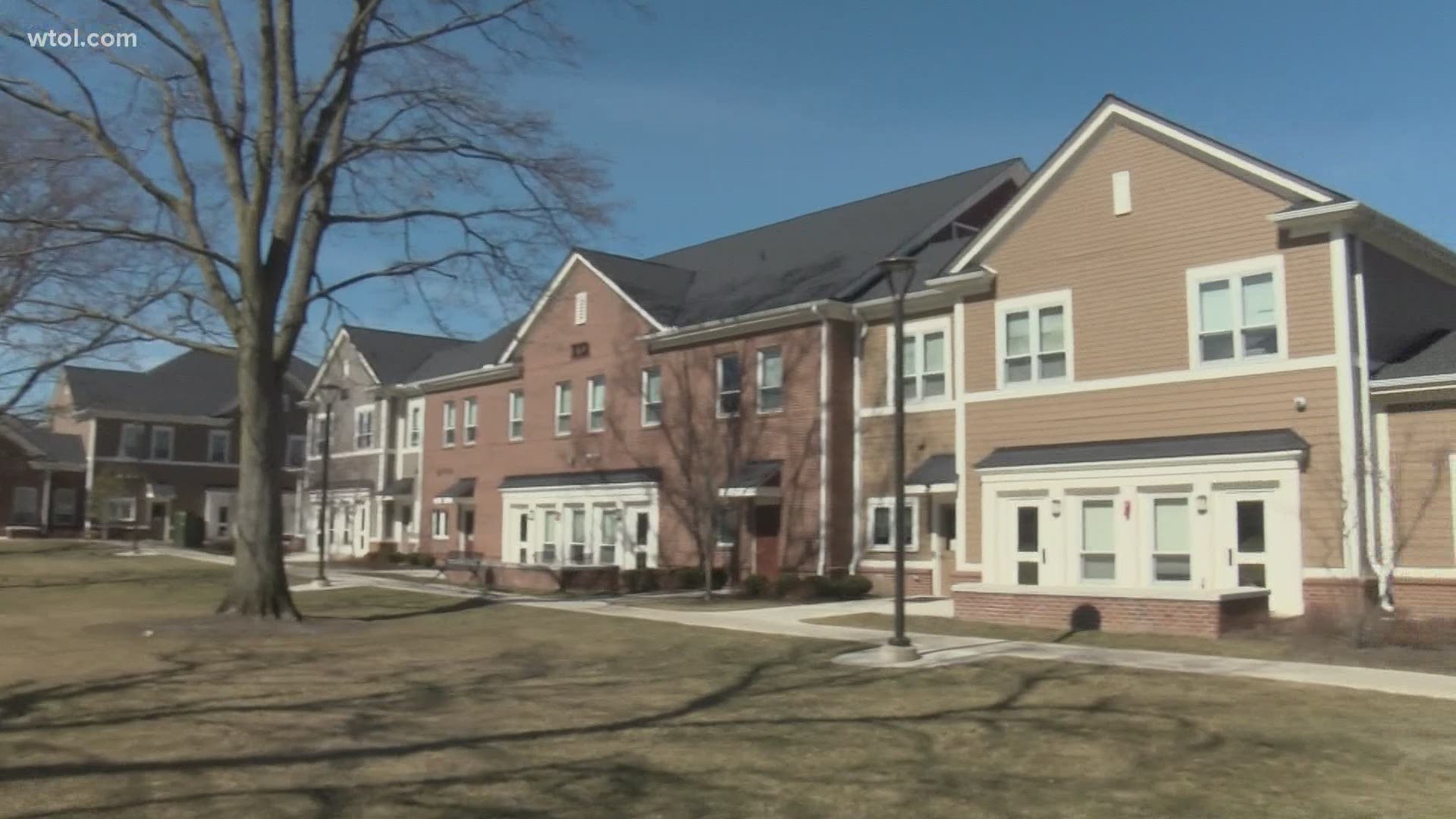 BOWLING GREEN, Ohio — An attorney who is speaking on behalf of the family of BGSU sophomore Stone Foltz says that Stone Foltz has passed away:

"The death of Stone Foltz is a tragedy. He was a beloved son, brother, and grandson. At this time we are gathering all of the facts leading to his untimely death and we have no interest in commenting on speculation. However, we do ask that you please show respect and consideration for Stone’s family. Despite their unbearable grief, they agreed to donate Stone’s organs so that others may have a second chance at life."

The student was being kept alive while they worked with doctors to donate his organs in the wake of an alleged alcohol-fueled fraternity hazing incident on Thursday that left him in critical condition.

The national fraternity on Saturday described Thursday's activities as an "alleged incident of alcohol-related hazing at an off-campus event."

The attorney released a statement from the Foltz family Monday, adding to the earlier words on Foltz's death:

"The death of Stone Foltz is a tragedy. We are actively investigating the facts of the case and will be interviewing witnesses and gathering information to figure out exactly what happened on March 4. Investigations involving hazing are complex and take time, but the Foltz family will eventually know the truth.

No family is ever prepared to say goodbye, especially under these circumstances. The Foltz family has been heartened by the outpouring of support, and we ask everyone to keep showing respect and consideration in their time of grief. Despite their unbearable sadness, the Foltz family agreed to donate Stone’s organs so that others may have a second chance at life."

A GoFundMe has been established for the Stone Foltz memorial fund and verified by family.

MESSAGE TO BGSU STUDENTS, FACULTY, AND STAFF FROM UNIVERSITY PRESIDENT

Following the death of Foltz, Bowling Green State University President Rodney Rodgers sent an email to the students, faculty, and staff of the university.

A summary of the email was later shared by the university's spokesperson:

Stone was 20 years old and a sophomore in the Allen W. and Carol M. Schmidthorst College of Business. Those who knew Stone remember him as a kind, selfless person with a great sense of humor. The University mourns his tragic loss and shares in his family and friends’ sorrow. BGSU is collecting sympathies for his family.

Students can connect directly with counselors with the BGSU Counseling Center, who are available both remotely and in person. Faculty and staff can access support through the University’s Employee Assistance Program.

As President Rogers mentioned, BGSU can find comfort and inspiration in Stone's memory and called on the University community to keep his parents, family and friends in their thoughts during this very difficult time.”

A BGSU student who says his roommate is pledging Pi Kappa Alpha gave his account to WTOL 11 on Friday. He asked for his identity to be hidden because he knows people involved in the alleged misconduct. He also told us that the conversations he had with his pledge roommate made him fear for his roommate's life.

"We have to drink a handle of any alcohol that our big gives us. We have to finish the whole thing in the time we're there before we leave."

That's the last thing this student said he heard from his roommate until he came back later that night from a party that's now the center of an investigation at BGSU.

"I've never seen my roommate more drunk in his entire life. He immediately went to the bathroom and was throwing up in the toilet for just 15 minutes to an hour and making himself vomit," he said.

The student who spoke with WTOL 11 is not part of Greek life at the university. He says he talked to us because he's afraid students will continue to get sick or die if no changes are made.

"It's crazy to me that they can allow this deathly and neglectful drinking to go on. I think it's incredible to me that they try to hide themselves behind this organization," the student said.

Foltz' condition after the fraternity event

Alto described information on what happened after the incident, saying after the Pike fraternity event Thursday, Foltz was dropped off around 11-11:30 p.m. at his apartment.

"Shortly thereafter, Stone's roommates or friends found him, who then called 911," said Alto. "He was in need of immediate transport to the hospital. And he was (flown) to the hospital where he's at now."

"The International Fraternity is horrified and outraged by this incident. The Fraternity has a zero-tolerance policy toward illegal activity, substance abuse, bullying, and hazing of any kind. Let us reiterate in the strongest terms: We refuse to defend or condone any behavior that creates dangerous environments or situations for our members or the larger campus community at any of our 200+ chapters in the United States and abroad," the Pi Kappa Alpha statement said.

The statement goes on to say the national is cooperating in investigations with the university.

"We have immediately placed this chapter on administrative suspension and advised its leaders to cooperate fully with University administration and local law enforcement. As more details are confirmed, we will also pursue permanent suspension of Delta Beta Chapter as well as expulsion of all chapter members from the International Fraternity.

"Any member of Pi Kappa Alpha should immediately and confidentially report any hazing or potential hazing or other harmful activity to their chapter consultant, director of service, or the International Fraternity here."

Credit: WTOL 11
On Sunday, March 7, the Pi Kappa Alpha letters were removed from their on-campus residence. BGSU said in a statement that this was due to the interim suspension, "given that Pi Kappa Alpha is not currently recognized as a registered student organization."

The letters on the Pi Kappa Alpha on-campus fraternity house were removed Sunday morning. BGSU Deputy Chief of Staff and Spokesperson Alexis Solis released a statement on behalf of the university shortly after:

“Bowling Green State University has placed Pi Kappa Alpha Fraternity on interim suspension for alleged hazing activity. Local law enforcement and University investigations continue. Given that Pi Kappa Alpha is not currently recognized as a registered student organization, the fraternity’s Greek letters were removed from its on-campus residence this morning.”

Credit: Brody Sell/WTOL 11
On Sunday, March 7, the Pi Kappa Alpha letters were removed from its on-campus residence. BGSU said in a statement that this was due to the interim suspension, "given that Pi Kappa Alpha is not currently recognized as a registered student organization."

A statement from BGSU on Saturday reiterated that Pi Kappa Alpha fraternity is now on interim suspension for the alleged hazing activity. It is being investigated by local law enforcement.

The university said it began to meet on Saturday morning with student leaders to discuss the long and short-term future of fraternity and sorority life at BGSU.

"Above all, we remain committed to supporting the hospitalized student's family and friends. They are living every loved one's worst nightmare, and we owe them the utmost respect and privacy at this time," the BGSU statement said.

On Saturday night, BGSU President Rodney Rogers, released a communication aimed at the campus community which said the university will be conducting its own “code of conduct” investigation, in addition to working with law enforcement.

Starting at midnight on Saturday, the university is “interimly suspending all new member intake processes and on- and off-campus social events.”

Attorney Alto, who has experience dealing with hazing lawsuits brought by families, weighed in on possible legislation that would increase the penalties for people convicted of hazing.

"It happens year after year after year. It's been going on for a long time, and these young men in these fraternities who are given the reins to power, they just don't seem to get what they're doing is wrong," Alto said. "It causes serious, catastrophic, life-altering harm and death. And they just don't seem to get it. And, you know, one of the things that I'm hopeful for is that this year, the Ohio legislators (could) pass Collin's Law, which was introduced last year but didn't make it ... I'm hopeful that, and I believe by the end of this month, it will be reintroduced. And I'm hopeful that the legislature will take it up and pass the law, which would make it one of the most comprehensive anti-hazing statutes in the country."

"Collin's Law," also known as House Bill 310, was proposed to focus on stricter penalties for anyone who engages in hazing. The anti-hazing bill was named for Collin Wiant, an Ohio University freshman, who died after medics found him unresponsive at the Sigma Pi Fraternity where he was pledging.

Wiant's cause of death was asphyxiation due to nitrous oxide ingestion.

In the family's lawsuit, it claims he was "pelted with eggs, hit with a belt and repeatedly punched" by members of the fraternity. The lawsuit also claims the fraternity provided or forced Wiant to take drugs and drink alcohol.

Under House Bill 310, a person convicted of hazing would no longer face a misdemeanor charge. Instead, they would face a felony charge.

Last year, I co-sponsored and the House passed legislation to enact the Anti-Bullying and Hazing Act. My commitment is that we continue the work from the last General Assembly to get a bill sent to the Governor's desk to address these very serious incidents which impact our talented youth and young adults. My thoughts and prayers are with the family, friends, and BGSU community."

Ghanbari posted a statement on Facebook after learning of the death of Foltz:

Ohio Sen. Theresa Gavarone, R-Bowling Green, posted a comment after the announcement that Foltz had died in which she said she would be addressing the issue of hazing.

We need to fight against hazing and I will have more details about that work soon.

My statement about the hazing incident that resulted in the heartbreaking passing of a BGSU student: pic.twitter.com/4X9PWwWfM9

"Time and time again we have seen many students fall victim to hazing, with some even losing their lives because of it.

There was legislation introduced last year that would have made some much-needed reforms to the hazing laws in Ohio. Unfortunately, that legislation ran out of time, but I am hopeful we can come up with a bipartisan solution to prevent the senseless tragedies that can come from hazing."

Ohio lawmakers have introduced new legislation in the statehouse which directly relates to the alleged hazing incident at Bowling Green State University.

The new bill that's been introduced is the "as-passed" version from the House and will get an official house bill name, but that hasn't been given yet.

Ghanbari says they have sent out a co-sponsor request and state lawmakers will have until Wednesday to sign on and sponsor the bill.

Then it will get introduced on the house floor at the end of the week.