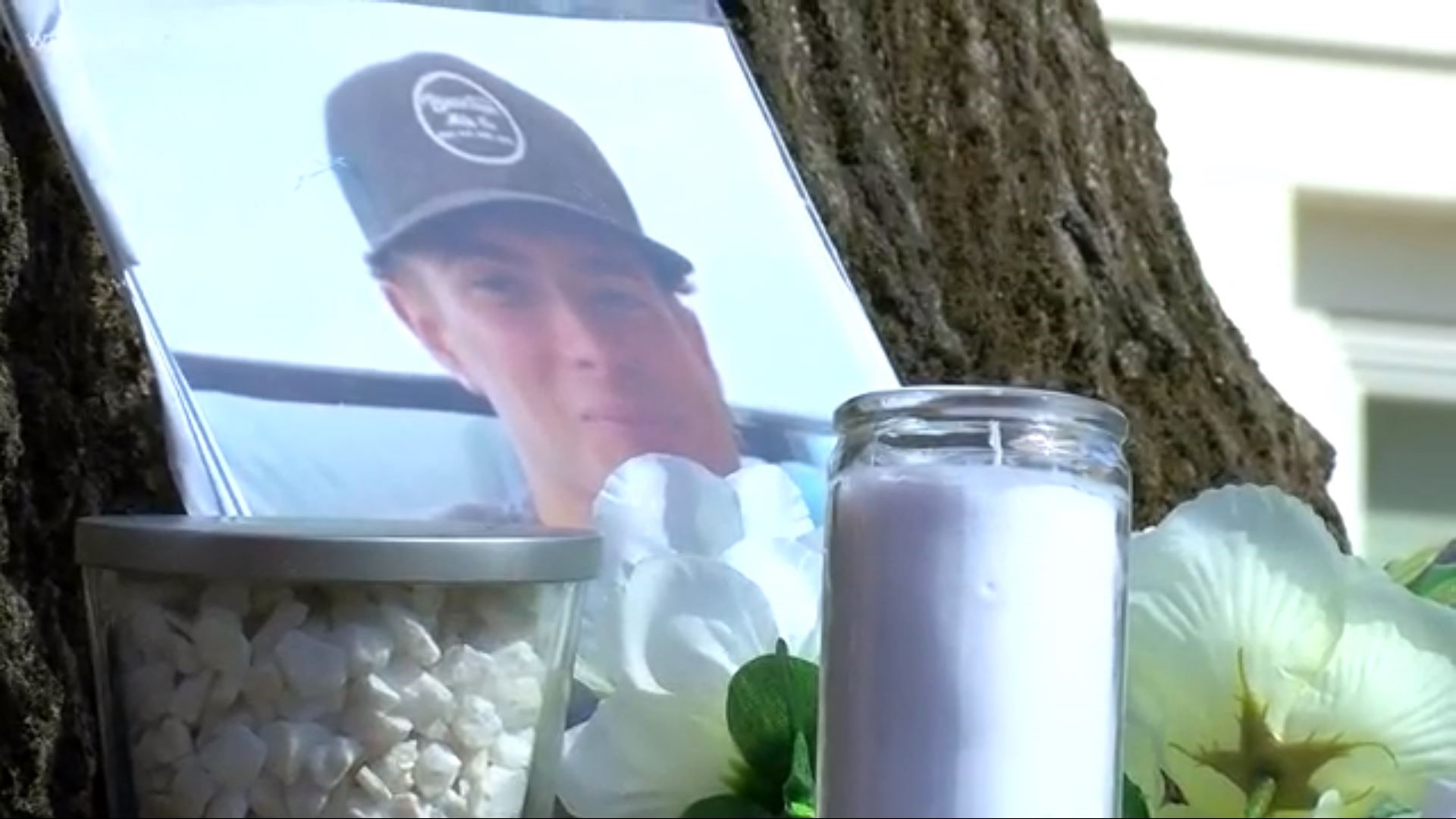 The eight people indicted are:

Some of the defendants face felony involuntary manslaughter charges while most of the defendants were charged with multiple misdemeanor counts of hazing, failure to comply with underage alcohol laws, and obstructing official business.

Foltz's parents, Shari and Cory Foltz, stood hand-in-hand as the prosecutor outlined charges against the eight young men. Family attorney Rex Elliott called it a hard day but a necessary one for the family.

"I think they have complete confidence that justice is going to be done here on the criminal side," he said, "and they believe that this is critically important to stopping this kind of senseless conduct."

Dobson said it's unclear how many people attended the event and additional people could be charged. He said all but one person charged is a BGSU student.

Lehane was not enrolled at the time of the incident.

Dobson said the investigation determined Krinn was Foltz's big brother in the fraternity was "more directly involved" in Foltz's death. He would not say if the two knew each other previously.

Some of the alcohol-related offenses involve providing alcohol to underage persons, while others reference permitting that activity at their residence.

The multiple counts of hazing and failure to comply with underage alcohol laws reflect the allegation that those defendants participated in providing copious amounts of alcohol to Foltz and the other new members, the Wood County Prosecutor's Office said.

First-degree manslaughter alleges that the defendant caused a death by committing or attempting to commit a felony and carries a maximum penalty of 11 years in prison.

Third-degree felony manslaughter alleges that the defendant caused a death by committing or attempting to commit a misdemeanor and carries a maximum penalty of three years in prison, as do reckless homicide, tampering with evidence, and obstructing justice.

Felonious assault alleges that the defendant caused serious physical harm to another. It is a second-degree felony that carries a maximum penalty of eight years in prison.

The defendants have summonses to appear in court on May 19 at 1 p.m.

Arrests may be made if the defendants fail to appear.

The Foltz family attorney stressed that what happened to Foltz is not worthy of just a misdemeanor. He hopes the case helps lead to the passing of Collin's Law, named after Collin Wiant, a freshman at Ohio University, who died after collapsing on the floor of an off-campus fraternity house in 2018. The proposed law would make hazing a felony in Ohio.

"Maybe if we have severe enough consequences for this kind of stuff, it'll stop," Elliott said. "When you have a slap on the wrist, no consequence it just continues."

As hazing is now under a microscope across the nation, the Foltz family wants accountability. While nothing will ever bring Stone back, his parents say they want his legacy to be that this never happens to anyone ever again.

"They do not want Stone to be left behind," Elliott added, "and if we can dramatically reform this system right now and save lives, it'll accomplish what they're looking for." 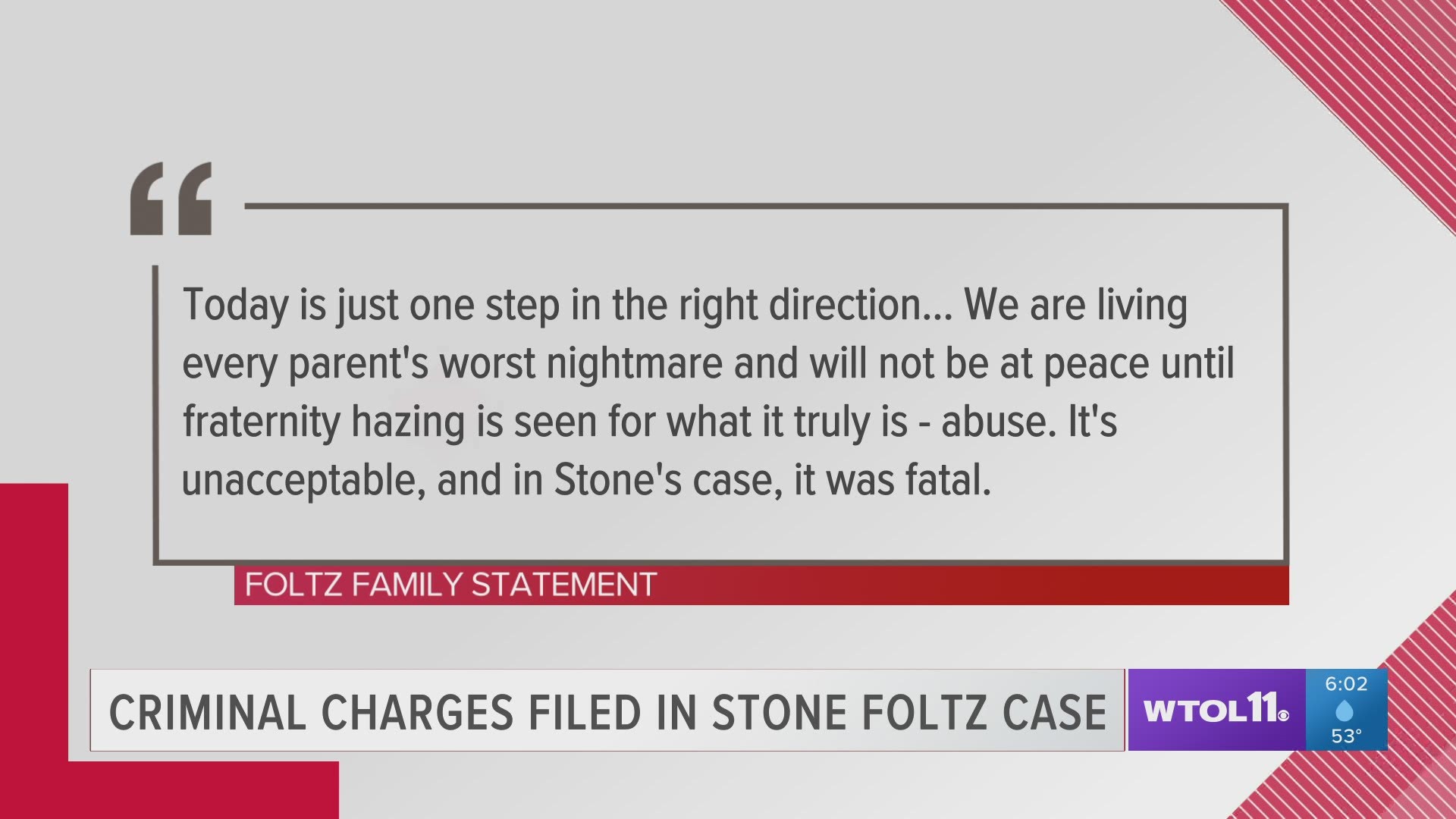 “Wood County Prosecutor Paul Dobson today announced felony and misdemeanor charges, related to a Pi Kappa Alpha hazing incident, against 8 individuals. Bowling Green State University is appreciative of the hard work and diligence done by the prosecutor and a grand jury to seek justice and hold those accountable in the tragic death of student Stone Foltz. At this time, the University refers all questions regarding the law enforcement investigation and criminal cases to the Wood County Prosecutor and Bowling Green Police.”

The Foltz family issued a statement Thursday through their legal team:

"We are grateful for all of the hard work conducted by local law enforcement and the Prosecutor's office, and we are confident they will make sure justice is served. However, today is just one step in the right direction. Swift action also needs to be taken by government officials and university presidents nationwide to abolish fraternity hazing.

"We are living every parent's worst nightmare and will not be at peace until fraternity hazing is seen for what it truly is — abuse. It's unacceptable, and in Stone's case, it was fatal. How many injuries and deaths will it take for people in positions of power to do the right thing? We demand zero tolerance. Anything less will result in additional innocent lives lost and parents like us pleading for change."

BGSU sophomore Stone Foltz, 20, died after an alcohol-fueled hazing incident off campus that is being investigated at Bowling Green State University.

The incident occurred at a Pi Kappa Alpha (PIKE) off-campus event on March 4. Foltz was hospitalized for several days before his family made the decision March 7 to take him off life support and donate his organs to give others a chance at life.

The move came about a month after Foltz's death. Pi Kappa Alpha will never again be recognized at the university.

"This expulsion is because of hazing, which is absolutely intolerable," a BGSU spokesman said in a statement. "The University's investigation found the fraternity to be reckless with a disregard for the health and safety of our community. This investigation also revealed a deep culture of deception rooted in the organization, filled with dishonesty and disrespect for our community."

The full findings of Foltz's autopsy by Lucas County Coroner Diane Scala-Barnett were released on April 7, and in the coroner's verdict she notes, "It is my opinion that Stone Foltz died of FATAL ETHANOL INTOXICATION DURING HAZING INCIDENT. Manner of death: Accident - College fraternity induction ritual."

Foltz's blood alcohol content was 0.394, according to the family, who said it was likely even higher immediately after the hazing ritual.