Jeffery Hodge pleaded guilty to the murder of 19-year-old Melissa Herstrum in 1993. 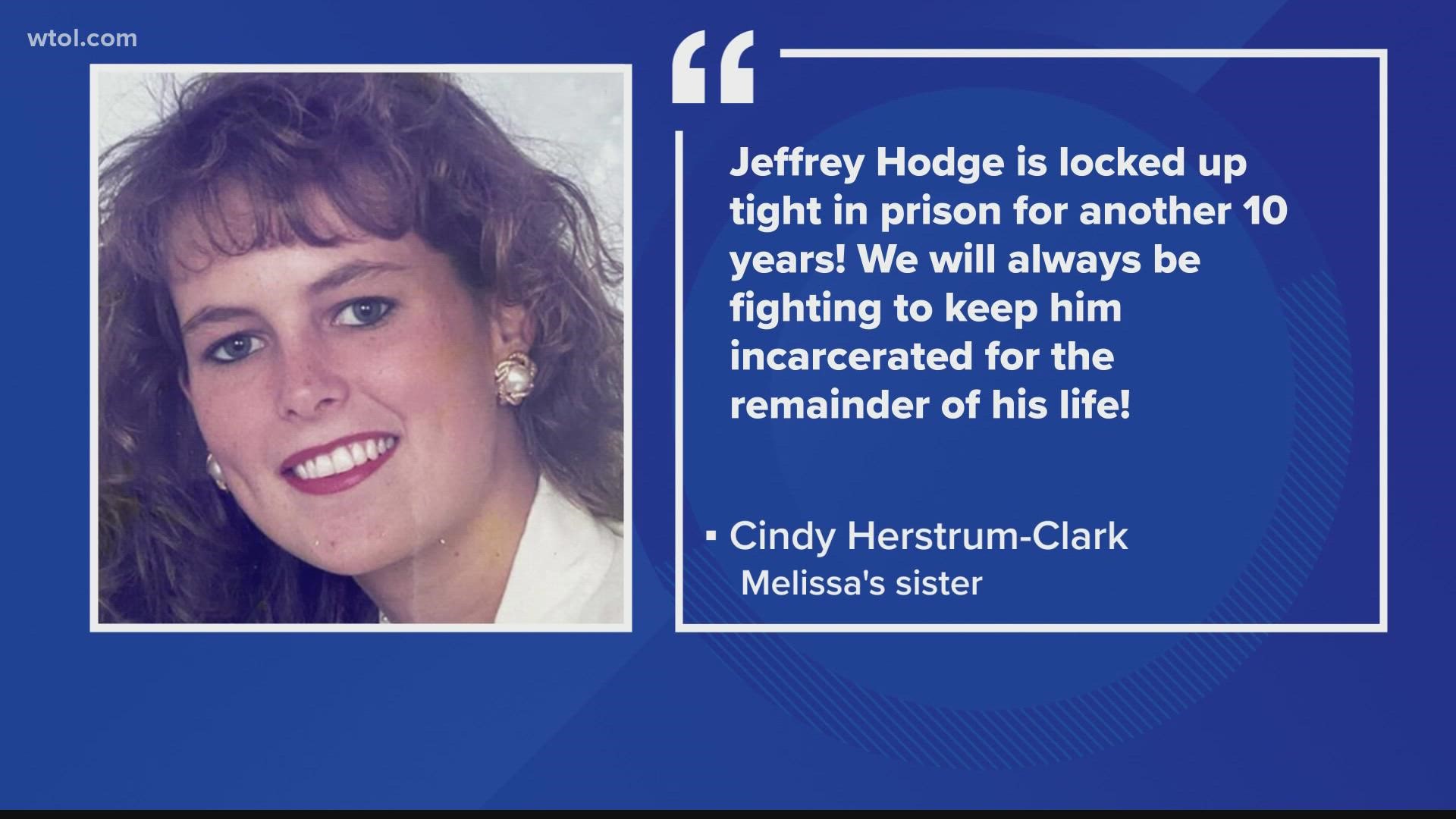 COLUMBUS, Ohio — Former University of Toledo police officer Jeffrey Hodge pleaded guilty in 1993 of kidnapping and murdering 19-year-old Melissa Herstrum. On Wednesday, the state parole board denied his attempt to be released from prison for that crime.

Hodge took Herstrum to the Scott Park campus on a frigid January night in 1992. He laid her in the snow and shot her 14 times in the head, neck and back.

Stating, "his release into society would create an undue risk to public safety and would neither further the interests of justice nor be consistent with the welfare and security of society," the board decided that the gravity of the 52-year-old man's crime outweighed his attempts at rehabilitation.

Anna Kolin joins Melissa Herstrum's family and so many others impacted by Hodge in breathing a sigh of relief.

"When you sent that text to me today telling me that he was denied parole," Kolin said, "there was a dramatic sense of relief that I felt."

The Ohio Parole Board ruled that he will remain behind bars for another 10 years, citing the brutal and deliberate nature of the crime along with the betrayal of the public trust as a police officer.

“His acts were purposeful and planned...,” the board said. “Hodge does not have insight into what triggers existed to cause him to make the decisions he made. Therefore, substantial reason exists to believe that the unique factors of the offenses of conviction, marked by brutality, complete disregard for life, betrayal of public trust, and a lack of insight thereto, significantly outweigh offender Hodge's rehabilitative efforts.”

She says Hodge pulled her over 24 hours before Melissa's murder. She believes it could've been her that night if her boyfriend hadn't pulled up a short time later. And she was afraid for her safety after speaking out, and for Melissa's family, if he would've been released.

"It's not just Melissa and her family who clearly was the most impacted by this," Kolin added, "but the community as a whole, there was a lot of trust that was damaged in our community as a result of that."

The parole board agreed, noting Hodge neither took responsibility nor showed remorse for his crimes. It's something attorney Peter Weinberger - who represented the Herstrum family in the 90s - said had to be factored into the decision.

"He shows no remorse is an indication that he's unpredictable," Weinberger said. "And if released the risk of significant danger to the society is going to be there."

Herstrum's family and friends continue to want her killer to stay locked up.

“There was nothing that I could’ve or my parents could’ve done to protect her from someone like you,” said Cindy Herstrum-Clark, Melissa's sister, to Hodge during his sentencing in 1993.

WTOL 11's sister station in Cleveland, 3News, sat down with members of the Herstrum family and her friends in Rocky River, explaining the pain they felt then remains sharp and undulled by time.

Hodge was given a sentence of 30 years to life, but it's only been 29. And, each year, an excruciating reminder of how she was taken, family and friends said.

"He shot her 14 times at close range and her clothes were partially removed. He wanted to see the impact of the bullets, and I have to relive all these things, but they never leave my memory anyway. He's dangerous," sister Cindy Herstrum-Clark said, fighting back tears.

But it wasn't just how he killed her. It was what he did after that makes Melissa's family shudder to this day.

"He wanted to be at the autopsy and witnessed the autopsy. He also was standing guard outside the sorority house. He found the body himself, him and his partner. So he staged that whole scene," friend T.J. McManamon said.

On Wednesday, Cindy Herstrum-Clark sent a statement thanking the community for speaking up about the case and sending letters of support to block Hodge's parole effort:

"Our family thanks the community, the news reporting and those that did not even know our family or Melissa but sent support to block Hodge’s parole. Yesterday the Parole Board unanimously voted to defer consideration for parole until 2031. Jeffrey Hodge is locked up tight in prison for another 10 years! We will always be fighting to keep him incarcerated for the remainder of his life!

"My sister will always be remembered for her love for life, kindness to others and her fun sense of humor. I miss her always and not a day goes by that I don’t feel this emptiness that she is not with us for the joys and sorrows of life. My parents have suffered much more than any parent should losing their beautiful daughter to senseless brutal murder.

"It’s just not fair that there was not life without possibility for parole in the State of Ohio, but the system did work and Parole Board members felt his release into society would create undue risk to public safety and noted that Hodge’s complete disregard to life and his lack of insight significantly outweigh his programming rehabilitative efforts."

But how could a killer even be potentially set free? In a statement, Ohio Department of Corrections spokesperson JoEllen Smith said, in part:

“He is eligible for his first hearing because he served his 30 years, minus 430 days of jail time credit.

“He earned good time of 30 percent, therefore he is eligible for parole consideration after serving 70 percent of his minimum sentence.”

RELATED: Nearly 30 years after her murder, Melissa Herstrum's family fights to keep her killer behind bars