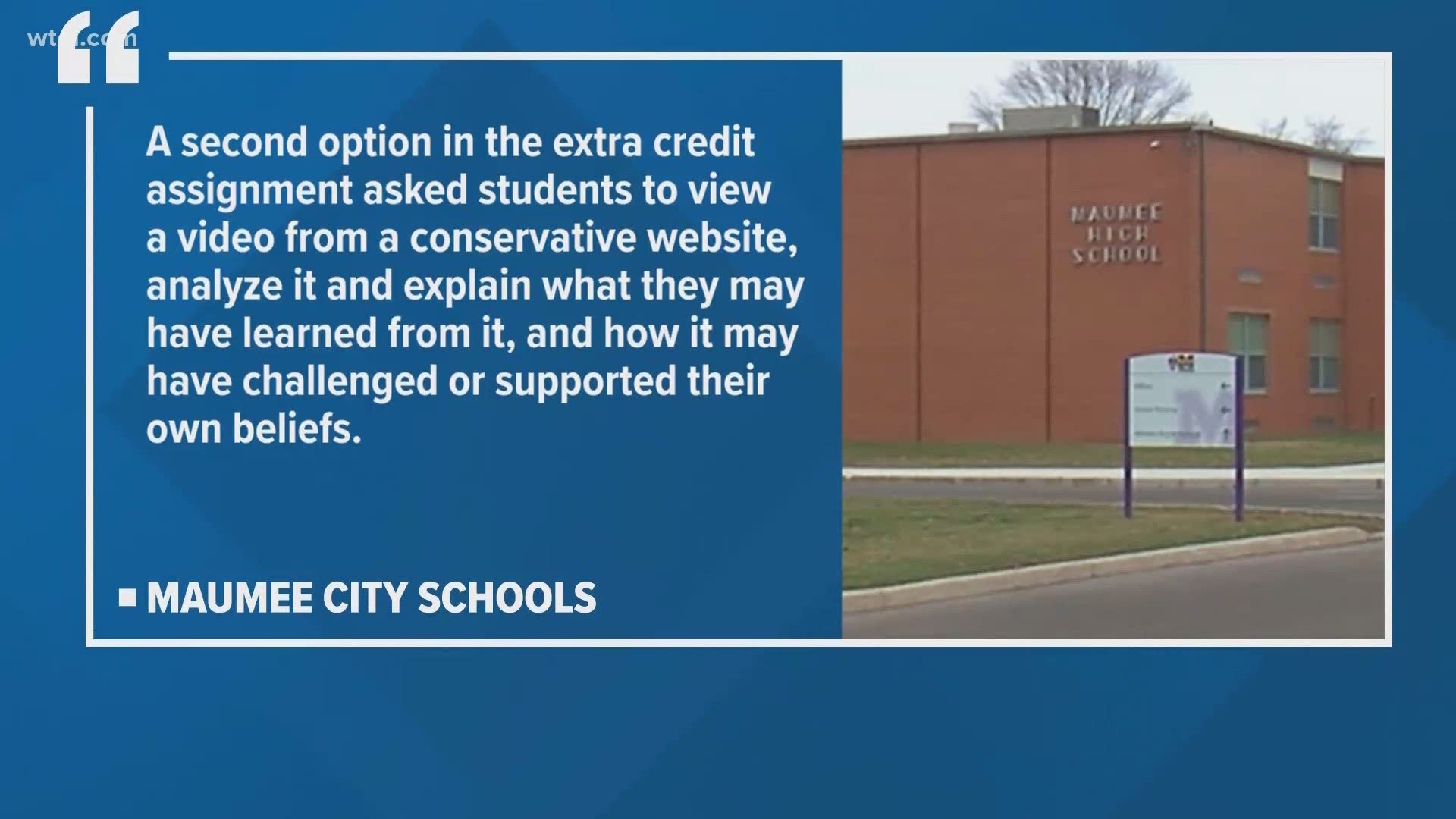 MAUMEE, Ohio — An extra credit assignment option has raised concern for one Maumee High School student and her mom.

HuffPost reports that a 10th-grade history teacher made available PragerU videos, along with a series of questions as extra credit options.

Prager University is, according to a video in the "About Us" section of their website, "a conservative media company that happens to be a non-profit."

On YouTube, PragerU has 2.8 million subscribers. Some of their top videos are titled "Why I Left the Left," "Make Men Masculine Again" and "Dangerous People Are Teaching Your Kids."

Maumee High School officials have since removed the PragerU extra credit from the syllabus, according to HuffPost.

The district released the following statement on Tuesday afternoon:

"Maumee City Schools is aware of the online story published by Huffington Post on October 19. We would like to clarify the sequence of events and correct impressions resulting from that article.

"Students were offered an extra credit assignment intended to challenge their critical thinking skills by examining political cartoons. Students had options and were able to choose from sites presenting either liberal, moderate or conservative viewpoints through political cartoons. The assignment challenged students to analyze a cartoon’s content, context, symbols, labels, tone and more.

"A second option in the extra credit assignment asked students to view a video from a conservative website, analyze it and explain what they may have learned from it, and how it may have challenged or supported their own beliefs.

"A parent who objected to the assignment contacted school administrators. In alignment with our District goals, we made immediate changes to support the student. An alternative assignment was offered, and the student was given the opportunity to transfer to a different class. Our first goal was to ensure the student would be comfortable fully participating in the curriculum. Additionally, the extra credit assignment was removed from the class syllabus. All of this occurred before the Huffington Post contacted the District.

"We believe that students deserve a balanced presentation of materials and we support our educators in using a variety of instructional tools and materials in their teaching, expecting them to always exercise good judgement. We take pride in preparing students for a successful future including the ability to listen to as well as express and support their own viewpoints," the statement said.

ABOUT THE EXTRA CREDIT

The extra credit, according to the teacher's website, was to watch a PragerU video and provide responses to prompts such as "Something new and interesting I learned...." and "What is the most important message from the video that others should know?"

The assignment also asks the student to provide ideas from the video that challenged their "current knowledge or beliefs."

According to the syllabus for the class, the extra credit could be repeated every two weeks, for a total of eight times per semester.

The HuffPost report did not specify if any particular videos were recommended or required by the teacher.

NEW: An Ohio school has been assigning kids PragerU videos for class. The site has videos like 'the left ruins everything' & 'playing the black card'

Turns out, PragerU is amid a new push to get into K12 schools. They say 'so many' teachers have signed uphttps://t.co/WwxgwIGmIb

On Facebook, PragerU states their mission is "to promote what is true, what is excellent, and what is noble through digital media."

Under the header "What We Do," PragerU says that they make "exceptional video content that advances Judeo-Christian values."

Maumee students were also given the option to review a political cartoon instead of a PragerU video, with one recommended source for political cartoons listed as the conservative news site, Townhall.

PragerU was listed as an extra credit option during the winter 2019-20 semester as well.

The nonprofit conservative media company on Tuesday also highlighted criticism to its videos and used it to call for more donations to its organization to "Help us reach even more young people!"

The left is scared about the impact PragerU is making on the next generation!

HuffPost says the PREP curriculum was created in response to COVID-19-related school shutdowns, which “forced us to take a closer look at what is being taught and not taught across the country,” said Adrienne Johnson, PragerU’s chief of staff and lead of the PREP platform, in a video interview with conservative news channel One America News Network. “America is not being fairly portrayed. Many schools are implementing anti-racist Black Lives Matter curriculum and The 1619 Project.”

One video on PragerU's YouTube page is called "The Left Ruins Everything", with a description reading: "From the Boy Scouts to literature, from the arts to universities: the left ruins everything it touches. Dennis Prager explains." It has been viewed over 3 million times.

Dennis Prager, founder of PragerU, is a conservative radio host and writer.

PragerU's website teases an upcoming video series titled "Stories of Us," which is described as featuring "Americans who have denounced leftism and are helping others to find a better life."

According to PragerU, "Stories of Us" are "important stories of ideological transformation expose the left's lies and manipulative agenda for millions to see."

A running counter near the bottom of the website claims over 4,205,820,000 video views as of the time of this writing. Below that is a disclaimer reading that Prager University is not an accredited academic institution.