Police looking for person suspected of trying to set church on fire, spray-painting 'Jesus is Black'

Toledo police say someone intentionally tried to set Rosary Cathedral on fire and spray-painted the message, 'Jesus is Black' on the walls. 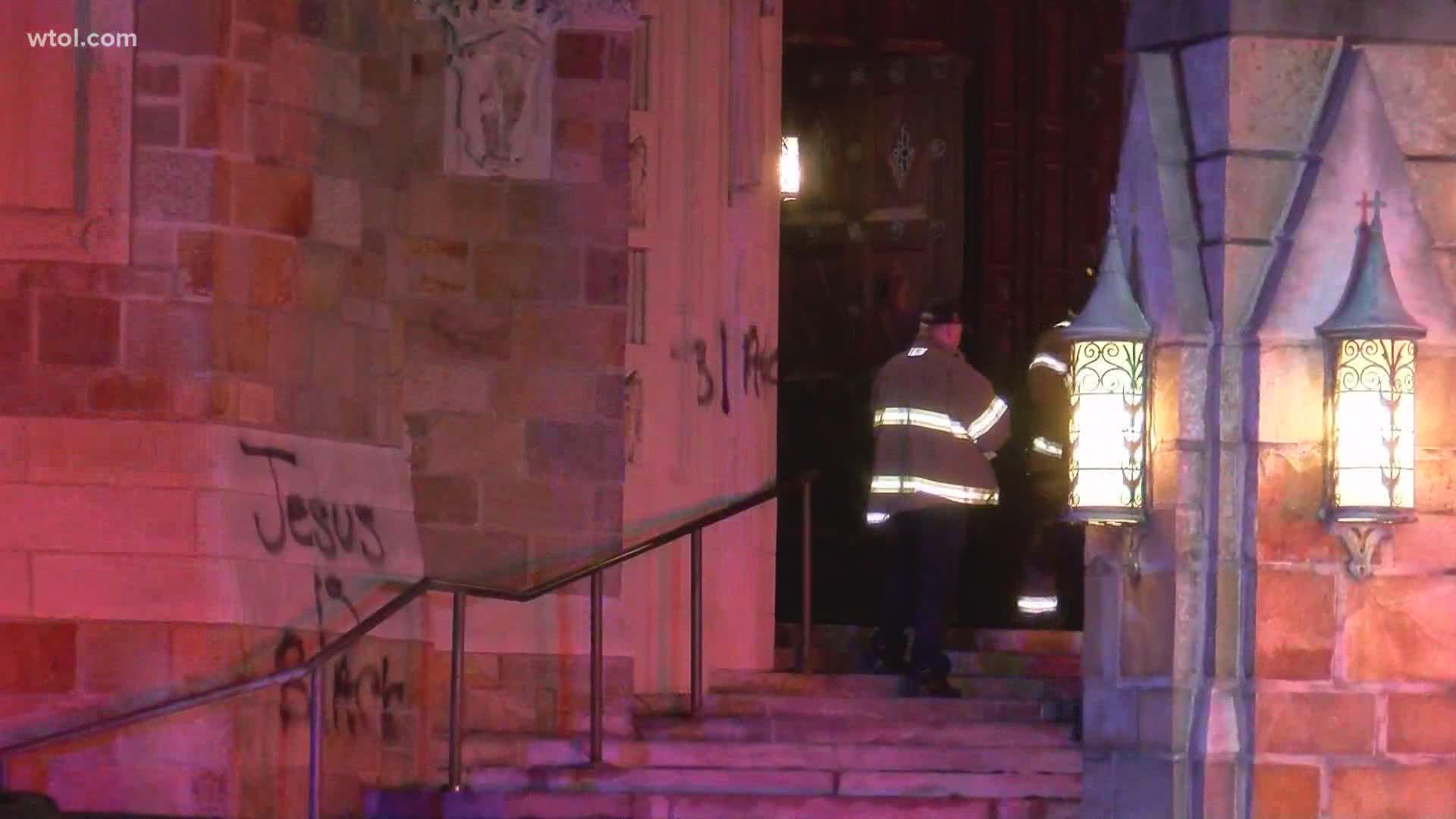 TOLEDO, Ohio — Toledo police are looking for a person suspected of intentionally trying to set Rosary Cathedral on fire and spray painting the message, "Jesus is Black," on the walls.

Fire authorities said first crews on the scene reported they didn't see a fire and there were no evident signs of flames at first but upon investigation, firefighters found that the entry doors to the church had been damaged by a flash fire that had extinguished itself.

WTOL 11 spoke with a neighbor who lives across the street from the church who said he saw a man by himself at the church. He added the man didn't seem to be in a hurry.

The neighbor said he called the police when he saw the fire.

Fire crews entered the church to check for additional fire damage but didn't find any. The damage was contained to the large wooden entry doors and trim, according to the Toledo Fire and Rescue Department.

The investigation is still in its early stages but authorities have determined the fire to be an arson.

No one was reported injured in this incident.

The damage to the church totals $5,100, according to the fire department.

TPD looking for person suspected of trying to set church on fire, spray-painting 'Jesus is Black'

1 / 4
WTOL 11
Police are looking for a person suspected of trying to set Rosary Cathedral on fire and vandalize it, writing "Jesus is Black" on the walls.

The Diocese of Toledo released a statement about the fire at Rosary Cathedral Monday morning, saying the diocese's leaders are "alarmed and heartsick" by what happened:

In the early hours of Monday morning, a neighbor alerted the police and fire departments of vandalism which took the form of graffiti on the walls and doors and igniting the church doors on fire at the main entrance on Collingwood Boulevard of Our Lady, Queen of the Most Holy Rosary Cathedral.  We are alarmed and heartsick by what occurred at the mother church of the Diocese of Toledo, a sacred building, a house of worship, and a historical, architectural, and spiritual treasure.

We are very grateful for the vigilance of our neighbors and the rapid response of our first responders, and that no one was injured. As the damage to the Cathedral is assessed, there is an ongoing investigation to determine whether the acts were religious, racial, or ethnic in nature and we will continue to cooperate with authorities.

If you have any information, please contact the Toledo Police Department. Together with all Catholics, Christians, and people of faith, we denounce any such acts of vandalism.

Bishop Daniel Thomas expresses his thanks to all the members of the community for their concern and support and requests ongoing prayers for protection, healing, and forgiveness.: