'It is time to be vigilant': 29 counties, including Lucas, now at Level 3 Red on coronavirus map 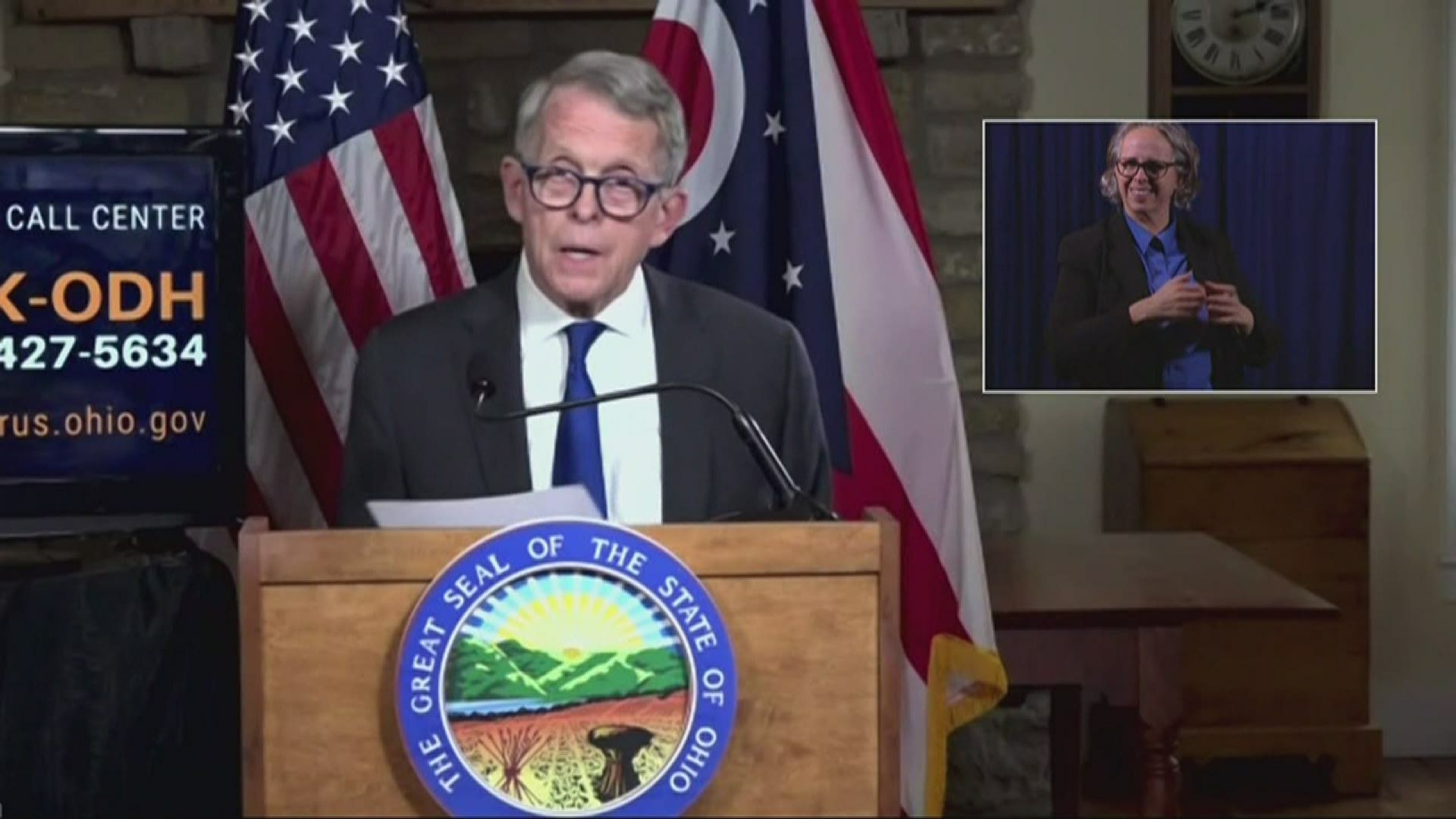 On Thursday, the Ohio Dept. of Health reported:

Thursday's daily increase in cases was the highest since the onset of the pandemic. On Sept. 20, less than a month ago, there were just 762 cases.

DeWine said that there has been a significant change in hospitalizations in that same time period as well. On that same day, Sept. 20, there were 563 COVID-19 patients in Ohio hospitals. That number has nearly doubled, coming in at 1,042.

Daily ICU admissions also hit an all-time high on Thursday, with the largest 24-hour jump since at least April.

Thirteen counties, including Lucas, were added to the Level 3 (Red) category in the state's Public Health Advisory System, making a total of 29 red counties. That is 65% of Ohioans.

On Thursday, there were just seven counties in the Level 1 (Yellow) category.

DeWine said that local health department officials said that most schools are doing a good job. However, they are seeing spread from social gatherings.

"These are not times to be complacent or comfortable. It is the time to be vigilant to protect yourself, your family, your friends and your neighbors," DeWine said.

For months, DeWine has been ranking each of Ohio's counties in order of those with the most cases per 100,000 people to the least.

On Thursday, the top five counties listed had at least three times the Centers for Disease Control and Prevention's (CDC) threshold.

"When looking at the spread of COVID, one of the most important factors is how many cases there are in a population and you look at that for the last two weeks: so it's not historic, it's not something that happened three weeks ago, it's what's happened over the last two weeks," DeWine said.

DeWine likened both the advisory system and the high incidence list to that of a weather forecast.

"You can't make your decisions by only looking at the temperature or only the chance of rain, it's how it all works together," he said.

DeWine said the difference is, that people can't change the weather, but they can change the ultimate outcome of this pandemic by the choices Ohioans make now.

DeWine noted that as we test more, it is expected to see more cases. However, the hope would then be for the rate of positive tests to go down. That is not currently the case in Ohio.

Margolius said that he commonly sees the people testing positive, reporting that they had spent time with family and friends indoors and/or without masks.

He said that spending time with loved ones is important, but that it should be done safely: keep a distance, be outside when possible, wash your hands and wear a mask. Margolius said that it would be really difficult to spread COVID-19 while following all of those guidances.

"It's a harm reduction mentality. If you're going to spend time with people, spend time safely," he said.

Margolius said what he's seen is a "roller coaster" of concern, where people don't see as many cases in their daily lives so maybe they start acting like things are normal.

"It's still here. We're not an island like New Zealand where we can stop cases from coming in. So, we do need to adjust to this new normal," he said.

Dr. Nick Dreher, medical director of the Population Innovation Institute at MetroHealth also hopped on Thursday to explain what Ohioans should take away from the continually updated data.

The strength point, Dreher said, is the hospitalization rate.

"If the hospitalization rate is going up, the disease burden from COVID in Ohio is going up," he said.

When the beds start disappearing from COVID-19, it starts disappearing for every other disease, Dreher explained. However, at this point, Ohio's hospitals are not overflowing and are in good standing.

When it comes to herd immunity, Dreher said that you don't want to achieve that by exposing people to the disease alone. Experts want there to be a vaccine-based herd immunity as that method greatly reduces the death toll.

However, Dreher expressed optimism in Ohio's ability to continue fighting the spread of the virus.

"Ohioans know how to do this, we can do it again," he said.

On Tuesday, the Ohio Department of Health reported:

DeWine said that as testing increases, the hope is to see a drop in positivity. However, this is not the case.

"These numbers have gone up dramatically," DeWine said.

For months, DeWine has created a daily list, ranking counties in order of those with the most cases per 100,000 people to the least.

He noted that these numbers are increasing dramatically each week. In fact, 51 out of Ohio's 88 counties meet the threshold of high incidence, which is just 100 cases per 100,000 people per the Centers for Disease Control and Prevention (CDC).

"Things will get better, but in all likelihood, they will get worse before they get better," DeWine said.

WHAT OHIOANS HAVE ACHIEVED

In an effort to spark optimism in Ohioans ahead of an uncertain future, DeWine chose to focus on what the state has already accomplished in the fight the novel virus.

The state has so far avoided a major spike that would have overwhelmed hospitals, as was seen in Italy, California, New York, etc.

"Despite the great tragedy: 5,000 deaths, many families where a parent... both parents are out of work, we've seen small businesses close, we've seen small businesses struggle, we've seen an increase in people with mental health problems, so this virus has certainly not been benign and we have not been spared. The people of Ohio have not been spared," DeWine said. "But, because of what you have done, we've gotten to where we are today. And we are in better shape than we would have been if you hadn't made the sacrifices."

LOOKING TOWARD THE FUTURE

DeWine said that while no one can predict the future, there is a concern among experts that infections will greatly increase as the colder months settle in and more people are forced to stay indoors.

Already, in the last two weeks, the state has seen significant spread; cases are up, positivity is up, hospitalizations are up and so are doctor's visits, which DeWine called an early indicator.

How we come out of this, DeWine said, will really depend on both what we do as a whole and on how quickly we get a vaccine and how well it works.

DeWine said that he has every indication that President Donald Trump's Operation Warp Speed is working, which is aimed at developing a viable COVID-19 vaccine by the beginning of next year.

DeWine said that most Ohioans can't control how quickly a vaccine is created, they can control their everyday actions.

"If we could get mask compliance up 85-90% in this state we could fundamentally change what the next few months will be like," DeWine said.

DeWine said the goal moving forward is to keep the economy moving and small businesses going. To do that, he said, we have to keep the virus from flaring up.

DeWine acknowledged that pharmacists, nursing homes, colleges/universities, employers and others administering COVID-19 tests may struggle to find a lab to run their samples.

In response, his team launched a new dashboard on Tuesday in an effort to help private entities that are administering tests.

The new Lab Capacity Database provides self-reported information about labs that can run tests, including hours of operation, types of tests they accept, estimated turn-around time, and locations.

It can be found on the Ohio Dept. of Health (ODH) website here.

The federal government also purchased 150 million Abbott BinaxNOW COVID-19 tests and are sending millions to states in an effort to increase their ability to conduct screening testing.

DeWine said Tuesday that he is working with his team to determine how to incorporate these antigen tests into the state testing strategy.

Beginning this week, he said, they are deploying thousands of these tests to state colleges and universities to help them implement the proactive screening plan they recommend. In addition, they plan to aggressively deploy these tests to nursing homes.

"As we have discussed before, lab-based PCR tests are the 'gold standard' and provide the most accurate results.  We know that antigen tests, Binax and others, can have some level of false positives and false negatives," DeWine said.

DeWine called this a "tradeoff" that comes with having tests that allow them to do screening testing, explaining that there are protocols in place to follow up on test results that are most likely to be false. However, he said that people should be aware that this is part of testing at this scale.

"The opportunity to test more broadly and more often makes this an important step forward in our fight against COVID-19 spread, even with the lower sensitivity and specificity of these tests," DeWine said.

However, he emphasized that no tests - not antigen and not PCR - are a substitute for the precautions he has continually pushed for like wearing masks, social distancing and avoiding large gatherings.

"Getting a negative test is not a green light to let down your guard," he said.

He said that while testing is an important tool, but if we are truly going to stay ahead of COVID-19, it will be through acting responsibly and taking care of each other.