The ball was first set in place back in 1896. Since then, it has moved ever so slightly every year. 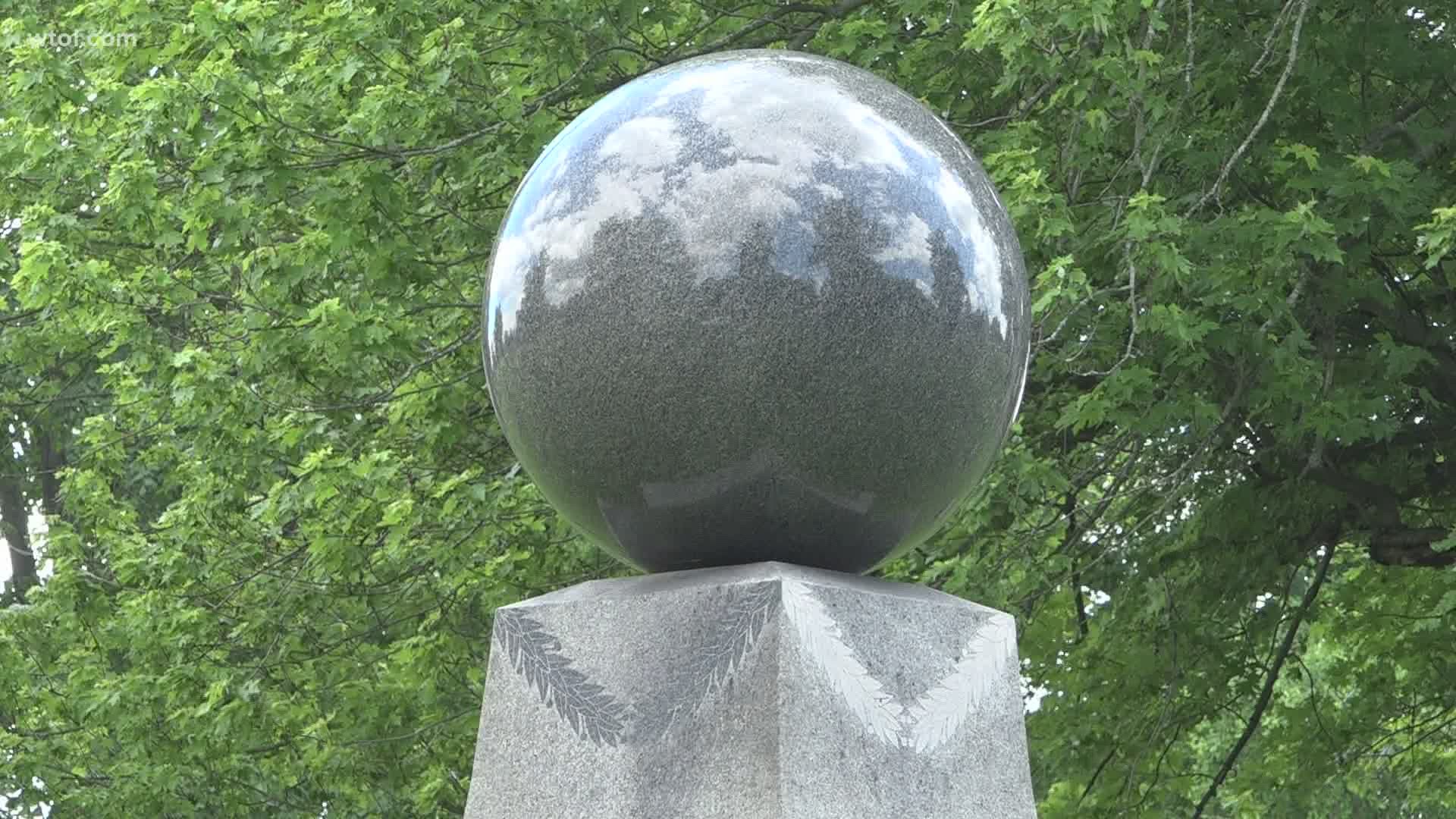 MARION, Ohio — The Marion Ohio Cemetery is an impressive resting place for thousands of souls, 150 rolling acres of monuments and memories from the last 160 years.

The cemetery attracts thousands of visitors a year, but on one hillside, in particular, there is a monument that lures people from all over the world as they ponder the puzzle of the "mysterious-moving ball."

It's a two-and half-ton black granite orb perched atop a 5-foot tall pedestal. An eye-catching display that the wealthy Charles Merchant family created for their dearly departed in the1890's.  The large globe is encircled by smaller orbs to mark the individual graves of those Merchant family members buried there.

But what people by the thousands have come to see over the decades is an unpolished spot, about  inche6s in diameter on the side of granite ball. That's because that spot is supposed to be at the very bottom of the ball, resting on the pedestal.

In fact, that's where it was when the ball was first set in place back in 1896, but over time, the ball began to move and the spot rotated out of its original position. Strangely, it's kept rotating over the years.  And no one knows why.

There are no easy answers, but plenty of theories, however, nothing has ever been proven.  It's a very heavy ball that weighs more than most cars do, so it's not like some prankster is turning it in the middle of the night when no one is watching. What we do know is that it moves slowly. An inch or maybe less each year, some years more than others, those who kept a close eye on it over the years say.

At one point, the family brought in a crane to put it back to its original position, only to see it move again within a year. Shortly, thereafter in 1929, "Ripley' Believe It Or Not" featured it in one of their newspaper syndications.

The ball then became a tourist attraction. It continues to be as numerous websites that traffic is unexplained and the weird, features it in the inventory of Ohio's strange phenomenon.

The popularity of this truly "oddball" occurrence has produced a broad spectrum of ideas and theories as to why and how it could move spontaneously.  Some speculate that it could be the result of water and ice thaw cycles, whereby the annual thaw pushes the ball naturally.

There are others who think it may have to do with some type of gravitational pull, or perhaps, some supernatural vortex that lifts the ball and sets it back down. It is just one of a myriad of other spiritual answers that defy the laws of physics.

The Marion Cemetery keepers say, no one has yet figured it out yet after more than a century. There have even been scientists from time to time that make the pilgrimage to the cemetery to take careful measurements, and photos as they try to decipher this decades-old puzzle.

In the meantime, whatever the answer, people love a great puzzle and mystery, little\ wonder that it's the most popular gravestone in the cemetery.

As this reporter was videotaping the tomb this month,  a local family who lives nearby arrived to also check it out while they were out for a bike ride. Tiffany Watkins says ever since she heard about this mystery she's been coming up to the Merchant grave to take photos to see if the ball really does move, and she says they have noticed some changes over the past few summers. Other records kept by the cemetery also document the movement of the "spot."

While I videotaped Tiffany and others in her group of family and children examining the big polished ball at the gravesite, a curious thing happened.

For what seems to have been no apparent reason or cause, one of the large granite balls surrounding the main monument, tumbled off its concrete pad and rolled onto the grass.  No one was near it when it rolled.

The family couldn't believe what they had witnessed. I was also taken aback. It was a  classic "Wow, That's Weird” moment.

Attempts to roll the ball back onto the platform were unsuccessful as the solid granite ball, a little larger than a basketball, no doubt weighs several hundred pounds and did not roll easily.

How and why it came down off its perch, we may never know, but can only say for certain is that this little curiosity will just enrich the riddle that is Marion's mysterious-moving ball.