Back in the game: Notre Dame Academy basketball player returns to the court after beating leukemia

Laila Rivers is a fighter. But it was a hard journey back to the hardwood after she was diagnosed in 2018 with acute lymphoblastic leukemia. 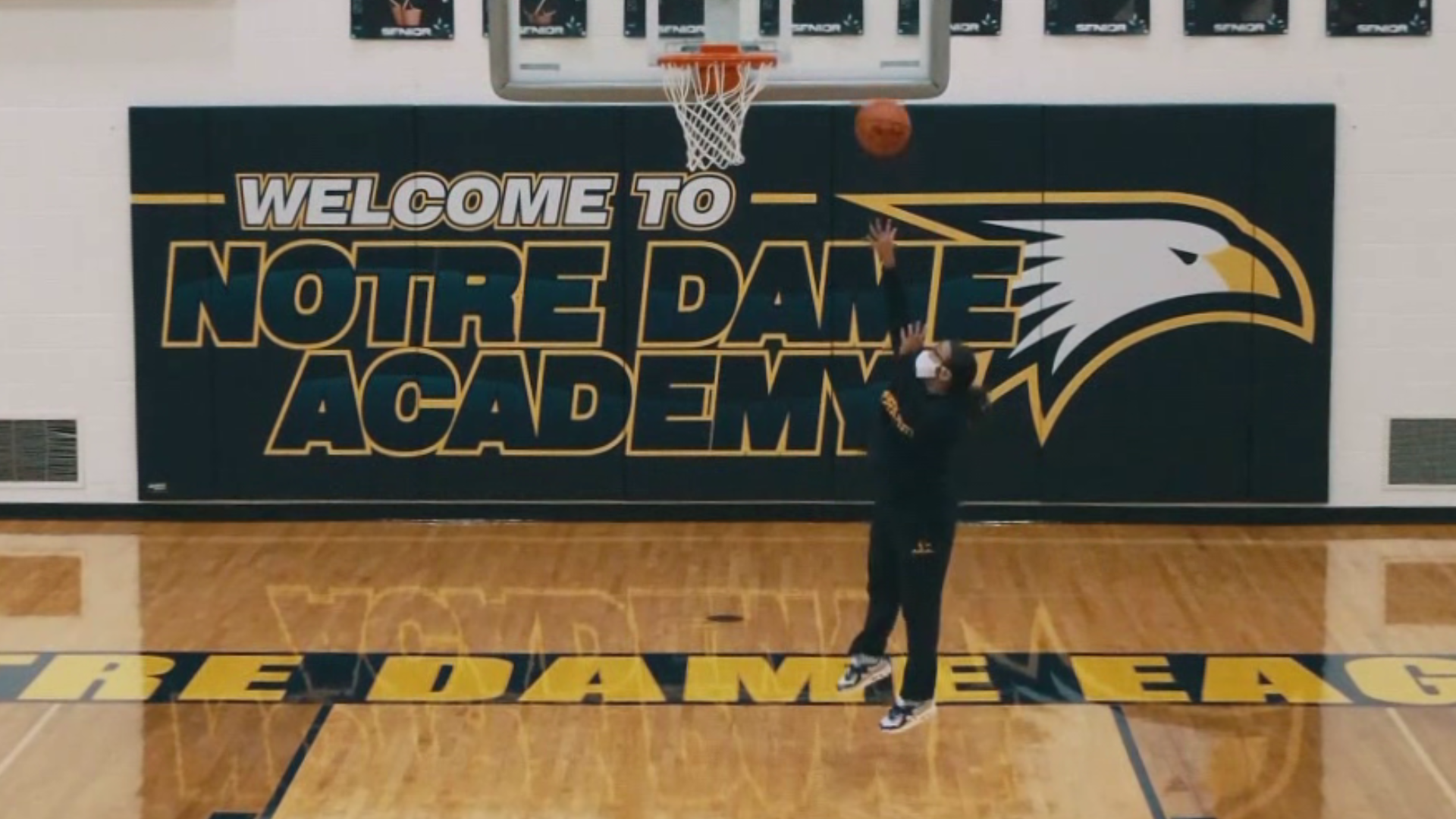 TOLEDO, Ohio — This past week at Notre Dame was a reminder of just what sports means to all of us. It gives us the chance to celebrate. It can be our escape from reality.

For Laila Rivers, sports is what got her through the toughest moments of her life.

13-year-old Laila Rivers was doing what she loves most: playing in a summer basketball game. But something just wasn’t quite right.

Her parents both noticed she wasn’t playing up to her abilities. They thought she was just tired from playing multiple sports at the same time.

But a mother’s intuition led them to a trip to the emergency room. Bad news quickly followed.

“They pulled us out of the room and told us the diagnosis was acute lymphoblastic leukemia," said Laila's mom, Jennifer St. John, "and it was 36 hours after I took her to the ER that she was in surgery to get her port put in, a bone marrow biopsy, a spinal tap and three other chemo's."

“When they told her that, the first thing she said was ‘when can I play basketball and am I going to die?' Those were her only two questions," said Jennifer.

Tough questions for anyone to hear, especially from their own child.

“Actually, the world kind of stops. Because as a parent, you want your kids to have their best possibilities and future in life. But something like that is out of your control," said Lamont Rivers, Laila's dad.

"As a parent, it’s the worst thing you could ever think of. As a parent, when your child, any time they’re ill or sick, you want to be able to protect them and comfort them," he said. "There was nothing we could do. It was pretty much in God’s hands on how everything was going to proceed from there.”

Thankfully, Laila is a fighter. But her journey was anything but easy.

“The first thing I was scared of is when I lost my ability to walk and I needed help everywhere. And I don’t like asking for help, I like to just work for it," said Laila. "And I just kinda thought, 'if I can’t walk, how can I play basketball? How can I just do daily things by myself?' And it’s kind of scary. You don’t think you’re getting your normal life back any time soon.”

“We knew it was going to be a struggle. It’s nothing you would wish on your worst enemy," said Lamont. "But, that’s kind of how life is. Like, you get thrown certain things and you gotta figure out how you’re going to adjust. And you just gotta kinda push forward, that’s been our motto. You kinda just push forward, regardless of what’s in front of us, we just attack it and go with what we can do.”

Credit: WTOL 11
14-year-old Laila Rivers, honored by teammates at a Whitmer volleyball game when she was a freshman, just months into her fight against leukemia.

Laila's journey was a long one.

For over a year, her family spent most of their days inside a hospital. Laila never gave up her love for basketball. Her dad brought a small basket in to her room so she could always work on her shot.

Finally, after well over a year, Laila got the news she’d been waiting for. It was her turn to ring the "victory bell."

She was cancer free.

Once she left the hospital, she had a surprise waiting for her back at Notre Dame Academy. Her friends were lining the hall to celebrate.

The hardest part was over.

Laila was back home.

But now, the work to get back on the basketball court began.

That led to this moment. Her first game back. Playing for the Notre Dame junior varsity team with a nervous family watching on.

“During warm-ups, I was just kinda like talking with the team, we were getting hyped. I was thinking to myself, even if I don’t get to play, just the feeling of having fun times with my teammates, cheering everybody on, I was like ‘I’m fine with just cheering them on tonight,’" explained Laila. "But when my trainer came up to me and told me I was going in, I just couldn’t think. I was just like ‘I’m ready! I’m ready to go in!’”

Laila was back in the game.

For the first time since June 6, 2018, she returned to the place that she loves so much.

“I left my follow-through up 'cause once it left my hand, I just knew that was the shot. That one was the one," said Laila with a smile. "And I look over at my teammates and they’re all jumping and happy. And, it felt like the weight was off my shoulders. That all the work I had to do to get back to that moment, it was all worth it.”

“When she ran over to me crying, it was just tears of happiness and you could just see the weight just coming off of her shoulders, because she’s had it on there so long. She just wanted to feel the floor," said Jennifer.

“It’s just a reminder for us about that sports is just to take us away from everything. For a few moments in this gym, nobody cared about politics. Nobody cared about all the divide that was going on in our country right now," said Dane Franklin, Laila's JV coach. "The only thing that mattered was a kid fights through a lot of adversity and it pays off.”

“She inspires me. Still to this day. If she can go through what she went through, I can never complain. There's nothing I can complain about," said Lamont. "As long as she knows, she’s going to be my inspiration for life. I’m proud to be her father.”