BGSU Women come up short in bid for MAC Title

The Falcons won the regular-season title and were trying for their first tournament title since 2011. 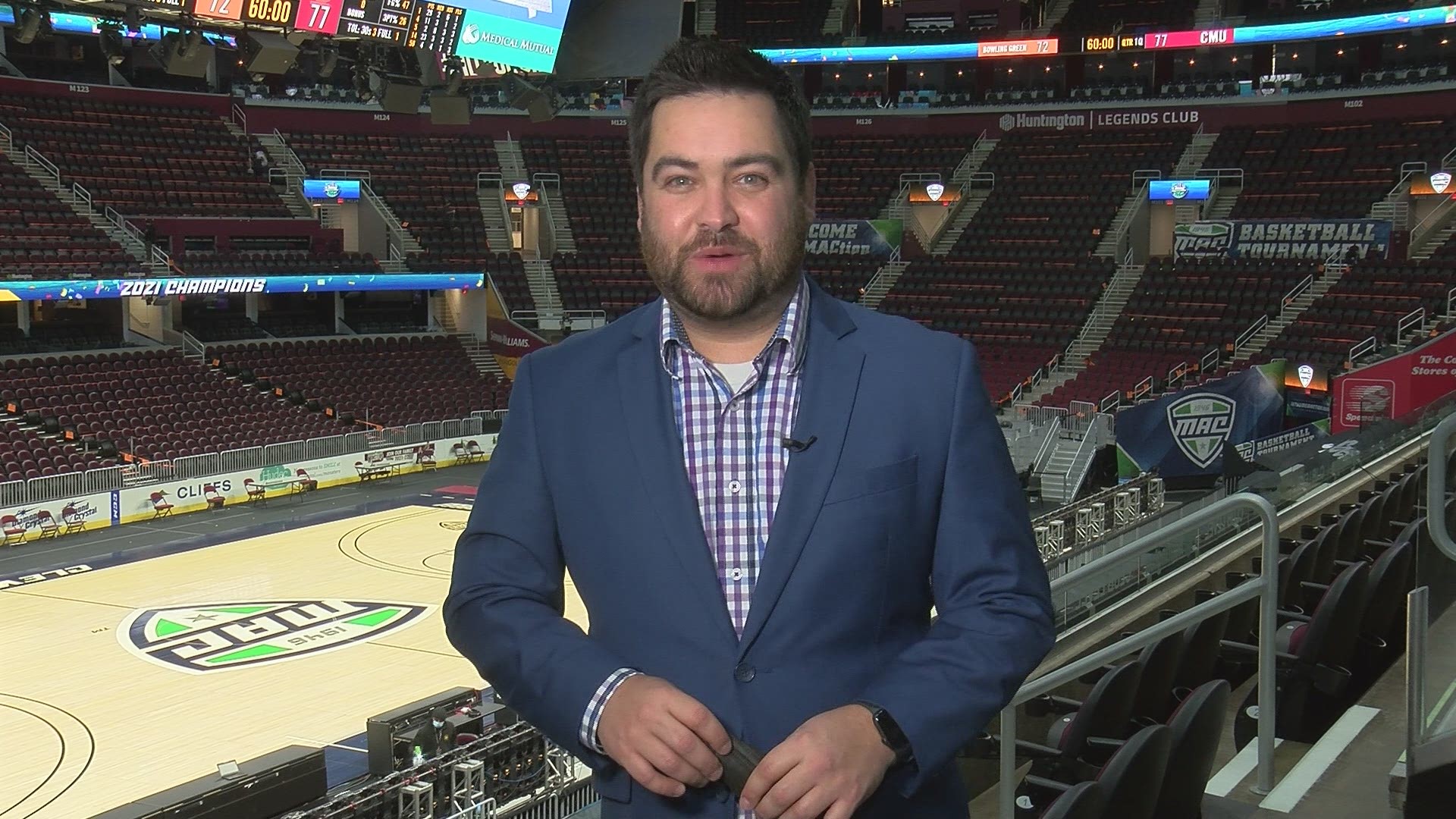 CLEVELAND — It’s officially MAC Tournament week and the WTOL 11 Sports team is in Cleveland you bring you the latest.

Central Michigan is the MAC Tournament Champ. They beat BGSU 77-72. Bowling Green's magical run comes to an end in the title game. This young team will have to wait to see if the NCAA gives them an at-large bid now.

It's been a magical season, but the BGSU Falcons come up just short. They fall in the MAC title game, but there is so much to look forward to with this group.

Bowling Green is in some serious trouble for the first time today. CMU is up 53-41 halfway through the 3rd quarter.

Falcons had a 12 point lead with 6:18 left in the half. CMU finished strong.

Elissa Brett and Kadie Hempfling lead BGSU with 9 points each.

The BGSU women are on the floor and it's time to play. The Falcons are trying to punch their ticket to the NCAA Tournament for the first time since 2011.

Toledo is down 61-50 with 11:34 left. Marreon Jackson is doing his best to keep the Rockets season alive. He's got 19 points. Toledo is going to need a huge comeback late.

The Rockets are struggling at halftime. They're down 43-31 and shooting just 23% from three. They've got 20 minutes to get it turned around.

Toledo is trailing Ohio 35-25 with 3:34 left in the 1st Half. Ohio has a 19-13 advantage in rebounds. Marreon Jackson has 6 points for Toledo but he's going to need some help.

It's time for tip-off here in Cleveland. The Toledo Men's Basketball team is set to battle Ohio in the first semifinal of the night. Follow along as the Rockets try to punch their ticket to the MAC Championship game.

The BGSU women will face-off against Central Michigan in the MAC championship game on Saturday at 11 a.m. The game will be televised nationally on CBS Sports Network.

Noon: FALCONS WILL PLAY FOR THE TITLE

The BGSU Women will play for a MAC Title.

The Falcons continue their magical season by absolutely dismantling Buffalo. What a performance. They win it 80-67.

BGSU knocks off Buffalo 80-67 and will play Saturday for the MAC Tournament championship and an automatic berth in the NCAA Tournament.

Bowling Green is leading Buffalo 54-46 after 3 quarters. Elissa Brett has 16 points. Lexi Fleming is up to 11 points in the game for BG.

After 1 quarter, Bowling Green leads Buffalo 19-15. Kadie Hempfling has a game-high 9 points. Madisen Parker has come off the bench and hit a couple three's to give BGSU the early lead.

Lexi Fleming left the Quarterfinal game with a shoulder injury and did not return. She's on the floor now warming up for BG and it appears she will play in today's game.

The BGSU women have taken the floor for the MAC Semifinal & Lexi Fleming is out there. She looks ready to go. pic.twitter.com/mfiRQOEtAx

We've made it back to Rocket Mortgage Fieldhouse for the MAC Semifinals. The BGSU women will take on Buffalo at 10 a.m. Follow along here for updates.

I asked Michael Huger about the speculation that he could be taking another college basketball job. He shot that down. See the tweet below for video.

I asked Michael Huger about the speculation of him leaving BGSU for another job...he shot down the rumors and guaranteed he would be back with Bowling Green next season... pic.twitter.com/1wZQ94BOz1

Akron is clinging to a 57-53 lead with 7:41 left. BGSU's Daeqwon Plowden has put the team on his back. He's got 22 points. He scored 15 straight points for Bowling Green in this second half.

7:56 p.m.: FALCONS HANGING AROUND AT HALFTIME

It's halftime and Bowling Green trails 34-26. The Falcons shot just 31% from the field and Justin Turner only has 2 points, but BG is still in this thing...

6:45 p.m.: FALCONS WARMING UP AHEAD OF GAME AGAINST AKRON

Justin Turner was injured in their last game of the regular season and came out of the locker room minutes after the rest of the team to join shootaround.

HOLD UP. TURNER IS HERE AND ON THE FLOOR. He just came out about 5 minutes after everyone else.

Toledo head coach Tod Kowalczyk showed plenty of emotion after defeating Ball State. He said that he has started to appreciate every single win even more.

Tod Kowalczyk knows how hard it is to win in the MAC tournament...he didn't hold back on the celebration after today's win...and he explains why here... pic.twitter.com/DPcLvr36Tx

Toledo avoids a scare in the MAC Quarterfinals. The Rockets win 91-89 in OT to advance to the MAC Semi's.

Toledo wins 91-89 in OT. The Rockets will play in the MAC Semi’s tomorrow. Wow. pic.twitter.com/oqOH2zkQDb

Marreon Jackson makes both FT’s. But Jaaron Coleman goes coast-to-coast to tie it.

The Rockets have scored just 7 points in the first 8 minutes of the 2nd half. They're 6-20 from three as a team.

The Cardinals have rallied back to tie the game up at 22 with 7:53 left in the first half.

The Rockets are red-hot to start this game. Spencer Littleson & Marreon Jackson have both hit a three early.

Wow. What a start.

The No. 1 seeded Rockets take on Ball State at 11 a.m. in the MAC Quarterfinals.

The No. 1 seeded Bowling Green State University women are moving on to Friday's MAC semifinal game with a 63-47 victory over the Eastern Michigan University Eagles.

It wasn’t always pretty, but the #1 seed BGSU is moving on!

The Falcons have taken a 51-40 lead over EMU with 4:41 left to go in the fourth quarter in Cleveland.

Lexi Fleming is back out and has her shoulder wrapped with ice. pic.twitter.com/z7VMEvuiyB

Lexi Fleming was hit hard while going out of bounds by an EMU player and suffered a likely shoulder injury. She grabbed at her shoulder appearing to be in a lot of pain and headed to the locker room. Fleming is the Falcons' leading scorer with 16.9 points per game.

Just awful news for the BGSU women...Lexi Fleming just went to the locker room with a shoulder injury...she was hit hard going out of bounds.

She's the Falcons leading scorer at 16.9 ppg. It didn't look good at all. She was in a lot of pain.

The Falcons are on a 15-4 run to start the second half and have taken a 36-35 lead after being down 10 late in the first. BGSU closed the gap to grab the lead with 3:26 left in the third.

No. 1 seed BGSU is in some trouble here. They’re down 10 with 1:54 left in the first half. BG is shooting 26% from the field and 18% from 3. They’ve had some wide-open looks that just haven’t fallen. Very uncharacteristic of this team.

Credit: WTOL 11
The Falcons huddle in the first half of the MAC Tournament at Rocket Mortgage Fieldhouse in Cleveland on March 10.

The MAC All-Conference Awards have been announced.

On the Men’s side, Toledo is well-represented. Marreon Jackson is the Player of the Year. Tod Kowalczyk is the Coach of the Year. Ryan Rollins is the Freshman of the Year. Spencer Littleson was named to the 2nd Team All-MAC and the All-Defensive team.

For Bowling Green, Justin Turner was a first-team selection. Daeqwon Plowden was a Third-Team selection. Trey Diggs was the Sixth Man of the Year. Kaden Metheny and Josiah Fulcher were named to the All-Freshman team.

We’ve made it to Cleveland for the MAC tournament.

The #1 BGSU women play at 11 am. pic.twitter.com/cwHrZBJIj3 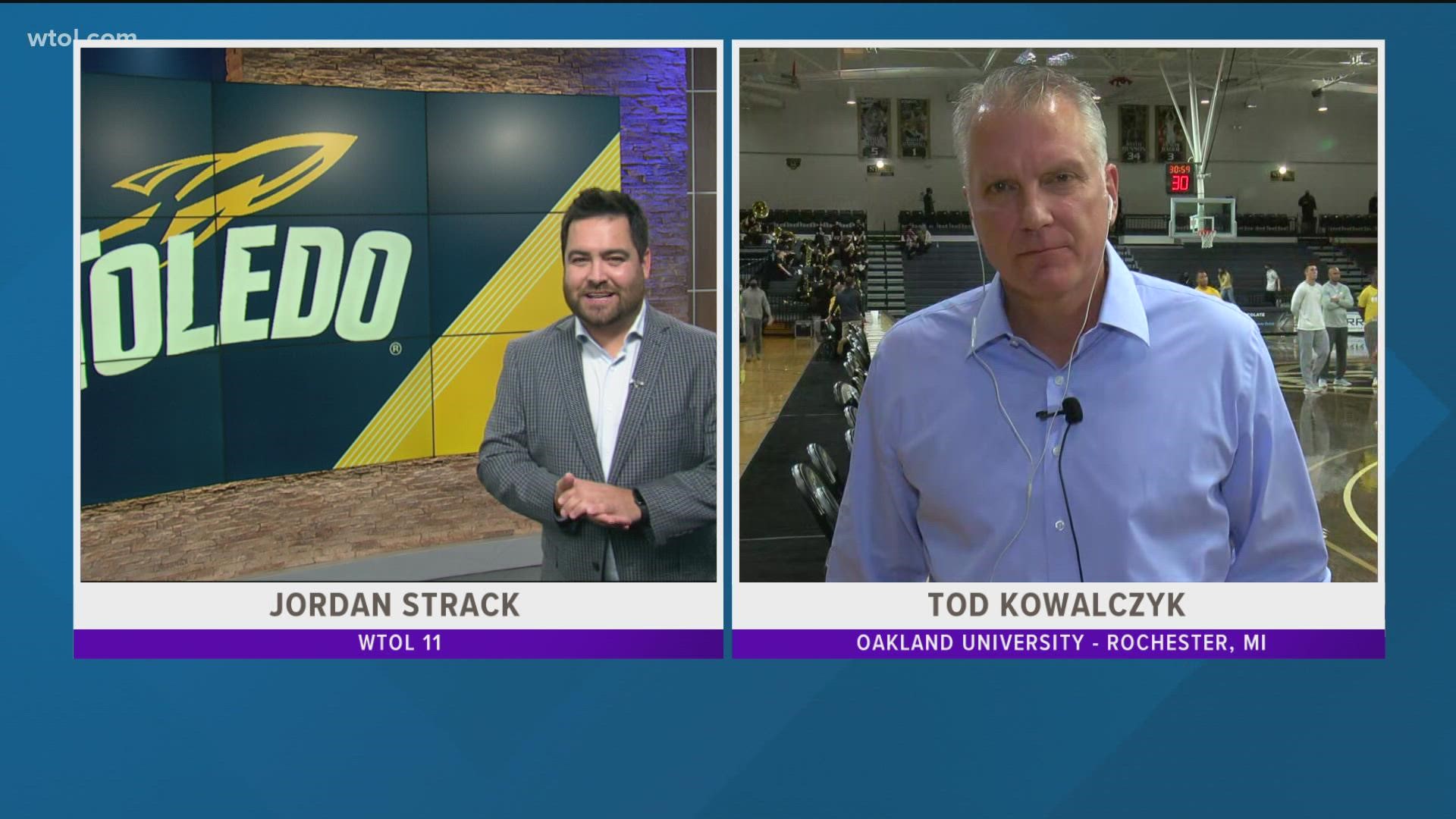