Andrew Brenner was joined by an anti-vaccination advocate who was indicted for joining the Jan. 6 raid of the U.S. Capitol, among others. 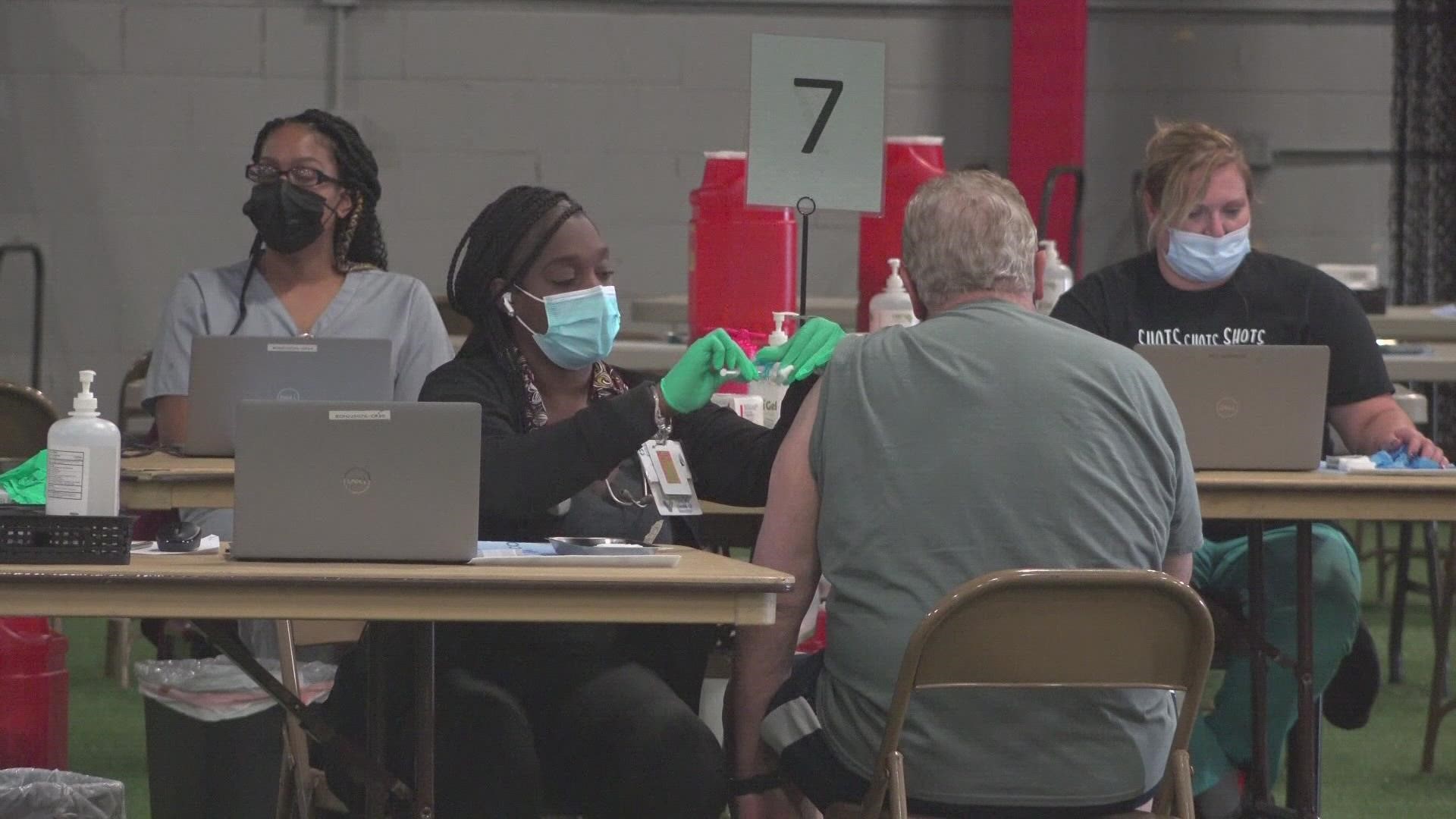 COLUMBUS, Ohio — An Ohio senator joined a conference of anti-vaccine advocates hyping “alternative” COVID-19 treatments, several of which like ivermectin and hydroxychloroquine are explicitly warned against by regulators, public health officials and medical associations.

State Sen. Andrew Brenner, R-Delaware, was introduced as a “surprise special guest” amid a panel that included an anti-vaccination advocate who was indicted for joining the Jan. 6 raid of the U.S. Capitol; a cardiologist who recommended people gargle diluted bleach to prevent COVID-19; and a discredited biologist who claimed the CDC is “cooking the books” in counting coronavirus cases.

The webinar was hosted Oct. 7 by Children’s Health Defense, an anti-vaccine advocacy organization that demanded this summer that the CDC “halt” the administration of COVID-19 vaccines to minors.

The event’s emcee prefaced the webinar with a disclaimer that nothing offered at the seminar is a replacement for medical advice or treatment. Speakers then went on to erroneously claim that vaccination against COVID-19 is “risky” but treatments that the CDC, American Medical Association, and others warn against are safer bets.

RELATED: No, you cannot inhale or ingest hydrogen peroxide to treat COVID-19

Brenner told viewers that he will introduce legislation in two to three weeks called the “COVID-19 alternative therapies” act.

“Basically, it’ll say that you can’t be discriminating against people or information that deals with alternative therapies, such as what you’ve been discussing today,” he said. “Social media and the press have basically suppressed all this information. I learned a lot this evening in the short time I’ve been listening here.”

Several speakers on the panel touted the purported benefits of ivermectin, an anti-parasitic in humans and dewormer in livestock that has grown in popularity in conservative circles, as a preventative and treatment for COVID-19. Health officials, private practitioners, and even the drug’s manufacturer warn that there’s no evidence to support its use against COVID-19 and it can have dangerous side effects.

Along with ivermectin and hydroxychloroquine, speakers championed some lesser-known “alternative” treatments and preventatives including antibiotics (which do not combat viral diseases like COVID-19).

The emcee, a man named Kedarji who operates a wellness center in Youngstown and has equated “pandemic hysteria” to the “extermination of the Jews by the Nazis,” said at the conference that ginger root, garlic and turmeric could help prevent symptoms from presenting themselves after a coronavirus infection.

Not a single speaker, according to video of the 140-minute conference provided to the Ohio Capital Journal by self-described vaccination advocate Sarah Barry, recommended people get vaccinated.

“If somebody agrees with ivermectin or some of the other stuff you guys have been talking about this evening, it should not be censored by the press or our social media platforms,” Brenner said.

He did not respond to emailed inquiries.

The panel speakers all have lengthy history disseminating inaccurate information about COVID-19.

Dr. Simone Gold, founder of “America’s Frontline Doctors,” led off the webinar. AFD formed in 2020 and has regularly sought to sow doubt into public discourse surrounding the efficacy of masks and vaccines.

RELATED: Yes, COVID-19 is the leading cause of death for on-duty law enforcement officers so far in 2021

Its doctors earned $15 million on consultations and prescriptions for treatments like ivermectin and hydroxychloroquine, which have been long been declared bunk by health officials and experts, according to hacked data provided to The Intercept.

“If your doctor won’t write you a prescription, go to [AFD’s website] … you sign up for telemedicine consult, and then they can mail the meds right to your home,” she said.

Federal prosecutors have accused Gold criminally of several offenses related to her entrance into the U.S. Capitol during an insurrection Jan. 6 seeking to block congressional certification of the presidential election. She pleaded not guilty. Court documents indicate she’s in talks with prosecutors over a possible plea agreement.

“Even sodium hypochlorite, a few drops of household bleach in about 6 or 8 ounces of water, also can be gargled and spit out,” he said.

Bleach is a strong and corrosive alkaline. Even gargling it in diluted form is dangerous, according to Dr. Leanne Chrisman-Khawam, a physician and professor at Ohio University’s Heritage College of Medicine. She said the chemical isn’t meant to contact human skin or mucous membranes like the mouth and throat.

McCullough is a regular guest on news outlets like Newsmax, OANN and Fox, where he has claimed there’s no clinical reason to seek vaccination against COVID-19, which has killed more than 726,000 Americans. He’s currently locked in litigation with his former employer, a large hospital network in Texas. The hospital alleged McCullough breached a separation agreement that compelled him to refrain from identifying himself as affiliated with the hospital network in his media appearances. His doing so caused “irreparable reputational damage and business harm,” the hospitals alleged. McCullough denied the accusations.

After Brenner spoke, a biologist with no medical background identified as a biomedical researcher named James Lyons-Weiler addressed viewers. He claimed the CDC’s COVID-19 testing technology is “baloney” and accused the agency of “cooking the books.”

A special court in the U.S. Court of Federal Claims, specifically created to review allegations of vaccine injury (a tremendously rare but nonetheless real occurrence), rebuffed Weiler’s testimony last year.  Weiler testified in support of a Kentucky man who claimed he was permanently disabled from a flu vaccine.

A judge overseeing the case noted other cases in which Weiler was found to be “wholly unqualified” to opine on whether a vaccine caused injury and noted Weiler has studied zoology and ecology, not medicine or immunology.

“Mr. Lyons-Weiler’s willingness to opine upon a topic on which he seems to possess no qualifications renders suspect his credibility,” wrote Special Master Christian Moran in an opinion for the court.

Brenner is among the most extreme members of the Ohio Senate on pandemic-related matters.

In June, he introduced an amendment to legislation that eventually became law, prohibiting schools and colleges from either requiring that students take a vaccine that’s available under emergency use authorization from federal regulators (as opposed to fully approved).

In a speech on the Senate floor at the time, he cited a study from a Swiss medical journal that claimed two people die for every three people saved by vaccination. The journal later retracted its findings, calling them “incorrect and distorted.”

Brenner has pushed legislation to prohibit schools from requiring students or employees to wear face masks.

Just weeks into the pandemic, Brenner’s wife in a Facebook post equated Ohio’s early response to the emerging pandemic to the Holocaust and life under Adolf Hitler’s regime in Germany. Brenner commented in the post, assuring that “we won’t let that happen in Ohio.”