Inside the Five released a statement saying it's 'disappointing' a worker came in feeling ill and sent her home, saying it has health and safety protocols in place. 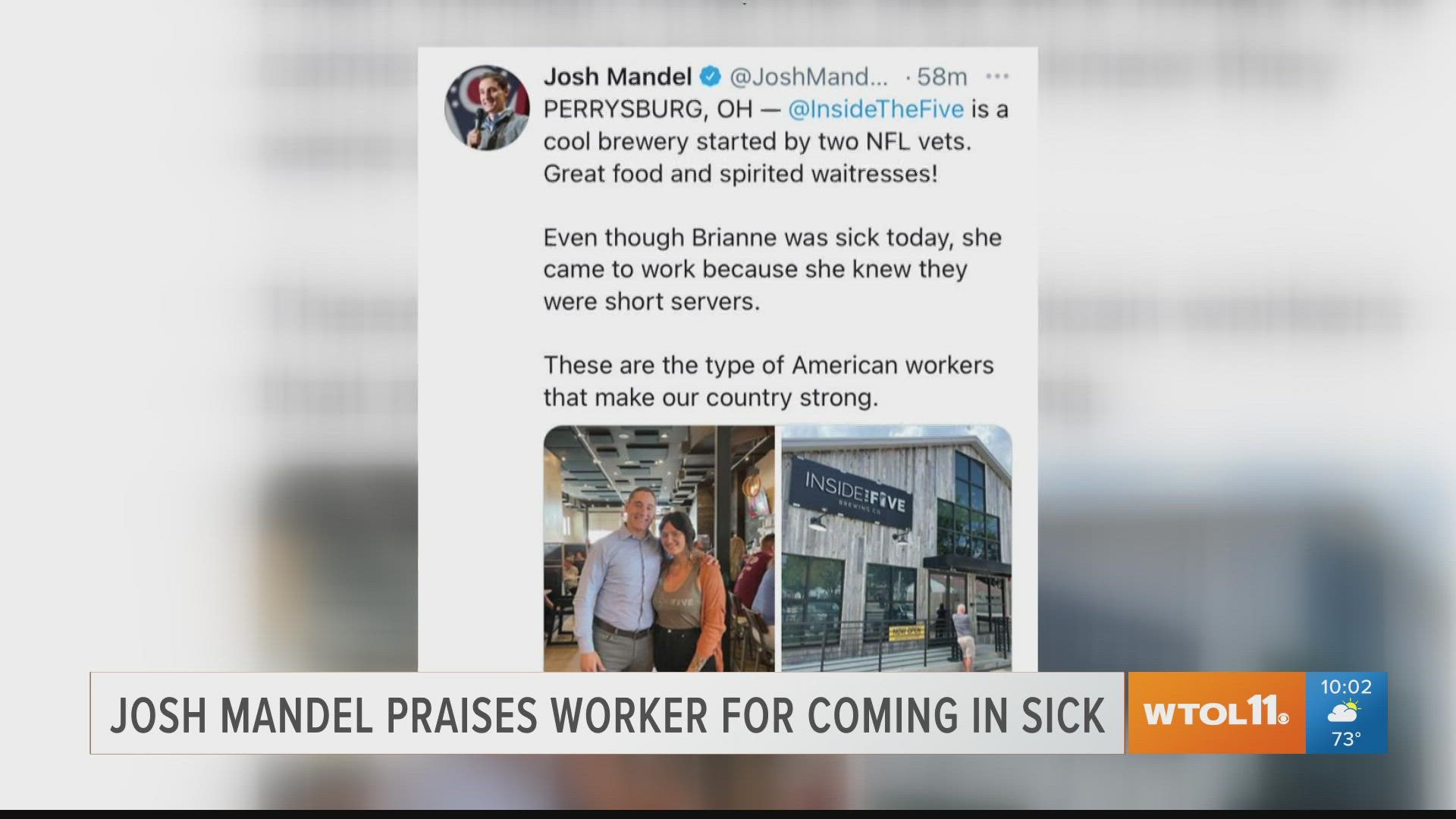 PERRYSBURG, Ohio — U.S. Senate candidate Josh Mandel posed with a restaurant employee in Perrysburg who came to work Friday despite not feeling well to help the short-staffed brewpub, saying she is the kind of employee that makes "our country strong."

Mandel, a Republican who is running for the seat held by the retiring Rob Portman, visited Inside the Five Brewing Co. in Perrysburg, where he encountered the woman.

In a tweet posted to his account, Mandel praised her for coming in despite not feeling well to help the short-staffed establishment.

Even though Brianne was sick today, she came to work because she knew they were short servers.

These are the type of American workers that make our country strong. pic.twitter.com/o0VFkDkjuo

On Thursday, the worker in question broke her silence and said in a Facebook post she does not have COVID-19.

Brianne included a screenshot of her negative test result.

Last week she mentioned that her voice sounded nasally from a cold, restaurant management said, and she has been instructed to not return to work until she has been tested.

Management further said that employees are instructed to never come to work with any symptoms of an illness and that the brewpub is strict with health protocols.

The brewery issued a statement to WTOL 11 on Friday afternoon:

"This is so disappointing. Last week we sent a message to our staff saying that they should report any symptoms, big or small, to a manager, and not come to work. And no one should just assume it’s allergies or a cold. Although our server's intentions were good, it was not the right decision and it will be addressed. Yes, we are short-staffed, but would close our doors before we put anyone at risk. The employee has since been sent home.”

WTOL 11 spoke with Inside the Five on Saturday. They say the employee has been told she needs to take a COVID test before she is able to come back to work.

They also say the restaurant has instituted a policy at both their locations in which servers will have to wear masks.

Reaction to Mandel's tweet was overwhelmingly negative. WTOL 11 has reached out to his campaign for further comment.

You're literally boasting about forcing a sick worker to work. That's extremely abusive and unsanitary, an act of violence against your workers, your customers, and the larger community.

Cool cool cool Josh, letting everyone know that this restaurant allows sick workers to serve their customers. I'm sure this will be a big boost for them! Also, can someone call the health department?? 🤢

I don’t know if you know this, but we’re living through a pandemic at the moment.

U. S. Rep. Tim Ryan, one of the leading Democratic candidates for the Ohio Senate seat Mandel is running for, also weighed in on Twitter on Friday.

If you were serious about celebrating workers, you’d join me in calling for higher wages & paid time off.

Telling people to go to work sick — whether COVID or a cold — and then attacking small businesses to score political points is gross, Josh. Grow up. https://t.co/OtzW4H2tih

According to data from the CDC, Wood County is experiencing "high" COVID-19 transmission, meaning there are more than 100 new cases in the past seven days per 100,000 people.

Inside the Five has COVID-19 precautions and regular health and safety protocols in place inside the establishment. Records show it has not been issued any COVID-related violations during the pandemic.

Since the initial tweet Mandel came out with this follow-up response late on Friday night:

Hey @InsideTheFive, instead of giving into the woke mob, how bout having your employee’s back and giving her a raise.

While so many people are getting paid to sit home and do nothing, Brianne muscled through feeling under the weather and came to WORK. https://t.co/KodnrOiHMZ

Mandel posted a video in June to his Twitter account of him lighting a mask on fire with the caption "FREEDOM." This week, he responded to a reporter's question about getting children vaccinated against COVID-19 by saying the question was "immoral" and "unethical."