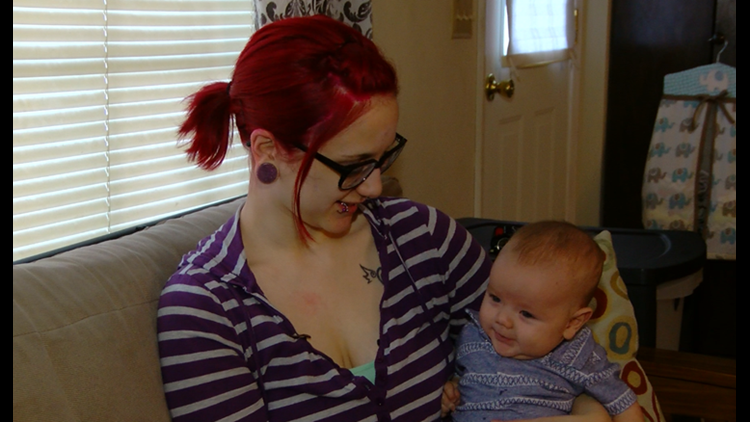 Paige Martin says she was with her husband and 3-month-old son getting ready to order dinner when her baby began to cry. She started nursing him at the table and that's when she says a Pizza Hut server publicly embarrassed her.
Author:
Published: 9:56 PM EDT March 28, 2016
Updated: 10:50 PM EDT July 24, 2018

WAUSEON, OH (WTOL) - A Northwest Ohio woman says an employee at an area Pizza Hut asked her to leave when she began breast feeding her child.

Page Martin says she was with her husband and 3-month-old son getting ready to order dinner when her baby began to cry. She started nursing him at the table and that's when she says a Pizza Hut server publicly embarrassed her.

"I was approached by an employee there who asked me if I could cover myself up with a blanket and I said 'no it's my right because he won't eat with a blanket over his head,'" said Martin.

She says she was wearing two shirts at the time and tried to cover herself as best she could, but when she refused to cover up with a blanket the Pizza Hut employee asked her to move to a less populated area of the restaurant.

"She said 'well could I get you to move to a private booth because we have some parents here who don't want to expose their children to that,'" said Martin.

Paige says she told the employee it's her legal right to breastfeed her child in public, and according to her what happened next broke the law.

"That's when she said 'well I'll have to ask you to leave,'" said Martin.

Ohio law states that a mother is entitled to breast-feed her baby in any location of a place of public accommodation wherein the mother otherwise is permitted.

Paige says she would like a public apology from Pizza Hut.

WTOL reached out to Pizza Hut for a response. The local restaurant in Wauseon declined to comment on camera, but sent WTOL a statement from its corporate office:

"Pizza Hut fully supports state law regarding a mother's right to breastfeed in our restaurants.  While this customer was not asked to leave the restaurant, but rather offered another table with greater privacy, we deeply apologize that this situation in anyway upset her or if she felt mistreated. We will take this as an opportunity to further train our employees."

But Paige maintains she was asked to leave and she wants to make sure this type of situation doesn't happen again.

While Ohio law does say public establishments like Pizza Hut must allow mothers to breastfeed, there's no enforcement provision. That means even if the restaurant did ask her to leave, there's no legal consequence.