A Lucas County grand jury returned a "no bill" decision, resulting in no criminal charges against the officers involved in the June shooting of Victor Dale Jr. 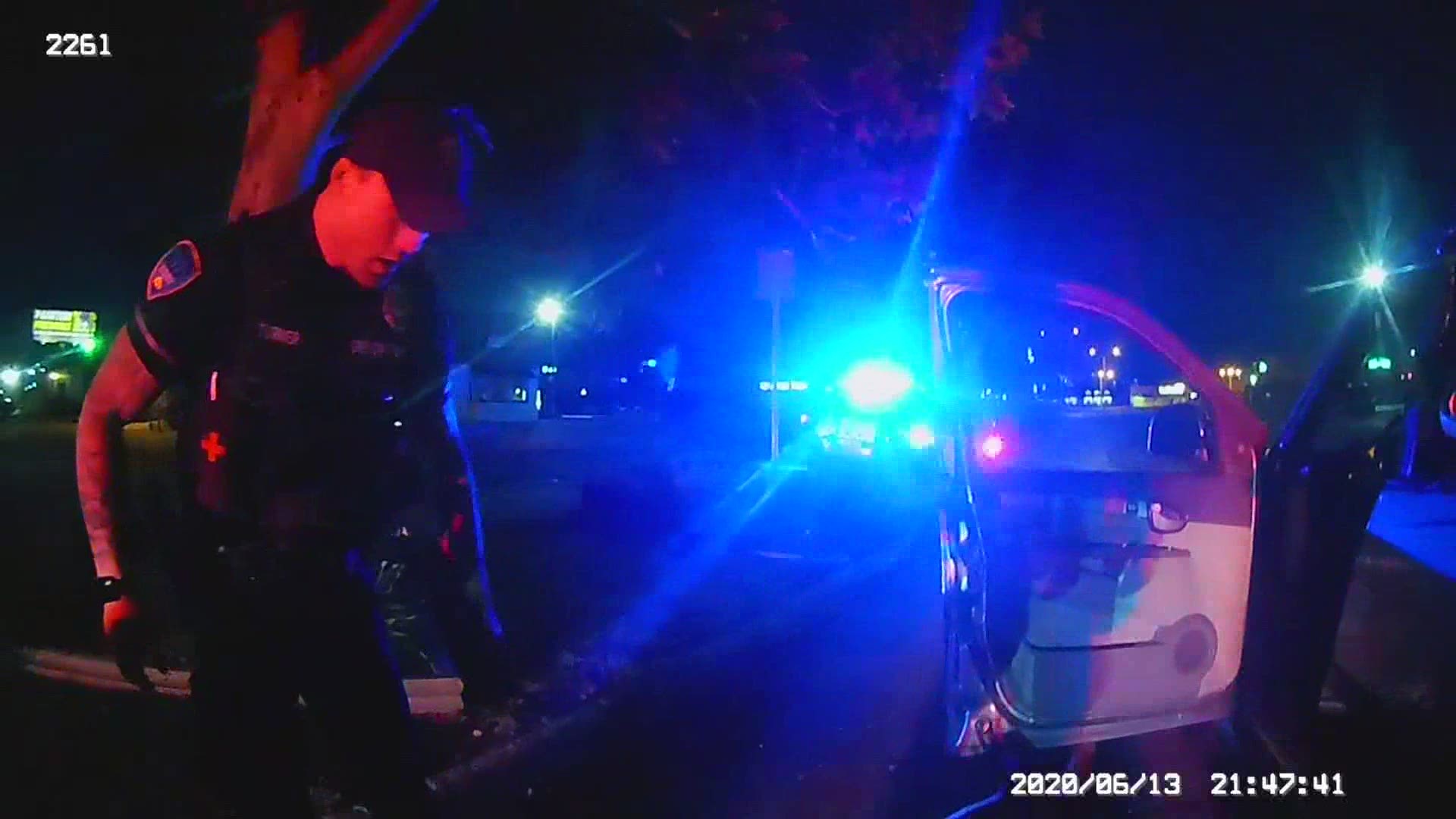 Two Oregon Police officers will be suspended for 30 days without pay for the   the shooting of Victor Dale Jr.

This comes  a week after a grany jury decided not to file criminal charges against 25-year-old Officer Joel Turner and 28-year-old Logan Nitkiewicz and instead served each officer with a formal disciplinary charge.

Of the 30 days, 15 of them will be in abeyance for one year. Both officers will have to serve a 15-day suspension without pay and will undergo additional training.

Both officers accepted the charge with no contest. There will be no appeal.

Victor Dale Sr, Victor Dale Jr.'s father, responded to the disciplinary action. He said he's disappointed because he believed the officers used excessive force and "they could've ended up killing someone else."

A grand jury has decided that no criminal charges will be filed against Oregon Police officers in the shooting of Victor Dale Jr.

The shooting took place back in June of this year.

He began by discussing the department's response to the shooting, which involved Oregon police officers Logan Nitkiewicz and Joel Turner firing a total of 21 shots at Victor Dale Jr., striking him once in the shoulder and once in the neck as he began to drive away from the scene of a domestic violence incident. While pulling out of the parking lot, he struck Officer Turner with his car.

Dale Jr. was hospitalized following the incident and Officer Turner was treated for minor injuries.

"I thought that was the right thing to do to bring in the independent investigation. Julia Bates, our Lucas County prosecutor, also made the decision at that time to have a special prosecutor appointed by the Attorney General’s office.

"And two things happened this week. Yesterday, we had our Firearms Review Board hearing, we intentionally delayed that, we wanted that to occur in conjunction with the grand jury hearing. Which we found out, I believe about nine days ago, that was going to occur today."

"So we’ll talk about the grand jury first. The grand jury was convened in Lucas County in downtown Toledo at 10 o’clock this morning. The presentation was made by the state Bureau of Criminal Investigation and an attorney from the A.G.’s office, his name is Anthony Pierson, he’s stationed in Columbus. Oregon Police Division had no involvement in this investigation that was presented today to the grand jury and the Lucas County prosecutor’s office had no involvement in the presentation.

"And I was informed about 1:30 this afternoon that the grand jury had reviewed the testimony, reviewed the evidence, reviewed the video, and determined that there was no criminal wrongdoing on the part of the officers. They issued what is called a 'no bill.'"

The "no bill" means that the grand jury determined charges would not be pursued against the officers.

Navarre also explained the process of the Firearms Review Board, which investigated the discharge of weapons by both officers during the incident, and the conclusion the board reached independently from the grand jury and state investigation.

"Yesterday at 9 a.m., our Firearms Review Board convened here at the Oregon Municipal Complex. It was comprised of five members. Four members of the Oregon Police Division and one member of the community, as dictated by our policy procedure. They looked at the actions of the officers in terms of the discharge of the firearms. And, because there were a total of 21 shots fired and this was a moving scenario, the review panel made two decisions.

"The first decision was that the initial shots fired by both officers, probably one, two, or three - not more than three shots by each of the officers when the vehicle was pulling forward and struck Officer Turner, those shots were justified.

"The review panel then looked at the remaining shots for both officers, the shots that were fired as the vehicle was pulling away. The panel voted that those shots were not justified. It’s important to make that distinction. The initial shots were determined to be justified and the subsequent shots were ruled to be unjustified.

"That report was submitted to me, as the chief of police, and I concurred with their recommendations."

"I can’t discuss any potential outcomes of that hearing until that occurs. But, met with both officers today, served them with the charges, and informed them of what is going to occur next week."

GRAND JURY RULING DID NOT INVOLVE CONSIDERATION OF DALE JR. AS SUSPECT

While the grand jury ruled on Dale Jr. as a victim, they did not consider his actions that night during the incident.

Navarre stated there are potential charges that may be made against Dale Jr., including domestic violence, operating a vehicle while intoxicated and felonious assault of an officer for hitting Officer Turner with his car.

"I talked to Julia Bates, it is her intention to either have the same special prosecutor take that matter before a separate grand jury or to bring in another special prosecutor to do that. Specifically, we are looking at the initial reason for the interaction by the police officers, that being domestic violence.

"There’s potential operating while intoxicated charge. And the third charge they would look at would be the felonious assault of the officers with the vehicle. So that will be looked at at a later time hopefully within a couple weeks by a separate grand jury.

"In terms of when the officers will return to duty, that decision will be made in conjunction with the disciplinary hearing which is scheduled next Thursday at 9 a.m."

Both officers have been on paid administrative leave since the night of the shooting.

Multiple protests calling for police accountability followed after the incident.

As Navarre took questions from the media, a protest began in disagreement of the grand jury's decision.

Activist Julian Mack began speaking outside the police station on a bullhorn, resuming calls for accountability.

"We are blessed to have Victor here and alive," he said. "He's a survivor. Thousands of others haven't."

Mack added that changes need to be made to the system if the officers do not face any criminal consequences.

"This isn't a black or blue issue," Mack said. "This is a right or wrong issue. And what happened is not right."

Dale declined to go on camera after the conference but did tell WTOL that he was distraught by the decision and fearful that the two officers could be back on the streets soon.

RELATED: Expert talks use of force in Oregon police shooting 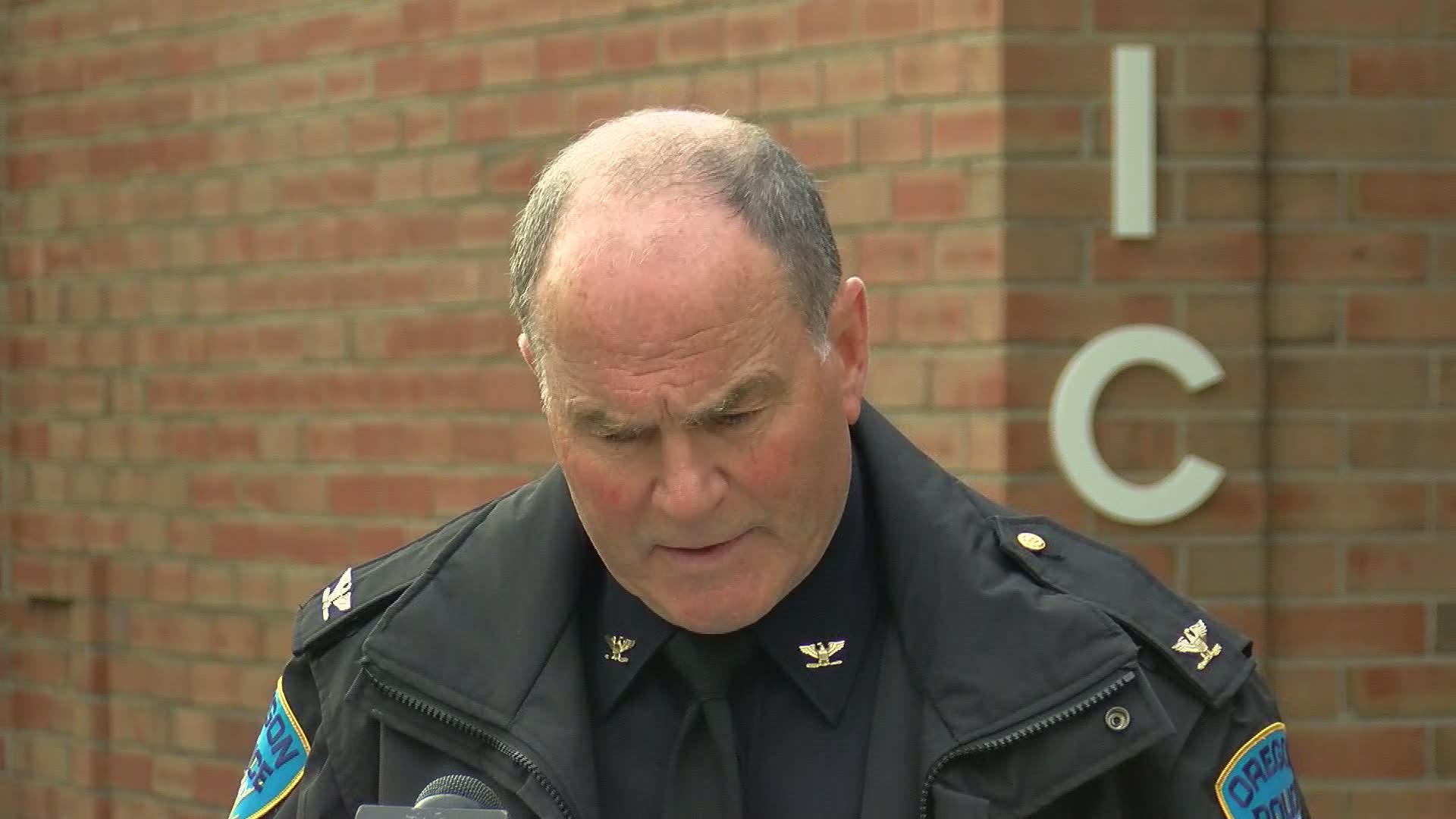