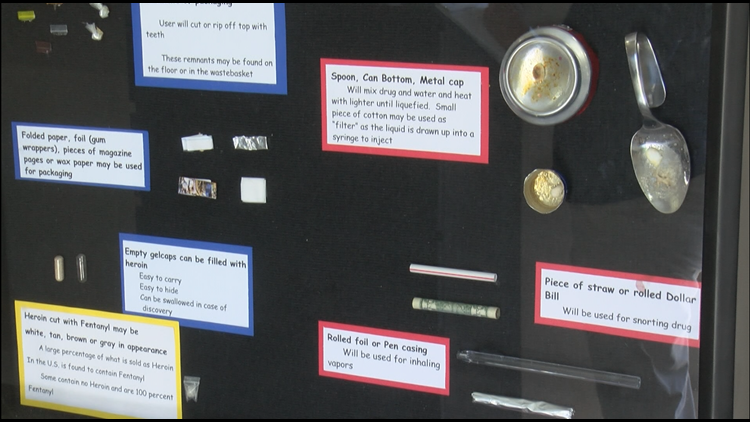 Catching the signs early can be vital.

“My kids can each name at least two kids that aren’t here that we’ve lost to opioid addiction, and I try and tell parents, you know you can’t deny that it’s all over this country," Joseph Abdalla, executive director for Code 3 said.

CODE 3 is a company that includes multiple organizations from across the country, all of which are focused on searching for ways to end the opioid crisis. They led the charge for Tuesday’s demonstration.

Set up as a mock teenage bedroom, the trailer exhibit brought in by Code 3 and the Rx Abuse Leadership Initiative of Ohio, or RALI, educated families about the possible warning signs of substance abuse.

“The parents come in and tell us they didn’t see any signs, they didn’t know their son or daughter was using heroin, and then we look around the house and we see signs all over the place. So, we’re trying to get the information we have as police officers out to the parents who need it. By the time they call us as law enforcement, it’s either one: there’s been an overdose, two: there’s been a death or three: they’re so far wrapped up in the addiction, that parents don’t know which other way to turn,” retired police officer Kevin Barrows said.

For parents like Bianca Rivers, who had her two little girls with her as she toured the trailer on Monday, the idea of having them use drugs without her even knowing it was terrifying.

“I learned that, like, you can hide anything anywhere," Rivers said.

The number one takeaway: if you suspect your child is using drugs, take action.

Looking through their belongings may seem like snooping, but a simple check of their pockets or backpack after they fall asleep at night may save their life without them having to feel like you’re violating their valuable personal space.

As a reminder, the next National Drug Takeback Day, where you can turn in any unused, unwanted or expired prescription drugs without question to keep them from being improperly consumed, is Saturday, April 27.