George Floyd mural in north Toledo reduced to rubble after being struck by lightning; mayor and artist say it will be replaced

The piece was created by Toledo artist David Ross. The building was said to be stable and secure prior to the lightning strike, however, the facade was not. 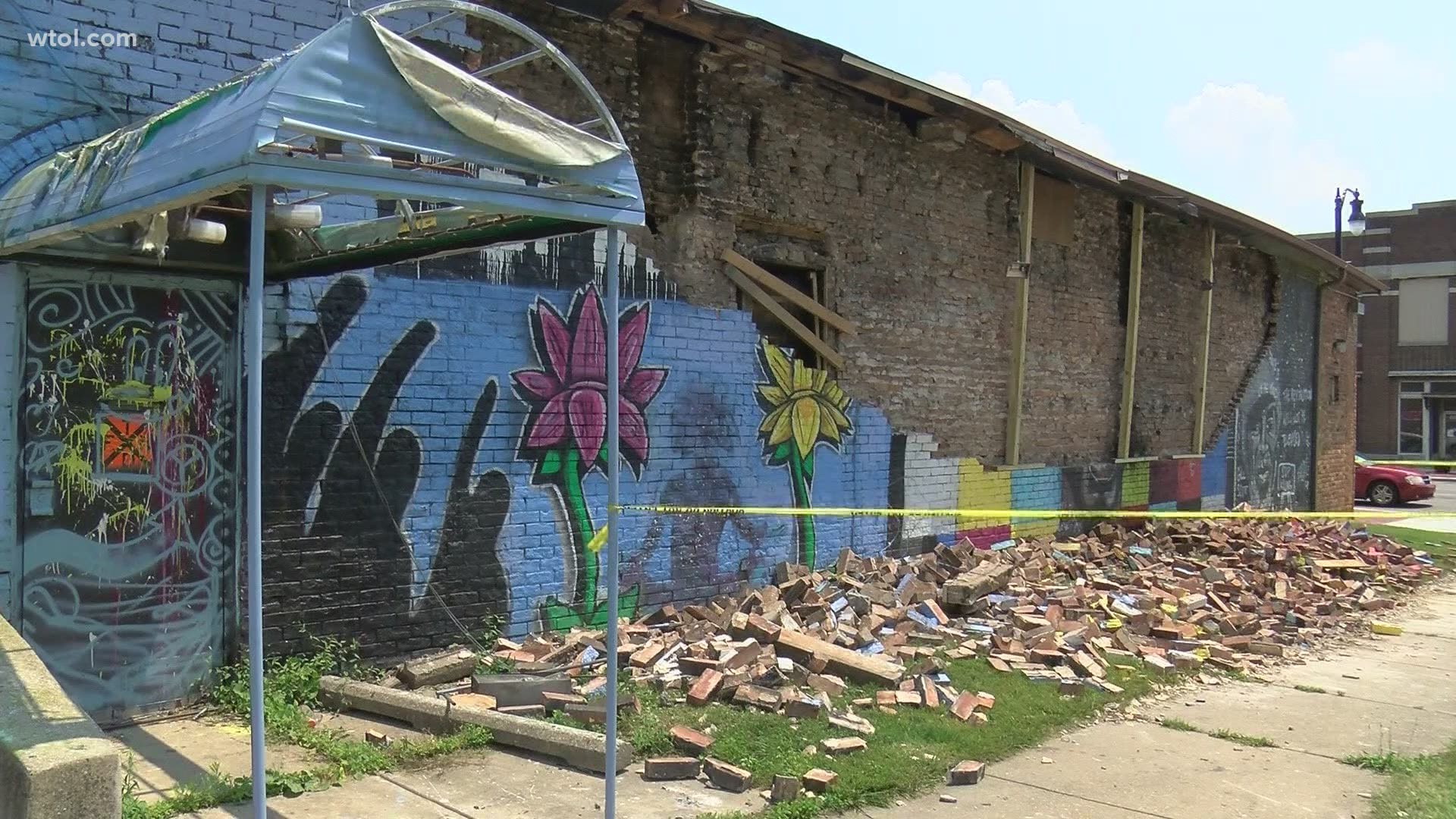 TOLEDO, Ohio — A north Toledo mural has been reduced to rubble after it was reportedly struck by lightning Tuesday and painted bricks still littered the area late Wednesday afternoon.

Toledo Fire and Rescue responded to the scene at Summit and Lagrange Streets, where a large mural dedicated to George Floyd —  who was killed by Minneapolis police officer Derek Chauvin last year — had collapsed.

The piece was created by Toledo artist David Ross just about one year ago. He said the artwork stands as a memorial and reminder to never forget what happened that day in May of 2020.

A witness who saw the wall fall told TFRD they had seen a lightning bolt strike the building. The department later confirmed the strike to be the cause of the collapse.

No cleanup effort was under way yet on Wednesday. One of the things the city is looking at is whether this building needs to be demolished entirely following the lightning strike. A spokesperson for the city said building officials have determined that an emergency demolition of the building is not necessary at this time.

The spokesperson said the building was stable and secure prior to the lightning strike, however, the facade was not.

The city is contacting the property owner and making sure the building's safe and not an eyesore. The rest of the mural that's still standing will probably have to come down.

According to the WTOL 11 First Alert Doppler radar, a confirmed "negatively" charged lightning strike hit the corner of Summit and Lagrange streets sometime between 4:30 p.m. and 4:32 p.m.

Credit: WTOL 11
First Alert Doppler radar showed a lightning strike between 4:30-4:32 p.m. on July 13 in the area of the George Floyd mural on Summit and Lagrange streets in north Toledo.

"What we do know is that the mural will be replaced,” Toledo Mayor Wade Kapszukiewicz said on Wednesday. “We will work with the Arts Commission and the artist to make sure that a new mural can replace the old, so that the message at the core of this artwork can be heard.”

When reached Wednesday, artist Ross said he definitely plans on redoing the mural somewhere and it will be again center around George Floyd. He said he'll incorporate a double rainbow into the new mural because the same day of the lightning strike, he saw a double rainbow. Ross said he wants to put the new mural somewhere where everyone will appreciate it.