After a 2018 mass shooting in Pittsburgh, Toledo's mayor came up with a plan to hold gun dealers accountable. But no company has met the city's standards. 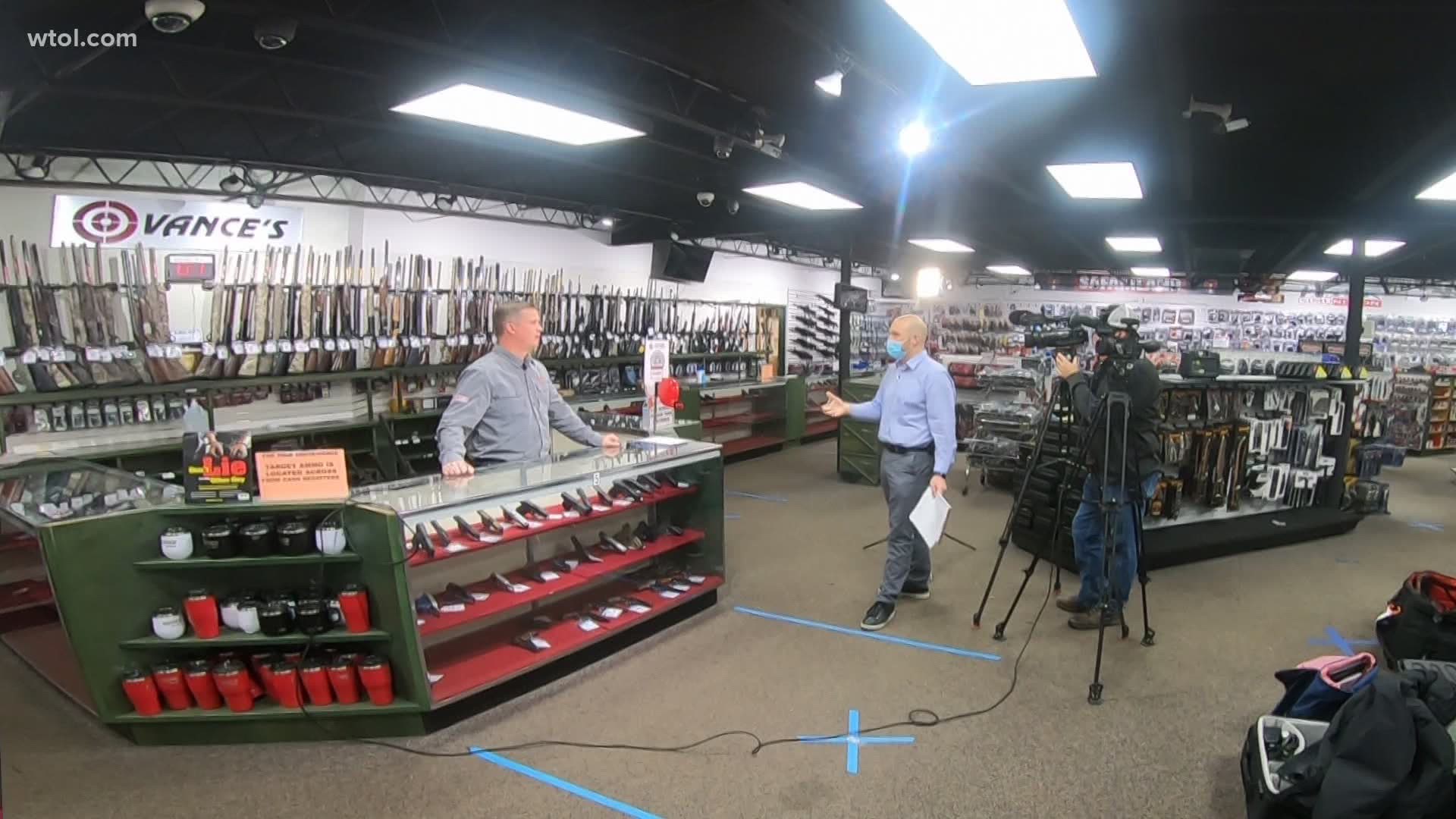 TOLEDO, Ohio — It has been about two years since a gunman slaughtered 11 people inside a Jewish synagogue in Pittsburgh.

The mass shooting, like most do, evoked thoughts and prayers across the globe.

But here at home, Toledo's mayor said that wasn't enough. He promised action.

The results, two years later? Judge for yourself.

"It's something nobody ever expects to happen. They feel they're safe there," said Toby Hoover, founder of the Ohio Coalition Against Gun Violence. "And then everybody said, 'Well maybe we're not.'"

Some 235 miles away, Toledo mayor Wade Kapszukiewicz said he had seen enough.

At a press conference on Oct. 30, 2018, Kapszukiewicz said, "I am to the point where I am done. I'm done with the thoughts and prayers, tweets and the vacuous bromides coming from politicians, and the endless cycle of memorials and vigils."

In an interview with 11 Investigates on Oct. 27, 2020 -- nearly two years later -- Kapszukiewicz recalled his emotions on the day of the shooting as "anger, outrage, and more than anything else, just a feeling of disappointment that we can't solve this problem."

'All of our options currently don't meet our standards'

So with the limited mayoral power he has, Kapszukiewicz promised to take action. He devised a list of six questions that would be sent to each weapons and ammunition dealer with whom Toledo's police department did business.

The goal was to weed out bad suppliers and make sure Toledo was only purchasing from responsible companies.

Doug Vance is the vice president of Vance Outdoors, the city of Toledo's primary weapons supplier.

When asked if they were fair questions to be asking of every dealer that the city of Toledo deals with, Vance said, "Sure, I mean, I think they're fair. Obviously I'm guessing that the mayor is looking to make sure that they're dealing with reputable dealers or distributors and people who have the same mindset of, 'We don't want to get firearms of any kind -- handguns or rifles or shotguns -- into the hands of people who should not have them.'"

From 2018 to 2020, records obtained by 11 Investigates revealed Toledo dished out nearly $150,000 in taxpayer dollars to Vance Outdoors, despite a peculiar answer to one of the mayor's new questions.

The question reads, "Do you sell assault weapons for civilian use?"

Vance's answer: "Assault weapon" is not a specific term, but yes, the company sells to civilians.

11 Investigates asked Vance if he worried that answer could disqualify the company from doing business with the city of Toledo.

"I mean, certainly anything's possible," he said. "I'm not the one in control of it so I don't know what he was utilizing as a standard. Obviously, most anyone that they're going to deal with that sells firearms is either somebody who manufactures or sells, in some capacity, to someone that would have civilian status."

Vance did not tell 11 Investigates how many agencies his law-enforcement company does business with across the country but estimated it was well over 1,000.

It turns out Vance had nothing to worry about with Toledo. The city spent thousands of dollars with his company after receiving the answers, begging the question: Is there any disqualifying response?

"I think there is a correct answer and we are trying to create a world where more companies give that answer," Kapszukiewicz said. "I guess that would be my counter."

"But Vance says that they do sell to civilians," 11 Investigates replied.

"Well, then we should not want to give our business to them," Kapszukiewicz said. "And you are going to say, 'But we do.' And I'm going to say, 'Yes, but we have to because there are no companies that meet our standard.'"

The standard, Kapszukiewicz admitted, was ambitious from the get-go. But he claims it was designed to be a long-term project. Longer than two years.

"We do have to purchase the weapons for our police department from companies that we don't believe are responsible," Kapszukiewicz said. "We have to do it. We have no other choice. We're certainly not going to allow our police officers to go out there without the tools they need to succeed. We know we don't have any alternatives right now. What we're trying to do is create alternatives."

It's difficult to measure the success of this directive because Toledo's buying habits haven't changed. But the mayor points to two positive developments.

What else can be done?

"I'm certainly one who would be open to any suggestions made in good faith to improve our questionnaire, and if there are some ways that we can improve the language to strengthen it, I'm open to that," Kapszukiewicz said.

When we asked Kapszukiewicz when we would see tangible results from his directive, he was noncommittal on a time frame. But he admitted the coronavirus pandemic has delayed the progress he had hoped to see.

RELATED: Toledo mayor, police chief says the city will only buy weapons, ammunition from “responsible” companies in the wake of the country’s latest mass shooting