11 Investigates: What will happen to Baby Doe?

Found decomposing in a car in 2017, the body of a 2-month-old baby remains in the Lucas County morgue. The fate of the body of the baby boy is a subject of debate. 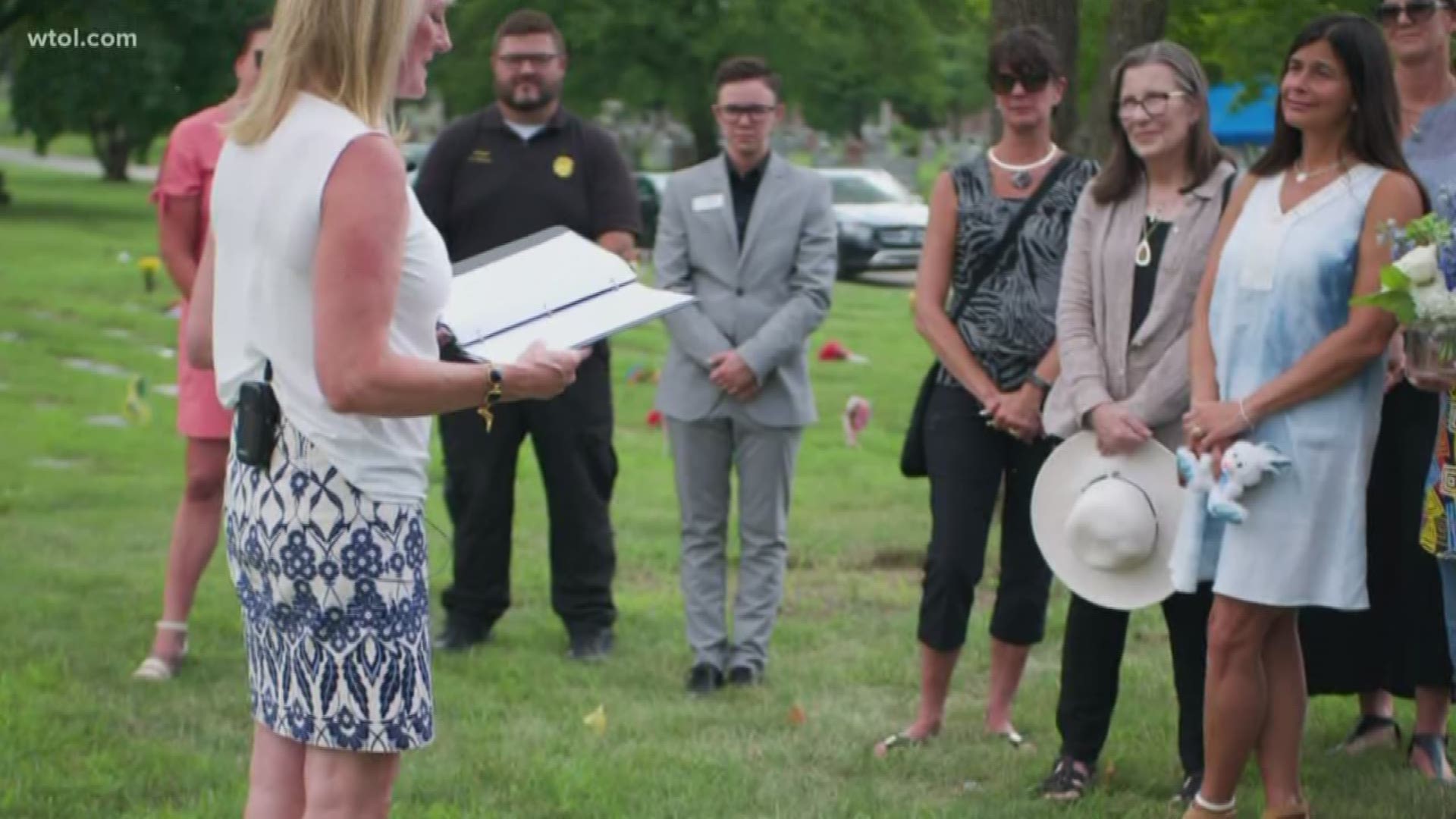 The 2-month-old baby had been in left in that car in the 2400 block of Vaness Drive off Bancroft.

"How did that baby come to be in that car in that day? How long was it there, who put it there, how did it come to be there?” Bates said.

"I don't think the citizens of Lucas County realize this child is actually still frozen in the morgue and when they find this out, I think they're going to be appalled."

Abandoned as a baby herself, Monica Kelsey has some strong opinions on what needs to happen for Baby Doe. Kelsey is the founder of Safe Haven Baby Boxes.

"This little guy needs to be buried. He needs to have a proper burial and laid to rest," Kelsey said.

One nonprofit group wants to know why the baby - who was left cold and alone – is still cold and alone. This child's body is still sitting frozen at the morgue over two years later.

Linda Znachko, founder of the Indianapolis-based nonprofit called He Knows Your Name, wants to give the baby a proper burial.

“I don't ever want a baby to be left in a morgue unnamed, and their life not celebrated. I just find that really sad," Znachko said.

Credit: He Knows Your Name
He Knows Your Name ministry, founded by Linda Znachko (left), has "adopted" 20 deceased abandoned babies from four different states. She's given them names and laid them to rest. She dresses them in a gown, wrapping in a blanket, and provides a funeral service.

Znachko's nonprofit has essentially "adopted" 20 deceased abandoned babies from four different states. She's given them names and laid them to rest. She dresses them in a gown, wraps them in a blanket, and provides a funeral service.

"I've been tracking this story for two years and I just have this baby in my heart and I will not rest until this baby is named. I just find that Baby Doe is absolutely unacceptable to me," she said.

Lucas County Coroner Dr. Diane Scala-Barnett would not go on camera, but said she will not allow Znachko to name and bury Baby Doe at this point.
Ohio Revised Code 313.08 gives time limits on collecting evidence from an unidentified body, but doesn't give a time limit on the coroner's right to custody of the body.

“The fact that we have allowed one person to make a decision on someone’s life - essentially where he's going to be laid (to rest) - we need to have something on the books stating how long this little guy can be there,” Kelsey said. “Because obviously the coroner is going to leave this baby there as long as she seems fit.”

Dr. Barnett said her office did collect DNA evidence from Baby Doe, but is concerned about its viability since the baby was found so badly decomposed and the investigation hasn't revealed anyone to compare that DNA to yet.

11 Investigates did speak with an investigator on the case, Detective Sgt. Roy Kennedy, who said - contrary to what the coroner said - that Baby Doe's DNA has been used for comparison. In fact, he said it was used to rule out the family that lives in the home outside of which was parked the car that contained Baby Doe.

We also reached out to the Ohio Attorney General's Office, which will not comment on an open investigation.

“I say that's a load of crap. If they need more evidence from this body, then take it," Kelsey said. "But leaving this baby frozen in the morgue should be appalling to the citizens of Lucas County.”

"Keeping the baby at the morgue maybe isn't the best thing, but it's better than maybe the alternative," Prosecutor Bates said.

The alternative to which the prosecutor refers is burying the body and then having to exhume the body.

"We've had to exhume bodies before, and that is really really unpleasant task," Bates said.

Znachko said that the issue of decomposition is not unlike many other cases she’s had where a coroner still allowed the body to be buried. In fact, Znachko said over two years is the longest she's ever had to wait to lay an abandoned baby to rest.

She said she respects Dr. Barnett's process, but doesn't agree. Znachko thinks recognizing the death in a funeral service could even breathe new life into the cold investigation.

“It's very interesting to me when I have done funerals and communities and neighborhoods of people come forward to participate in the service," she said. “When this baby was found, everyone in Lucas County knows that this child was disrespected by his mother. And now this child is getting no respect from the coroner (by not) allowing this child to be buried.”

Prosecutor Bates said she is getting her own investigators to take a second look at the homicide investigation.

“You've brought it to my attention and I appreciate that and we're going to do everything we can to get some answers in the next few months,” she said.

Znachko questions the expediency of the process, though.

“I just feel like there's got to be a time period where they feel like they've waited long enough,” Znachko said.

She also said if and when she is able to "adopt" Baby Doe, the infant will be buried in this county, at her expense, and the coroner's office will know right where he is.

She said she wants the child to be no longer cold and alone. He'll be given a warm funeral service, wrapped in a blanket and he'll have a name.

Kelsey said, “This little guy was 2 months old. He had life. Let's celebrate those two months that he was here."