11 Investigates: An ethics report cleared the Maumee mayor’s administration, but added fuel to an ongoing firestorm

Last summer, a typically mundane wage study report from The Employer’s Association ignited a political firestorm in Maumee. It’s a storm that shows no sign of abating and a storm that threatens to sweep up the city’s administrator in its wake. 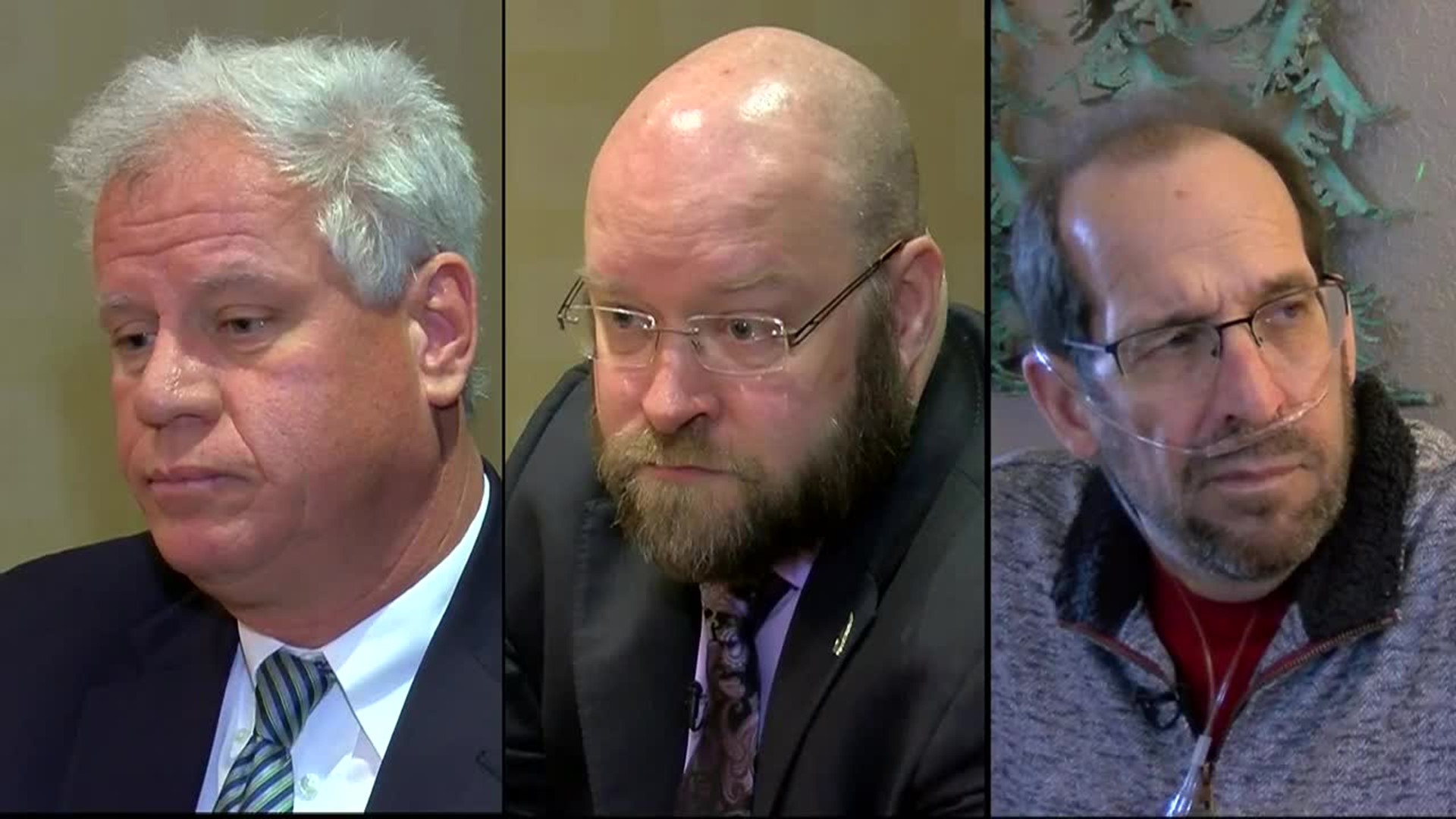 MAUMEE (WTOL) - Last summer, a typically mundane wage study report from The Employer’s Association ignited a political firestorm in Maumee. It’s a storm that shows no sign of abating and a storm that threatens to sweep up the city’s administrator in its wake.

On Monday night, Mayor Richard Carr is expected to recommend to council that City Administrator John Jezak be fired.

At the heart of the issue is the consultant’s wage study that turned into the centerpiece of an ethics investigation led by law firm Squire Patton Boggs that was released by the city in December. Multiple whistleblowers raised several concerns related to actions by the Carr administration. The firm found no clear violations of ethics law, but that has done little to end the questions. Carr believes Jezak, himself, is the one acting unethically and dishonestly.

What’s next? Maumee City Council meets Monday at 7:30 p.m. WTOL will be there and bring you all the latest developments.

On Dec. 31, Maumee Mayor Richard Carr informed City Administrator John Jezak that since Jezak serves “at the pleasure of the Mayor and Council,” as per the city charter, he plans to recommend Jezak’s employment with the city be terminated. Carr said the termination would be recommended to council at the first regular meeting in January. Council meets Monday at 7:30 p.m. We’ll be following developments during the meeting and will bring you the results during broadcast and Facebook Live that evening.

A WTOL investigation focused on what many people believe to be the most serious concern in the ethics investigation report – that Mayor Carr has inexplicably sparked the meteoric rise of longtime city employee Susan Noble, who is now the city’s human resources commissioner and one of the highest-paid employees in Maumee.

Because of that Employer’s Association study, Noble is on track to make more than $110,000. Most concerning to Jezak and some councilmen is that the study was conducted by Bob Bethel, a longtime friend of the Noble family -- a relationship that Carr did not reveal to council.

“She was an administrative assistant, a longtime clerical employee from beginning to end, prior to becoming HR commissioner,” Jezak says of Noble. “Not to say she was a bad employee, but her skill set is not what is required of her current position as commissioner of HR.”

Noble did not respond to multiple requests for comment.

Maumee Mayor Richard Carr said that Human Resources Commissioner Susan Noble, whom he recommended for pay increases, helped the city slash its bill for worker’s compensation attorneys to almost nothing, and she also created an employee handbook.

Carr named Noble the interim human resources commissioner in 2012, in the hours after he was elevated to mayor when Tim Wagener was forced out following an ethics investigation and immediately after Finance Director Linda Wilker was fired for what Carr said was her inability to work with council -- a notion disputed by several current and former Maumee employees to WTOL.

One former city employee, who asked not to be identified, said Noble had no obvious qualifications to be HR commissioner and remembered her as “a social butterfly” who would often “make mistakes because she was off playing social director.” Noble is now on the same pay level as the police and fire chiefs and prosecutor, each of whom has an advanced degree and supervises employees. Noble has a high school degree and no supervisory obligations.

Carr says there is no mystery to his backing of Noble. He had to put someone in the position when he took office, she was picked on an interim because of her experience with worker’s compensation, council repeatedly approved her promotions, and her most recent promotion was needed to put her on the same level as other male commissioners. He also says Noble helped the city slash its bill for worker’s compensation attorneys to almost nothing, and she also created an employee handbook.

But there have been missteps. In 2013, records show, Noble allowed the city’s worker’s compensation insurance to lapse. Last year, she ordered the wrong testing material for police officers looking to be promoted, a mistake that Carr says was not hers, but rather was the fault of the site from which she ordered the material.

But Noble’s critics say that is part of the problem -- that Carr always defends her and that he hand-picked her despite her not distinguishing herself professionally for 15 years before he came to office.

Carr told WTOL that he did not really know Noble personally prior to appointing her on an interim basis in 2012. But that characterization was strongly disputed by two longtime employees who did not want to be named for fear of incurring Carr’s wrath. They said Noble has been a close friend of Carr’s longtime paralegal Judith Kwiatkowski since the early 2000s and that Noble frequently attended council meetings when Carr was president, making it extremely unlikely that Carr did not know her well.

11 Investigates: An ethics report cleared the Maumee mayor’s administration, but added fuel to an ongoing firestorm

“It’s clear it was a long-term manipulation of council to enrich an employee who, for reasons we still do not know, Mayor Carr had an affinity for and for no real reason,” councilman David Kissinger said.

When Noble was promoted from administrative assistant to interim human resources commissioner in 2012, her annual salary climbed from $52,657 to $60,000. When she was made the permanent commissioner in 2013, her salary rose to $67,041 and to more than $70,000 the following year.

In 2015, Carr pushed for her to be elevated to Range 5 of the managerial classification. Some of the other directors balked because Noble did not supervise anyone, and the motion was voted down by council. On Jan. 5, 2016, Carr sent out an angry email to directors, saying he was disappointed in the opposition and what he said was misinformation, and he said there would be no raises for directors in 2016 as a result.

In late 2016, the administration sought bids for a consultant to study the managerial wage levels. An initial bid was rejected, but then Noble recommended The Employer’s Association – and friend Bethel. The bid was sent by Bethel to Noble. The city accepted the $2,500 contract. The handling of that contract, Jezak says, was unusual because of the fact that it was handled almost exclusively by Carr, Noble, and Finance Director Deb Cartledge.

Bethel recommended that Noble’s salary eventually be capped out at more than $110,000.

When asked by WTOL if he knew of the personal relationship between Noble and Bethel, Carr grew agitated and initially said he did not.

But hours before, Jack Hollister, the president of The Employer’s Association, told WTOL that Bethel told Carr about the friendship prior to agreeing to conduct the study.

“I don’t recall that. I don’t know that,” Carr said in response.

But what is clear is that Carr did not tell members of the personnel committee about the information prior to their June 15, 2017, vote on Bethel’s recommendations. And days before the vote, Carr sent out an email to directors, saying that none of them was to speak before the vote, other than Cartledge – the other person who knew of the Noble and Bethel friendship. The email from Carr was criticized by Squire Patton and Boggs.

Finding out later about the email, committee chairman John Boellner was highly critical about Carr’s apparent effort to squash discussion.

“I never knew that to happen before. Usually when you go into a committee meeting, you rely on your employees to tell you what they know and how they came up with that conclusion,” he said.

More disturbing to him was that the relationship between Bethel and Noble was not disclosed to members of the committee – him, Brent Buehrer, and Kissinger. Boellner voted against the motion because he did not believe Noble should receive supervisory pay without supervising anyone. The vote passed 2-1, though Kissinger told WTOL that he would have voted against it if Carr had disclosed what he knew.

The voted elevated Noble’s salary to more than $86,000 and achieved Carr’s desire to put her on the same level as other commissioners.

“I don’t think that motion (to allow a raise) would have passed if we had knowledge of that (relationship). We found out afterwards. A councilman said, ‘Did you know?’ Then I was shown posts on her Facebook page of them vacationing together. That should have been disclosed.”

“I don’t think that motion would have passed if we had knowledge of that (relationship),” Boellner says. “We found out afterwards. A councilman said, ‘Did you know?’ Then I was shown posts on her Facebook page of them vacationing together. That should have been disclosed.”

That photo, dated a month after the promotion and with arrows pointing to Noble and Bethel, was circulated around city hall and sent to WTOL. It appears to show Noble and Bethel vacationing with a group of others.

Kissinger and Boellner say they believe that Carr was clearly trying to shape the vote of council, and they plan to ask the Ohio Ethics Commission to rule on the current case. Boellner says he believes Carr should step aside.

Buehrer, who refused to go on camera, told WTOL: “This isn’t a witch hunt. It’s a Rich hunt.”

Carr feels the same and says he’s tired of being forced to defend Noble. He reiterated that his goal in elevating her was to put her on the same pay level as other commissioners.

“They don’t like the fact she’s getting paid that much,” Carr says. “I think it’s extremely demeaning to go after this woman.”

He has focused his anger on Jezak, who he believes took the complaints to Squire Patton Boggs. He says that Jezak contracted with the firm in June and says that Jezak falsely told the firm that he already had council’s authorization for the study. That authorization did not come until August. On Monday night, Carr hopes that council will fire him.

But for Jezak, Boellner, and Kissinger, they say the mayor’s move is to cover for his actions involving Noble. They just want to know why Carr has pushed so hard for her, why she is one of the highest-paid employees in the city.