DeWine said Tuesday that if he could put forth a statewide mask mandate for schools, he would do it. But, legislation passed in March has made things tricky. 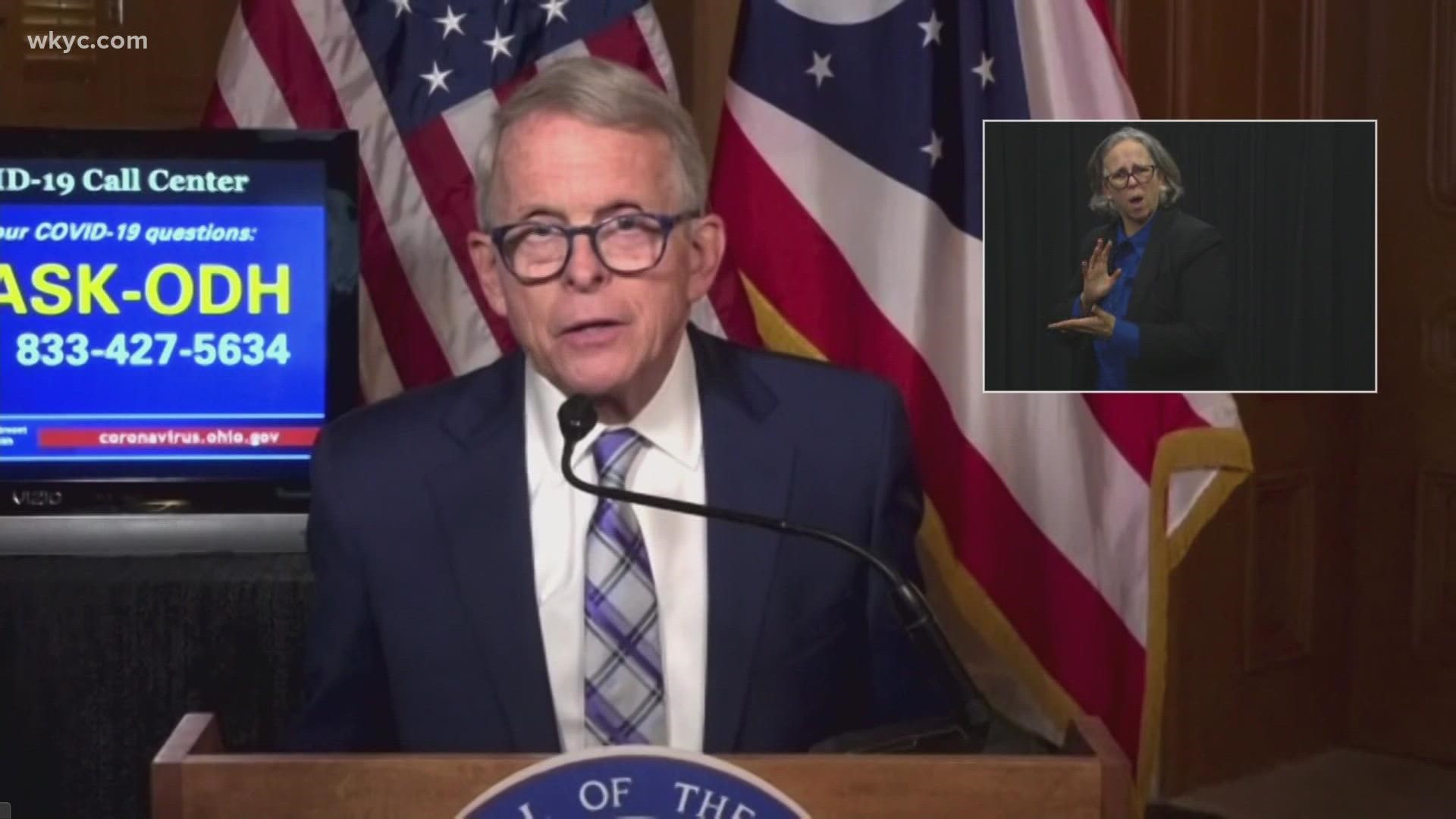 COLUMBUS, Ohio — Ohio pediatricians are pushing for mask mandates in schools, as the COVID-19 delta variant has shown to have a greater impact on children than previous strains of the virus.

Ohio Gov. Mike DeWine held a briefing Tuesday, providing insight into the trends among school-aged children in the state.

He said that COVID-19 cases are increasing at nearly twice the rate among children as compared to the rest of the population. In the last week, he said, Ohio saw a 44% increase among school-aged children and only a 17% increase among everyone else.

The 16 highest number of cases per day throughout the entire pandemic for kids between the ages of 5 and 11 in Ohio have all been in the last 19 days.

"The data is now clear that there is a higher level of COVID in school districts where masks are not required," DeWine said.

Dayton Children's Hospital President and CEO Deborah Feldman explained that the state is dealing with a disease that for the past 18 months has been perceived as something that didn't impact children in a significant way. However, with the emergence of the delta variant, she said, that belief has been shattered.

Feldman said that Dayton Children's Hospital has been on "red bed status" 55% of the time since August. On Tuesday, she said the hospital had just two beds available outside of the NICU and behavioral health units.

"The demand is absolutely creating an unsustainable pressure on our staff," Feldman said.

Even if you don't think your kid will get seriously ill, Feldman explained that when access points are this busy, it prevents staff from addressing other needs that come in, like asthma attacks, concussions and other injuries.

Because of the increasingly long wait times, she said that some parents will simply give up and leave.

Feldman said the reason for the surge is multi-faceted: hospitals statewide are seeing very high levels of respiratory illnesses like RSV, an increase in behavioral health visits, and all of this happened as kids went back to school, many unmasked.

Toledo is not immune to these problems, either.

ProMedica Vice President of Patient Care Services Paula Grieb said that over the last four weeks, there has been a steady increase of kids testing positive for COVID-19 in northwest Ohio. Currently, the positivity rate among pediatric patients in the area is at 12.7%. Two weeks ago, it sat at just over 8%.

In Lucas County Monday night, all emergency departments went on EMS bypass at the same time, including the children's hospital. When one hospital goes on bypass, EMS transports patients to the next closest hospital. However, if all county hospitals go on bypass, they are all forced to resume taking EMS traffic. This means that a patient may not go to the closest hospital to them or the one best suited to their needs - they simply go to the hospital next in the queue.

This lasted for eight hours. By Tuesday afternoon, most Lucas County hospitals were once again accepting EMS patients. However, as of 4 p.m., the University of Toledo Medical Center was still on bypass.

"It's more than a bit frightening," she said.

To alleviate pressures, both Grieb and Feldman asked for help from schools and communities. Those who are able to get a vaccine should do so, they said, and in order to protect those who cannot get the shot, everyone in school should be masked.

DeWine said he fully supported a mask mandate in schools, however, due to legislation passed by the General Assembly in March, he said he no longer has the power to do so himself.

"If I could put on a statewide mandate (for schools), if the health department could do it, we would do it," DeWine said.

He noted that the state legislature has made clear if he were to put on a mask mandate for children in schools, it would swiftly be removed.

"If there is a change in the legislature, I would be glad to put this order on," DeWine said.

Another option could soon be on the table for parents to protect their kids from the virus, however.

Children from ages 5 to 11 years old could be eligible for the coronavirus vaccine by Halloween. Former FDA Commissioner Scott Gottlieb said Pfizer may file for emergency approval with the FDA this month.

Currently, only those 12 and older are able to get vaccinated against COVID-19.

Pfizer representatives said the pharmaceutical company has been conducting two-shot vaccine trials on kids 2 and older but for now, it will only seek emergency approval for kids ages 5 to 11.

Clinical trials are still underway, according to the FDA, but once the relevant portion is complete, the agency will work with manufacturers to analyze the data. Then, it can be submitted for emergency use authorization. After that, the FDA will consider the benefits and risks, which could take only a few weeks.

While the kids vaccine is the same as the adult shot, the dose would be lower. The FDA has made it clear parents need to wait for the formal authorization.

Vaccination overall in Ohio has slowed among those eligible.

According to the Ohio Capital Journal, in 66 of Ohio’s 88 counties, fewer than 1 in 2 residents have received at least one dose of the COVID-19 vaccine.

The vaccines are free and have been widely available to the general public since late March.

The decline in vaccination comes as cases rise.

On Tuesday, 7,325 new cases were reported, with a seven-day average testing positivity rate of 12.6% — the highest since mid-January and more than double the CDC's recommended threshold of 5%.