While they're not doctors or scientists, these Northeast Ohio men are helping to fight the coronavirus. 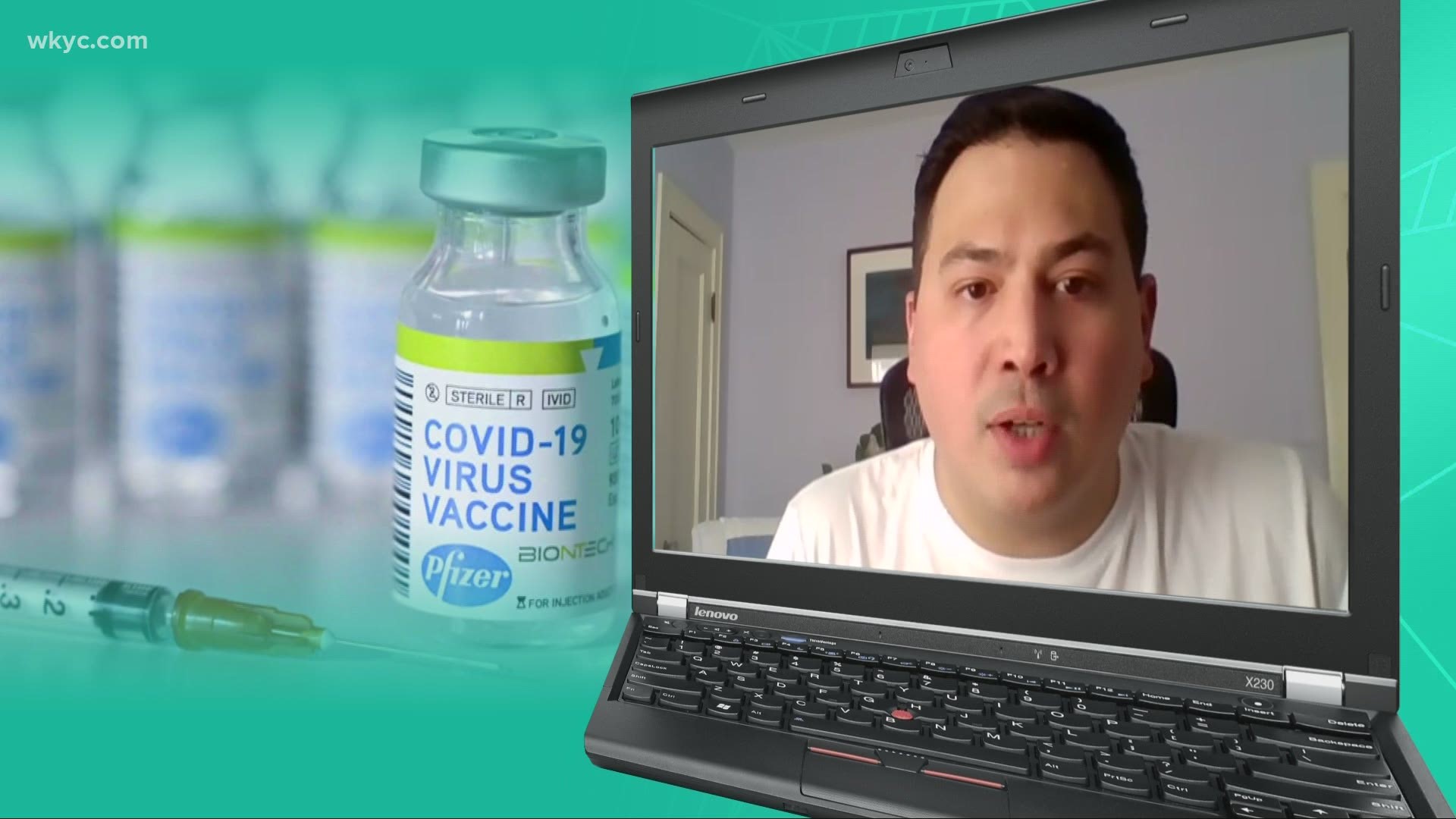 SHAKER HEIGHTS, Ohio — Two Shaker Heights men are among the first Ohioans to be vaccinated against COVID-19, at least potentially.

One of them is taking part in the Pfizer vaccine trial, the other in the Novavax trial. In a 3News Exclusive, they share their journeys with investigator Rachel Polansky.

Working from home, and feeling somewhat helpless, Bryan Munch decided to do something.

"I've got two kids and I feel like this was a chance to show them how important the scientific process was," he said. "I don't know if I'll have this opportunity again, so it was a chance to put my money where my mouth was, so to speak,"

While Munch is not a doctor or a scientist, he is helping to fight the coronavirus.

"I got the first injection back in August," he said.

Munch is one of about 1,500 volunteers participating in a vaccine trial by biotech company Novavax, which is testing phase two of its vaccine in Northeast Ohio, among other places. While Munch doesn't know whether he received an actual vaccine or a placebo, roughly 80% of Novavax trial participants got the real thing, which means there's a high probability he did.

"They have you download this app, and then you say if you're feeling any muscle soreness, fatigue, dizziness, headache, muscle soreness, or redness," he explained. "And every single time I'm hitting 'no, no, no,' which surprised me. Like, I thought I'd feel something, some swelling, but it was absolutely nothing to note, which was really encouraging."

Meanwhile, Pfizer is leading the pack in the race for a COVID-19 vaccine after it was found to be more than 90% effective in preventing the virus among its trial participants.

"It was two injections, three weeks apart," Andy Geronimo, who is one of those Pfizer participants, said. "I got the first one mid-August. They swabbed me and they gave me an injection, then I came back three weeks later to get the second dose."

Like Munch, Geronimo doesn't know whether he received an actual vaccine or a placebo. Unlike Munch, he did experience some symptoms after his second injection.

"I started feeling really crummy," he admitted. "I had chills; I had to go to sleep early. I never registered a fever, but it was definitely that feeling when you start getting sick."

Because of his symptoms after the second injection, Geronimo believes he did get the actual vaccine, and not a placebo. Either way, he says he felt fine the next day and has felt fine ever since, and is sharing his story to continue building public confidence in the COVID-19 vaccine.

"I'm seeing articles about doubt, people thinking the process was rushed, and certainly in the environment where the coronavirus and vaccine development has been politicized, I wanted to take some of that out of it and show my family and friends that they know someone who received the test vaccine," Geronimo said. "I think that goes a long way to combating these ideas that it was rushed or not scientifically appropriate."

Munch says he’s sharing his story for the same reason.

"I'm starting to read about alarming responses to what potentially could be symptoms from the vaccine, but all I can tell is my version of it, which is I had absolutely no response," he said.

Pfizer and Moderna's coronavirus vaccines are both expected to arrive in Ohio later this month. While Novavax lags behind, experts say don't rule it out just yet. The company expects to report results from its trial in early 2021.