When it comes to officer-issued tasers, the ones used by the Oregon Police Division are distinctive. 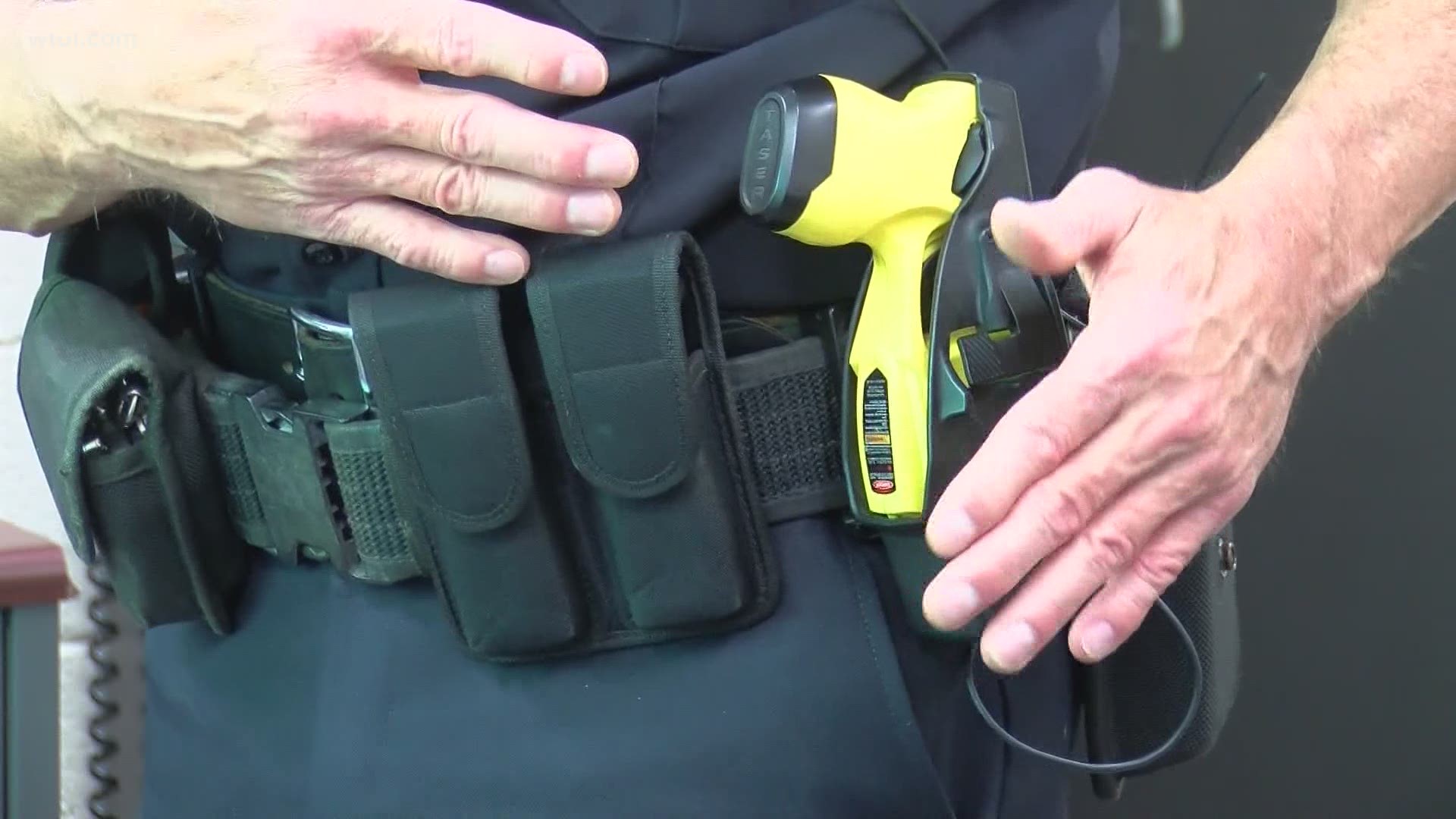 OREGON, Ohio — A suburban Minneapolis police officer who fatally shot a Black man during a weekend traffic stop in Minneapolis has resigned, and so has the chief of police.

Brooklyn Center Police Chief Tim Gannon said the officer — later identified as Kim Potter, a 26-year veteran — had made a mistake in firing her gun at 20-year-old Daunte Wright, who later died.

Although rare, a string of similar incidents has happened in recent years across the U.S.

When it comes to officer-issued tasers, the ones used by Oregon police are distinctive. They're yellow and have a shorter handle. They're also about half the weight of a firearm.

"While we don't mandate the officer place the taser and/or firearm in a specific place, we do recommend that they be on opposite sides of the duty belt so the officer doesn't get confused," Bliss said.

Some of the division's officers even wear their taser on their vest, but once they choose a spot, they can't change it from one spot to another.

Bliss' officers go through a rigorous firearm and taser training program that helps officers avoid tragic mistakes. Officers are initially exposed to about 24 hours of training and then generally receive 16 to 40 hours each year throughout their career.

"The more repetitions you can get, the better the muscle memory you develop," Bliss said. "You get used to deploying the right one in stressful situations."

Oregon police officers are trained to deploy the taser at a person's legs, mid-torso and lower body. Additionally, officers have to yell "taser" three times every time they intend to deploy to alert other officers in the area.

Bliss explained that when an officer arrives on the scene, they have to be able to accurately access what level of force is necessary. An officer must assess the situation based on several factors including the threat the individual they're confronting poses, such as if they have a weapon or are being aggressive. They must also be able to adapt to constantly evolving situations.

HOW FREQUENTLY DOES THIS HAPPEN?

Experts agree this is a real, but very rare occurrence that probably happens less than once a year nationwide.

A 2012 article published in the monthly law journal of Americans for Effective Law Enforcement documented nine cases in which officers shot suspects with handguns when they said they meant to fire stun guns dating back to 2001.

WHY DOES IT HAPPEN?

Reasons cited include officer training, the way they carry their weapons and the pressure of dangerous, chaotic situations.

Bill Lewinski, an expert on police psychology and founder of the Force Science Institute in Mankato, Minnesota, has used the phrase “slip and capture” errors to describe the phenomenon.

Lewinski, who has testified on behalf of police, has said officers sometimes perform the direct opposite of their intended actions under stress — their actions “slip” and are “captured” by a stronger response. He notes that officers train far more often on drawing and firing their handguns than they do on their stun guns.

Other experts express skepticism about the theory.

“There’s no science behind it,” said Geoffrey Alpert, a criminology professor at the University of South Carolina and an expert on police use of force. “It’s a good theory, but we have no idea if it’s accurate.”

Alpert said a major factor in why officers mistakenly draw their firearm is that stun guns typically look and feel like a firearm. St. Paul, Minnesota Mayor Melvin Carter brought up the same point during a news conference Monday.

“Why do we even have tasers that operate and function and feel and deploy exactly like a firearm?” Carter asked. “Why can’t we have Tasers that look and feel different? That you could never mistake for deploying a firearm so that we can ensure that mistake that has happened before can never happen again?”

WHAT ARE SOME OTHER CASES?

In one of the most well-known cases, a transit officer responding to a fight at a train station in Oakland, California, killed 22-year-old Oscar Grant in 2009. The officer, Johannes Mehserle, testified at trial that, fearing Grant had a weapon, he reached for his stun gun but mistakenly pulled his .40-caliber handgun instead.

Grant was shot as he lay face down. Mehserle was convicted of involuntary manslaughter and sentenced to two years in prison. His department paid $2.8 million to Grant’s daughter and her mother.

In Tulsa, Oklahoma, a volunteer sheriff’s deputy, Robert Bates, accidentally fired his handgun when he meant to deploy his stun gun on an unarmed Black man, Eric Harris, who was being held down by other officers in 2015. Bates apologized for killing Harris but described his deadly mistake as a common problem in law enforcement, saying: “This has happened a number of times around the country... You must believe me, it can happen to anyone.”

Bates was convicted of second-degree manslaughter and sentenced to four years in prison. Tulsa County ultimately agreed to pay $6 million to Harris’ estate to settle a federal civil rights lawsuit.

In 2019, a suburban St. Louis police officer, Julia Crews, said she meant to use her stun gun but mistakenly grabbed her service revolver and shot a suspected shoplifter, Ashley Hall, who suffered serious injuries. Crews resigned and has pleaded not guilty to a pending charge of second-degree assault. The city of Ladue admitted no wrongdoing as part of a $2 million settlement with Hall.