We're looking at a warmer December that turns colder January & February. The season will favor above-average precipitation, but that will be a mix of rain and snow. 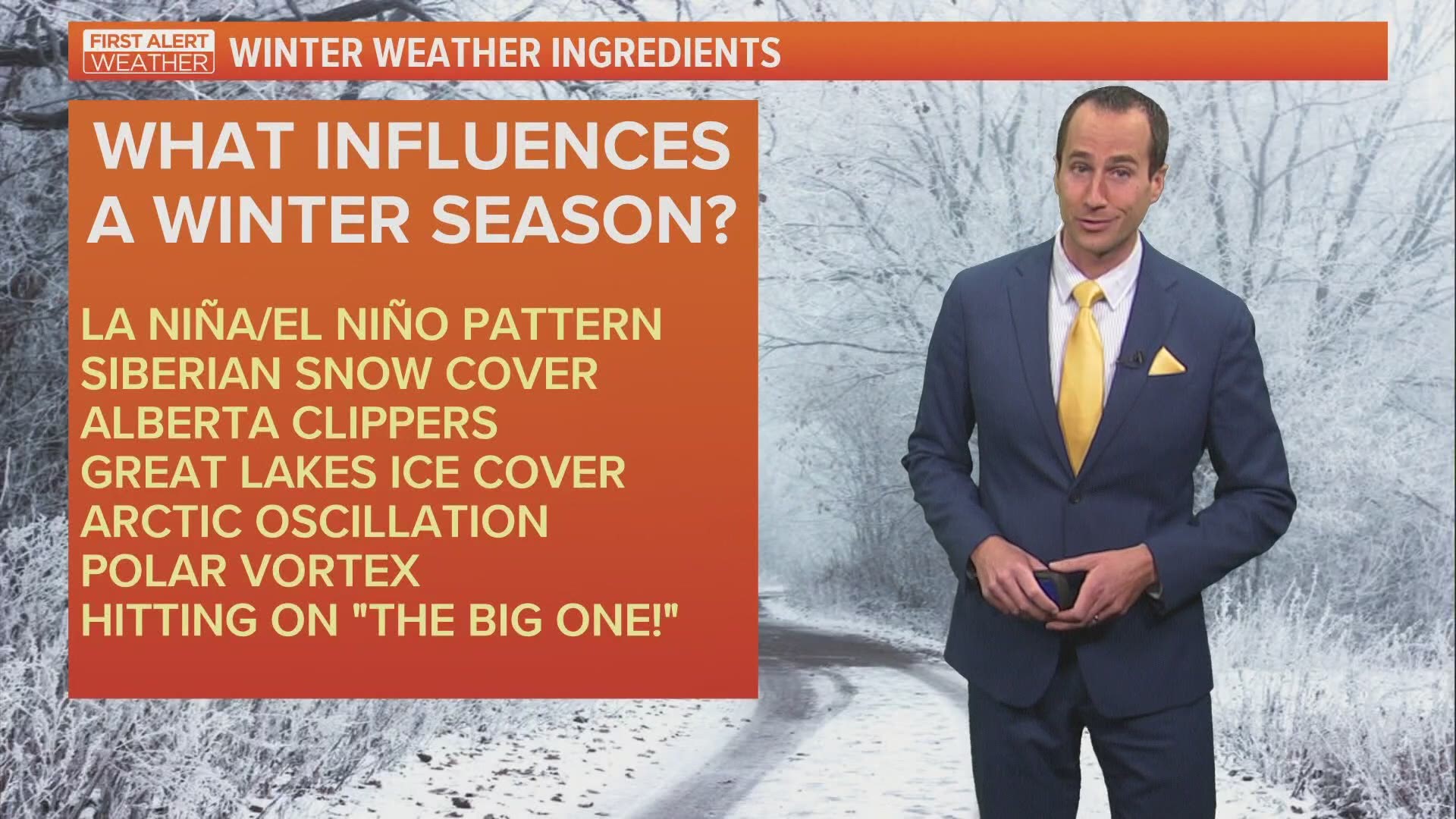 TOLEDO, Ohio — Before the sun sets in the year 2020, the beginning of winter will be yet another thing to look forward to.

The simple mention of snow stirs a lot of emotion. Some love it, and others, not so much.

A forecast for an entire winter season can be complex and challenging. It's similar to baking a cake. If you forget the butter or sugar, the cake will be a bust.

Similar to weather, you may have many of the ingredients that give clues to how this season may turn out. But if they don't all come together just right, the outcome may be quite different.

Here are several "ingredients" to a winter weather forecast:

RELATED: There's a name for the above-average weather Ohio is seeing

One of the most influential ingredients is a strong La Niña pattern this winter. This is generally a cooler than average phase of the equatorial Pacific Ocean waters that can modify and influence global atmospheric circulations and, ultimately, our jet stream.

RELATED: How La Niña will impact winter in the US

For North America, this generally causes a more persistent blocking high off the Pacific coast that directs an active polar jet steam into the northern half of the country.

This brings colder than average weather to the northern Plains. It also focuses a more active weather pattern with above-average precipitation into the Ohio River Valley and lower Great Lakes.

It's important to note: it's common that our "above-average" winter precipitation in La Niña years to be rainfall or snowfall. Typically, this is in the form of an increased frequency of heavier rain events.

Another factor is the Siberian snow cover in Asia. This is a common area that breeds some of the coldest Arctic air of the winter season. This area is above-average in early season snow cover, which means colder air masses may be larger and more common in Siberia. Favorable weather patterns can send this frigid Arctic air in our direction in what is called "cross-polar" flow.

After a warm December, look for the potential of colder air into January and February.

It wouldn't be winter without mentioning the impact of the polar vortex. Ironically, last winter and the unusually warm weather was largely due to an incredibly strong and stable polar vortex.  This is the upper atmospheric circulation over the North Pole.  When it's strong and stable, the coldest Arctic air stays in the North Pole.  When it weakens or is disrupted, the cold Arctic air spills into North America and can bring some of the coldest record-breaking cold weather into our area.  A La Niña pattern can favor more disruptions and more frequent and harsh cold weather outbreaks.

With all this said, don't look for any harsh winter weather in the near term.  The First Alert forecast is calling for a warmer than average month of December. Temperatures are likely to trend above average most of the month. This will start our winter mild and below average with snowfall in the early part of the winter season.

Our likelihood is that better colder winter weather will arrive for January and February with a more active storm track into the Ohio River Valley.  The increased frequency of storms will elevate our overall precipitation (both rain and possibly, snow) for the second half of winter. Many La Niña years feature excessively cloudy, gloomy and wet days.

Our outbreaks of colder weather may be more frequent, but shorter in duration. Part of this is due to longer-term climate signals of warmer overall winter trends in northern Ohio.

Overall, the winter season will be slow to begin (warmer than average) and even with some late season cold, it might not make up for the early season warmth. Thus, the winter will have some bouts of cold, but will likely be near average on temperature.

The entire winter season may end up above-average with precipitation, but with below-average snow in December and a greater chance of rain in certain storms, our snowfall for the entire season could be near or below average.

It only takes one! Any winter regardless of the pattern can bring one major storm that leaves a lasting memory or impression.

This pattern could favor more mixed precipitation events this winter.  This could make an ice storm or freezing rain events more common.

Either way, we will embrace and enjoy the change of season ahead. Be safe and enjoy!