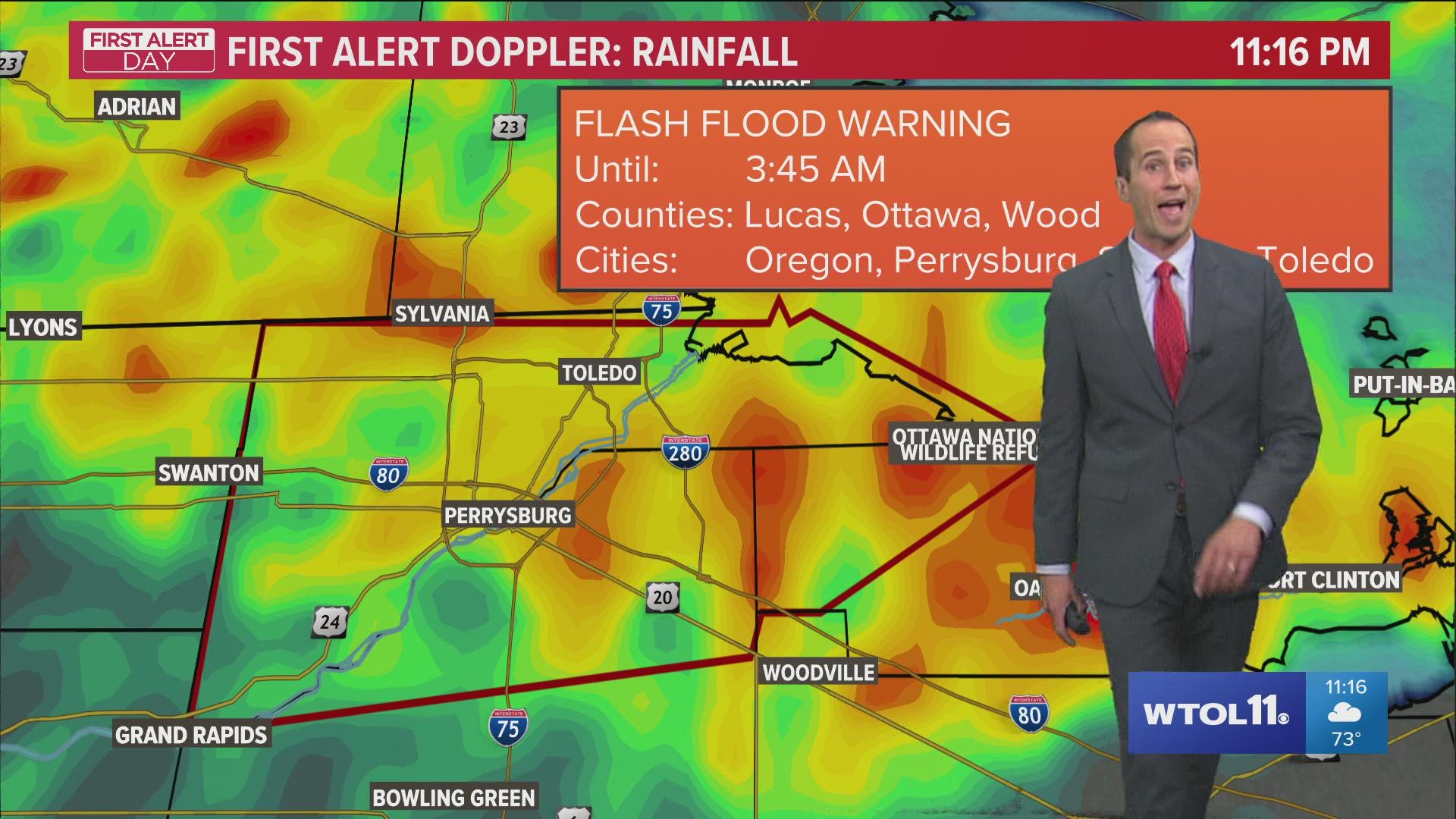 Damage reports are rolling in as strong winds topple trees and down wires.

As of Wednesday morning, power is being quickly restored to those who lost power. Stay updated on the status of your power outage on the Toledo Edison website.

There are a little more than 1,500 Toledo Edison customers without power in Lucas County, a majority of those being in Toledo. Power is expected to be restored anywhere from 9 a.m. to 6 p.m. Stay updated on the status of your power outage on the Toledo Edison website.

NEW: Our @WTOL11Toledo crews are seeing trees blocking the road on Huron St. in North Toledo. If you're heading out the door keep an eye out for debris from last nights storm! pic.twitter.com/m1WOyWyb23

The 1400 block of Huron is blocked by a tree down across the road.

Bush St. between Huron and Erie St. is also not passable due to large tree limbs laying in the street.

A FLASH FLOOD WARNING has been issued for the Toledo metro until 3:45 a.m. Rainfall of 1-3" has been reported with an additional 1" possible.

Flash Flood Warning for the Toledo Metro until 3:45 AM. Check in with @Ryan_Wichman and the full WTOL 11 morning team starting at 4:30 AM! #firstalert pic.twitter.com/8GeyDuHHU0

According to the FirstEnergy outage map as of 10:45 p.m., 22,949 people were without power throughout the state, with the vast majority of 19,931 reported in Toledo and another 1,043 in Washington Twp.

Power is estimated to be restored to most areas of Lucas County by 1:30 a.m.

80.48% of Washington Twp. FirstEnergy customers are without power.

Washington Twp. officials report a large area has had the power turned off and residents are requested to stay in their homes. Fire and police are working through the damage.

We have trees and power lines down with in the township. Edison is on site. Torgler - Hammond to President and President...

Reports of downed trees and flooded roadways across the Toledo area.

Credit: Silas Tsang/WTOL 11
A tree downed during the Sept. 14 storms at Knightsbridge and Plum Leaf, off Heatherdowns.

More than 15,000 people have lost power in Lucas County alone as a line of severe storms sweeps through the area Tuesday night.

The areas of Laskey and Jackman, the Old West End and Point Place bore the brunt of the outages.

What to know and what to expect: A live update from WTOL 11 First Alert Chief Meteorologist Chris Vickers as the storms begin to move through.