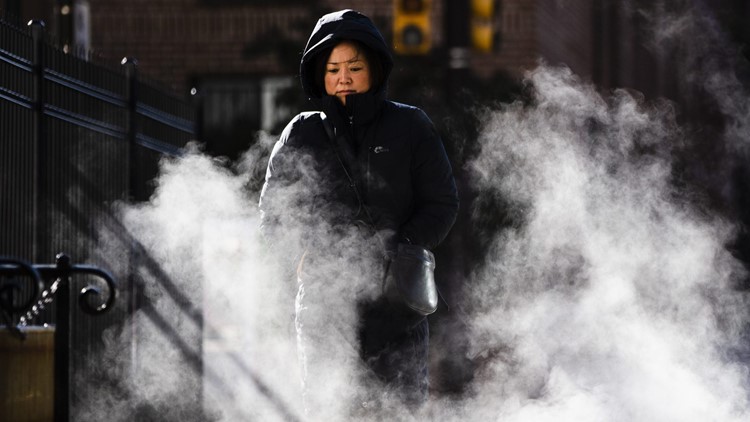 It's not quite winter, but it certainly felt that way amid ridiculously frigid conditions that gripped many spots across the country, breaking records along the way. Those hoping to escape the cold-if they're not frozen in their tracks first-may want to check out one location where summer never seems to end. Here's a look back at the week in weather news.

We're just five weeks out from the end of fall, but it's already feeling as brutally cold as the dead of winter in several locations across the United States. An Arctic blast shattered several record-low temperatures as it swept through the Midwestern and eastern portions of the country, and the South was not spared.

Residents in many cities were freezing their socks off amid lows that haven't been seen-and felt-since 1911, according to the National Weather Service (NWS). For a little historical context, the last time it was this cold in some places, the Titanic had not yet set off on its maiden voyage, and women still didn't have voting rights. This graphic shows record lows that were set on the morning of Wednesday, Nov. 13, 2019.

"On Nov. 11-12, 1911, a cold front barged across the central and eastern United States with such force that it is still remembered over a century later," the NWS wrote. "Temperature plunges that have never been recorded before or since shocked the people who were in the cold blast's path."

Among locations with new record low temperatures this week was Des Moines, Iowa, which experienced a bone-chilling minus 1 F. In Hibbig, Minnesota, a 1966 record temperature of minus 9 F was obliterated when the mercury dropped to minus 13 F on Tuesday. It was the lowest temperature in the Midwest that day.

In the southern U.S., places such as Mobile, Alabama, endured record-setting cold weather. The Baton Rouge Metropolitan Airport in Louisiana recorded a new low of 24 F, replacing the 1907 record of 26 F. In addition to the new records set across parts of the country, the NWS Mount Holly office tweeted that it observed its first snowflakes of the fall season, along with some other places in the Northeast. A woman bundled up against the cold walks on an autumn morning in Philadelphia, Wednesday, Nov. 13, 2019. An arctic blast that sent shivers across the Midwest spread to the eastern U.S. on Wednesday, with bitter weather establishing new records from Mississippi to Maine. (AP Photo/Matt Rourke)

The wintry storm system affecting the country this week did not come without its share of travel nightmares, triggering several deadly accidents and traffic-snarling pileups on Tuesday. At least six people died, according to the Associated Press (AP), and many of those crashes happened in Ohio.

One of those fatal crashes involved the driver of a semitrailer in Clark County, Ohio, who crashed into an emergency vehicle on Interstate 70. Another victim - a 21-year-old Medina, Ohio, resident - lost her life in a 16-vehicle crash on the state's Turnpike in Richfield. An astounding 85 vehicles were entangled in a pileup on Tuesday in Summit County, Ohio, amid whiteout conditions, according to News 5 Cleveland.

Over in New York, a bus driver in Preble lost control on a snowy road, crashing the bus onto its side in the median early Tuesday. Seven passengers were on board, but they were not seriously hurt, the AP reported.

A terrifying moment unfolded Monday morning when a plane slid off a snowy runway at Chicago O'Hare International Airport.

The Chicago Fire Department responded to the scene, which involved 41 people on the plane, and confirmed that there were no injuries.

Nearly 600 flights were canceled on Monday alone at O'Hare. Snow reportedly canceled at least 1,500 flights across the country, according to ABC News.

AccuWeather's Blake Naftel reported from Michigan amid the snowy weather, where over 2 feet of snow fell in some spots. Naftel observed mass amounts of lake-effect snow of up to 20 inches. "We're used to like a foot, but this is like 2 to 3 feet!," Bill Nutting, a resident and restaurant co-owner in Bangor, Michigan, told Naftel in an interview. "I just drove with my truck through a drift up to the door handles, it was on a two-track that someone already had broken through, so I wasn't busting it through, but yeah it was deep."

The frigid conditions led to the phenomenon of sea smoke occurring over Lake Superior this week. Sea smoke, which is essentially fog above water, rose around the Aerial Lift Bridge in Duluth, Minnesota, on Nov. 12. It was caused by cold air hitting the warm water of Lake Superior.

"It happens when the air mass is so cold, it makes the water steam like a pot on a stove would," AccuWeather Senior Meteorologist David Samuhel explained.

Uncontrolled wildfires have spread rapidly across portions of Australia amid continuing hot, dry and windy conditions, prompting the government of New South Wales to state that the fire danger had reached catastrophic levels on Tuesday-the government's highest fire danger rating. At least three people have been killed, the BBC reported.

By Wednesday night, the New South Wales Rural Fire Service announced they were still battling 69 fires, with 14 of those posing a threat to properties. Several of the fires had reached or exceeded 173,000 acres.

The blazes aren't only threatening human lives and property. The already small koala population is in danger, with hundreds feared killed in the fire.

For any snowbirds looking to escape the icy conditions that have plagued many parts of the U.S., look no further than the Florida Keys, where summer seemingly never comes to an end. The NWS office in Key West tweeted that Wednesday marked the 231st day that the high temperature there hit at least 80 F. "The high temperature in Key West today was 82 F," NWS Key West wrote on Twitter on Nov. 13. "This is the longest streak of high temps on record at Key West, dating back to 1872."

The streak extended to 233 days as the mercury reached above 80 F once again on Thursday and Friday. Key West's previous long streak of warm weather at or exceeding 80 F was 225 days in a row. That streak came to an end on Oct. 22, 1965.

Venice is underwater once again. The second-highest water level ever recorded left the city with devastating flooding earlier this week. Local officials have blocked off St. Mark's Square and issued a state of disaster declaration as floodwaters forced evacuations. On Tuesday, water levels hit 74 inches at high tide, making it the highest tide level in half a century, the AP reported. And by midweek, 85% of Venice was flooded. At least two people have died, according to the AP. A potent Mediterranean storm system drenched Italy's coast with heavy rain, and as it pushed inland, it coincided with the high tides, resulting in extreme flooding.

The water has left St. Mark's Square and St. Mark's Basilica flooded for the sixth time in 1,200 years, according to Reuters. In a Facebook post on Wednesday, Italy's Prime Minister, Giuseppe Conte, called the flooding in Venice a "disaster" and "a blow to the heart of our country." It had weakened to a deep depression by late Sunday with winds around 31-37 mph. Bulbul originally formed from Tropical Storm Matmo, which had crossed the western Pacific Ocean in October and made landfall in Vietnam.

Bulbul "is the first storm to be named in the western North Pacific and then travel into the North Indian Ocean and become a named storm again since Wilma in 2013," according to Colorado State University Meteorologist Philip Klotzbach.