One person died in a three-vehicle crash on Thursday night after a dangerous day on the roads. 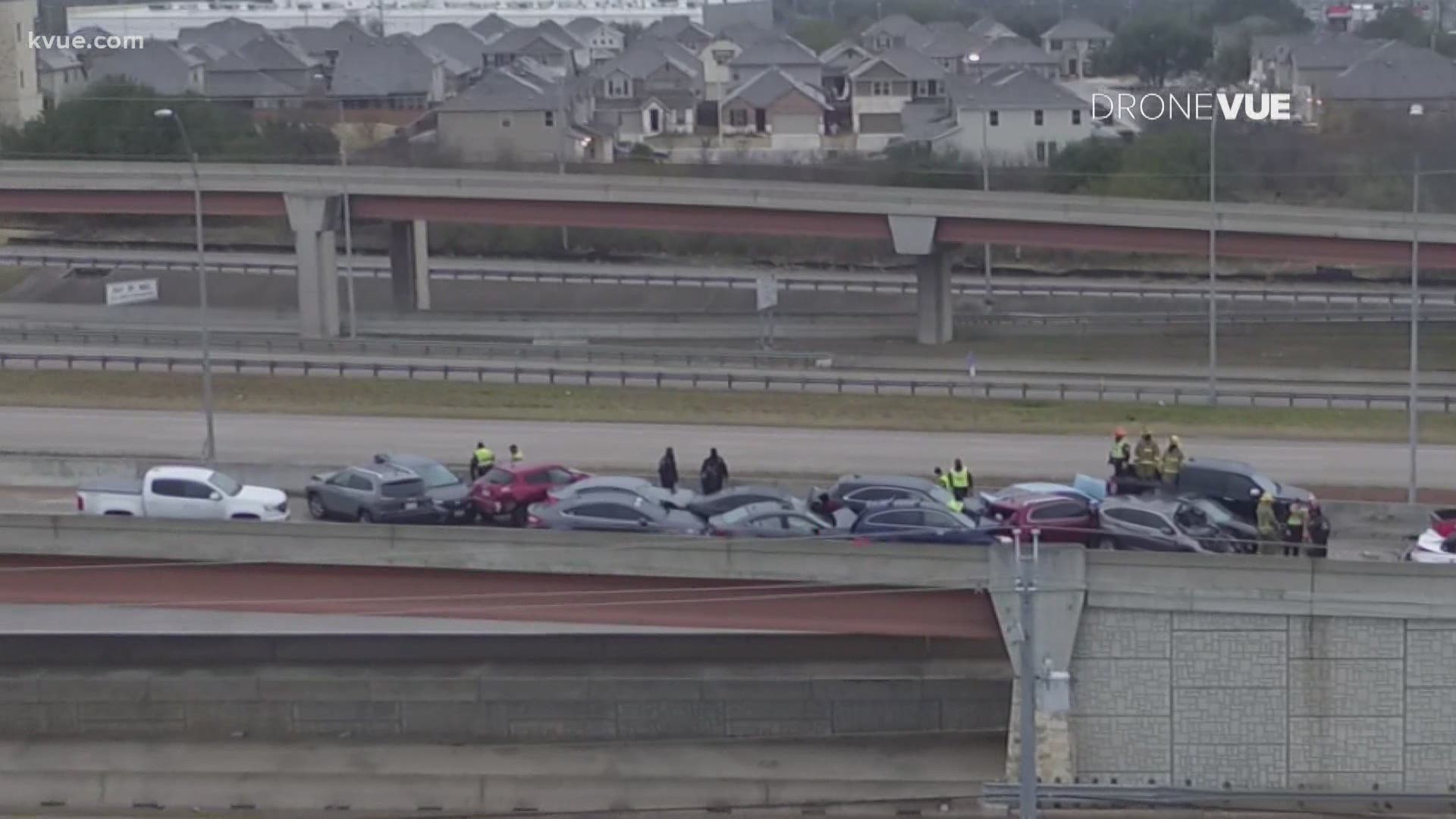 Editor's note: This blog is no longer updating. Check out Friday's traffic blog for updates on road conditions.

A wintry weather forecast has caused some crashes and traffic delays Thursday morning.

The Texas Department of Transportation (TxDOT) began to pretreat bridges and overpasses on major Austin roads on Wednesday in preparation for the expected icy conditions.

10:50 p.m. – Westbound SH 71 is closed at Burleson Road due to a crash. Traffic is detouring to the frontage road at Montopolis Drive.

10 p.m. – One person is dead after a three-vehicle crash at the flyover of US 290 West going to southbound MoPac that happened around 9:45 p.m.

Around 10 p.m., Austin-Travis County EMS crews reported one person had fallen from the flyover. CPR was in progress. Around 10:35 p.m., ATCEMS said one person was pronounced dead on the scene.

Others involved in the crash refused EMS transport.

Motorists are asked to avoid the area and expect closures as an investigation is conducted.

9:50 p.m. – TxDOT is closing the eastbound RM 620 bypass lane near Parmer Lane for the night due to weather conditions.

9:05 p.m. – Austin police and TxDOT are closing U.S. 183 between Cameron Road in Austin to the Cedar Park city limits, an estimated 15-mile stretch, because of ice. People should find other routes, authorities say.

8:40 p.m. – The US 183A toll road will remain closed overnight due to extremely icy conditions.

7:51 p.m. – Northbound US 183 at the San Gabriel River bridge is now being closed due to icy conditions.

7:20 p.m. – An accident was reported on 183A southbound between Brushy Creek Road and South Lakeline Boulevard.

7:16 p.m. – ATCEMS final report states that medics have taken three patients to the hospital (one to St. David's Round Rock and two to Baylor Scott and White Round Rock) with non-life-threatening injuries after the crash on the 13700 block of SH 45.

6:55 p.m. – Three left lanes are blocked after an accident on US 183 northbound at McNeil Drive and Spicewood Springs Road.

Three right lanes are blocked in Cedar Park on 183A southbound at South Lakeline Boulevard.

Another accident was reported on the MoPac frontage road southbound at Duval Road.

6:20 p.m. – First responders are on the scene of a crash involving at least six vehicles near State Highway 45 and FM 620, the same location as a 26-car pileup on Thursday morning.

According to Austin-Travis County EMS, 14 people were involved in the crash, with four possible injuries. Five vehicles will need to be towed.

Three ambulances are on the scene, ATCEMS said.

Motorists are asked to avoid the area and avoid unnecessary travel on Thursday night due to icy weather conditions.

BREAKING: Another collision on SH 45 (same location as this morning). This time involving six vehicles and multiple patients. @KVUE pic.twitter.com/ogN9z4RTUc

6:15 p.m. – Cedar Park police said the 183A toll road will be shut in both directions due to icy conditions. Drivers are asked to find an alternate route.

5:55 p.m. – An accident is blocking the right two lanes on I-35 northbound at Grand Avenue Parkway.

5:40 p.m. – An accident was reported at Capital of Texas northbound and Lost Creek Boulevard.

5:10 p.m. – An accident was reported at Stassney Lane and Westgate Boulevard.

5:05 p.m. – An accident was reported on I-35 southbound frontage road after E. Braker Lane.

4:55 p.m. – An accident is blocking the left lane in Town Center on I-35 northbound at McNeil Road.

4:25 p.m. – An accident was reported on Lamar Boulevard and Kramer Lane.

4:15 p.m. – An accident was reported on I-35 northbound before TX 45, with stop-and-go traffic back to Grand Avenue Parkway.

Another accident on Loop 360 southbound at Ben White Boulevard has been reported, with traffic backing up to MoPac.

Another accident has the left lane blocked on I-35 northbound at McNeil Road.

3:45 p.m. – An accident was reported on Oltorf Street at South Congress Avenue.

3:35 p.m. – An accident was reported on Research Boulevard northbound at Burnet Road.

3:25 p.m. – An accident was reported on Grand Avenue Parkway at Central Commerce Drive.

An accident was reported on TX 183A southbound at Avery Ranch Boulevard.

2:35 p.m. – Lanes on TX 45 Toll westbound at I-35 are closed. Traffic is stopped back to Greenlawn Boulevard and traffic is being diverted at the AW Grimes Boulevard exit.

Closed due to accident in #Austin on TX-45-TOLL WB at I-35, stopped traffic back to Greenlawn Blvd #ATXtraffic https://t.co/8laei8iLor

2:24 p.m. – A two-vehicle crash was reported on the 400 block of Crystal Falls Parkway. Eastbound lanes are closed.

TWO VEHICLE CRASH in the 400 block of Crystal Falls Parkway. All eastbound lanes of Crystal Falls (between Bagdad and US 183) are closed at this time. Please seek alternate routes around the crash scene. #LeanderTraffic pic.twitter.com/Wg3F2xnioF

2:20 p.m. – An accident was reported in Austin on Congress Avenue at Slaughter Lane.

Accident in #Austin on Congress Ave at Slaughter #ATXtraffic https://t.co/8laei8iLor

Reports of a tree down blocking the road on Hero Way West, west of town near Honeycomb Mesa. #LeanderTraffic pic.twitter.com/4RwtGpcUHw

1:39 p.m. – Leander police said the crash on 183A Toll near Crystal Falls Parkway was cleared. There were no injuries.

Crash is cleared. No injuries. Driver cited for traveling too fast for the current conditions (unsafe speed). #LeanderTraffic https://t.co/Vg034KncQn

1:22 p.m. – A crash at the 183A Toll northbound before New Hope Drive has the two right lanes blocked.

1:30 p.m. – A crash at Parmer Lane and Lamar Boulevard has several lanes blocked.

1:09 p.m. – Leander police said that two southbound lanes on Highway 183A toll near Crystal Falls Parkway were closed due to a single-vehicle crash.

10:55 a.m. – The final report from Austin-Travis County EMS said a total of 32 people were involved in the massive car pile-up on SH 45. Five people were taken to the hospital. One of those people has serious injuries and the four others have non-life-threatening injuries.

10:45 a.m. – Leander police said the Highway 183A toll road was reopening after CTRMA treated the roadway.

***183A Toll Road is reopening*** CTRMA has treated the roadway. We will continue to monitor the conditions. Even though it has been treated, please reduce your speed to the icy conditions. #LeanderTraffic https://t.co/rMrFKCmdpC

10:40 a.m. – The Travis County Sheriff's Office said deputies were shutting down FM 1431 due to ice on the roads and one crash in the area.

Deputies shutting down FM 1431 near Tyler Trail due to ice on the roadway and at least one collision at that location.

10:04 a.m. – Out in the Hill Country, the National Weather Service is advising people to not travel along the northern Interstate 35 corridor.

"This cannot be overstated today: PLEASE, DO NOT TRAVEL in the Hill Country and Northern I-35 corridor," the National Weather Service said on Twitter. "Conditions will continue to deteriorate as elevated roadways ice over first followed by other roads.

"Please remain on the frontage road until the icy conditions improve," Leander police said. "We are begging folks to drive to the conditions or not to drive at all."

8:40 a.m. – The Austin Fire Department said there are reports that 26 cars are involved in a pile-up near State Highway 45 and FM 620. According to AFD, it is believed that cars are piled up on the upper and lower deck. There is at least one serious injury. Four people have been taken to the hospital and it's believed that one additional person may be taken to the hospital, Austin-Travis County EMS said.

The APD said the 620 ramp to get on to SH 45 will be closed until the area is clear.

7:08 a.m. – Earlier in the morning, Lender police reported icy road conditions on the San Gabriel River bridge between Highway 29 and FM 2243. According to LPD, the conditions caused multiple crashes at that location.

Cedar Park police said they were shutting down Lakeline Boulevard between Cypress Creek Road and Little Elm Trail due to slippery roads.

Tips on how to drive in wintry weather

TxDOT said drivers should follow these guidelines to keep themselves and others safe:

For real-time roadway conditions in your area, check DriveTexas.org.

List of Central Texas school delays, cancellations due to weather 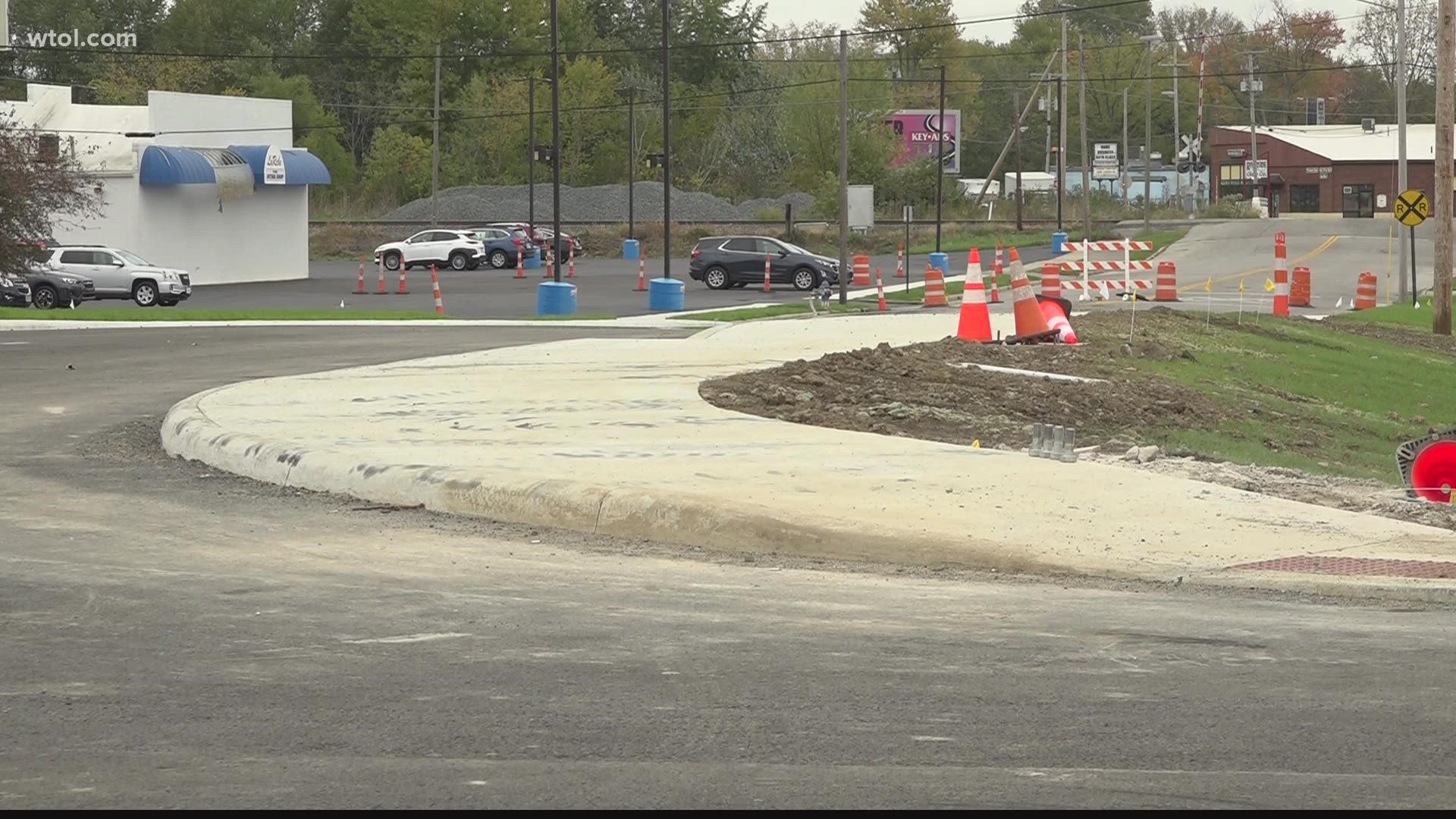 MLK Parkway to remain closed until 2nd week in November