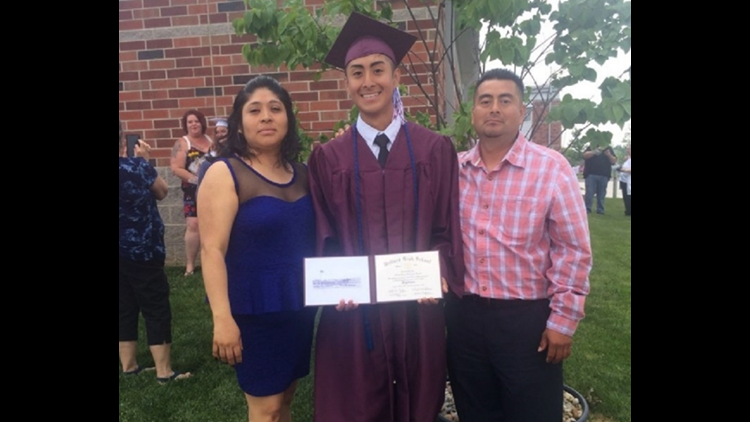 SANDUSKY, OH (WTOL) - Jimmy Rodríguez graduated on June 3 and two days later he drove to his summer job at Corso's Flower and Garden Center with his father, a fellow employee.

On the morning of June 5, federal agents from U.S. Immigration and Customs Enforcement raided two of this business' locations in Sandusky and Castalia, arresting 114 undocumented workers, including the Willard High School graduate and his dad.

"As soon as we came outside those doors, a white SUV Silverado turns on the gravel and an ICE officer comes out with an AR and says, 'Get on the ground,'" Rodríguez recalled.

The 17-year-old arrived in the U.S. at 18 months and is protected under the federal Deferred Action for Childhood Arrivals, or DACA, program.

He described the chaos and confusion behind pictures he snapped and shared exclusively with Toledo's News Leader.

The photographs show officers in military fatigues, K-9 dogs, and Rodriguez said he remembers screams from some of the agents.

He said the detained women and men were scared because they did not know what was going to happen next or if they would see their families again.

"They were tearing up too. They said, 'Please tell my wife, my kids, my family that I'm OK. Tell them what happened. Tell the story. They need to know how we're being treated,'" said Jimmy.

The first in his family to be college bound, Rodríguez said he dreams of becoming a mechanical engineer and said he earned scholarships to attend community college before university.

In the days since his graduation and the ICE raid, his life changed. Those college plans are on hold while he fills the role of his father, working to provide food and a home for his mother and two elementary school-aged brothers.

What keeps him going are the directions from his father who, until then, had followed his own advice.

"Before they took him his last words were 'Stay calm and keep working,'" Rodríguez said.

His father's immigration court date is July 19, when the family will learn if or when he will be deported.