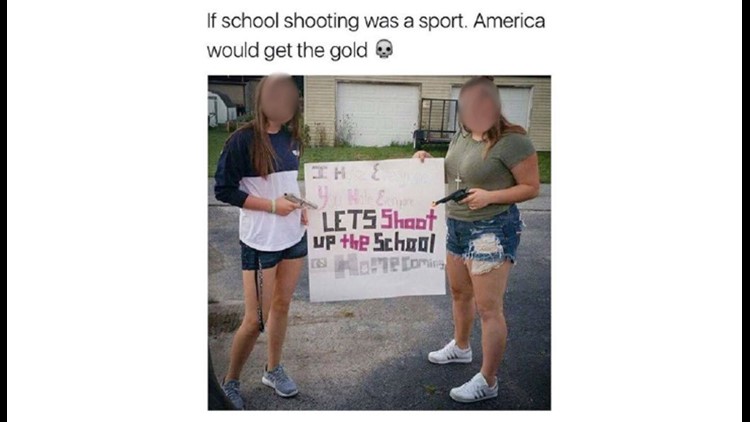 FINDLAY, OH (WTOL) - Two Findlay High School students could face charges for a post they made on Instagram. The post came to light after the information was shared with the district.

In the post, two ninth grade girls are holding toy guns and a homemade sign that reads, "I hate everyone, you hate everyone. Let's shoot up the school at homecoming." Above the post were the words "If school shooting was a sport, America would get the gold (skull emoji)."

"As a school district, we take it very seriously and we're going to make sure that this is dealt with and that discipline is carried out," said Superintendent Ed Kurt.

He along with Principal Craig Kupferberg say the post was an inappropriate take on an online movement to bring people who may not have a lot of friends together.

"The difference is their next statement about shooting at the school is not in the other website's statement, so basically these students took it to a level that you never should take it to," said Kurt.

The students involved have been suspended from school and could still face expulsion and criminal charges - a serious and potentially long term punishment for a simple post on social media.

"Once it's posted it never goes away, so you need to think about what you're posting," said Kupferberg.

He says the district considers safety their number one priority and that the students feel safe because of the measures they've taken.

"They feel safe letting us know something is happening that they are concerned about, and they know were going to take it serious and follow up and do what's right and appropriate," said Kupferberg.

The Superintendent says since the threat was not credible, homecoming activities will go on as planned.

On Wednesday, Sept. 21, Findlay police concluded their investigation, labeling the incident as disorderly conduct, according to the Findlay Courier. The Hancock County Prosecutor's Office will now decide whether or not to charge the girls involved with juvenile delinquency for disorderly conduct, a fourth-degree misdemeanor.