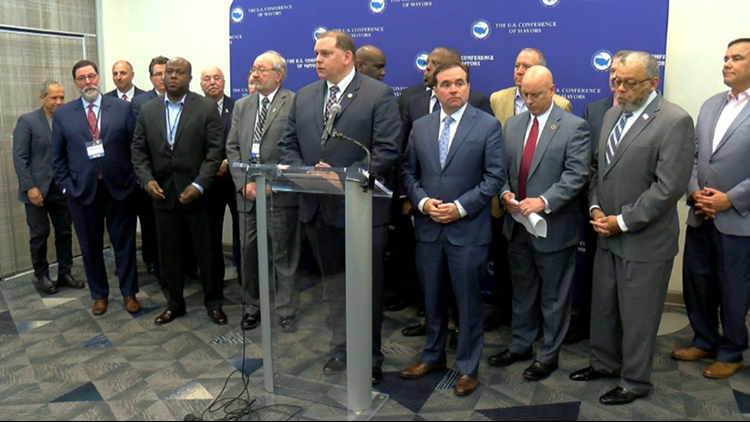 TOLEDO (WTOL) - Toledo hosted mayors from all across the country this week to discuss gun violence, and the ways local elected officials can stop it.

The US Conference of Mayors organized this two-day conference in downtown Toledo.

But it wasn't just mayors in attendance, but also law enforcement officials, activists groups, and even gun violence survivors, all trying to see if they can solve this nation wide issue at the community level.

The conference was closed to the public and media, but a group of the mayors and police chiefs spoke to the media in a press conference.

The consensus is that gun violence is a problem that is progressively getting worse, not better at a national level. The goal of the conference was to find a way to solve some of those national gun violence problems through local policies and laws.

In attendance were the Mayors of Cincinnati and Pittsburgh, two large cities who have recently seen high profile mass shooting events.

“Mentally ill people, who have a propensity to commit violence should be forbidden by a court order through due process from possessing and buying a gun,” said Mayor John Cranley of Cincinnati.

Mayor Cranley agreed with Toledo Mayor Kapszukiewicz that cities should only buy from credible arms manufacturers for their police forces.

“To use our consumer power, that isn’t subject to right wing extremist legislatures that take away our powers. Because we are the ones who buy guns and bullets,” said Cranley.

Mayor William Peduto of Pittsburgh believes local governments can’t wait for gun violence to be solved by the state or federal government.

"As mayors, we can't sit back and say that doing nothing will solve the problem. We have to roll up our sleeves and find ways in order to be able to address it." said Mayor Peduto

Everyone in attendance from both political parties all agreed that waiting for a solution from the state level or the federal government won’t work because of groups like the NRA and other lobbying groups. They believe the solution needs to be implemented at the local level until federal officials see it could work.

“We have Republicans and Democrats represented, who all believe that we can act collectively to make sure that we provide safe communities for our families to live in,” said Mayor Steve Benjamin of Columbia, South Carolina.

Some ideas discussed at the conference were to eliminate bans on Red Flag Laws, which could allow courts to take away a gun if the owner is believed to be dangerous.

They also talked about not allowing provisions in city charters that are written by gun industry lobbyists.

“People should be able to go church or synagogue and pray without fear of getting shot. Kids ought to be able to go to school without worrying about somebody walking in there and taking their lives,” said Charles Ramsey, former Chief of Police of Pittsburgh and Washington D.C.

More information on the U.S. Conference of Mayors can be found here.