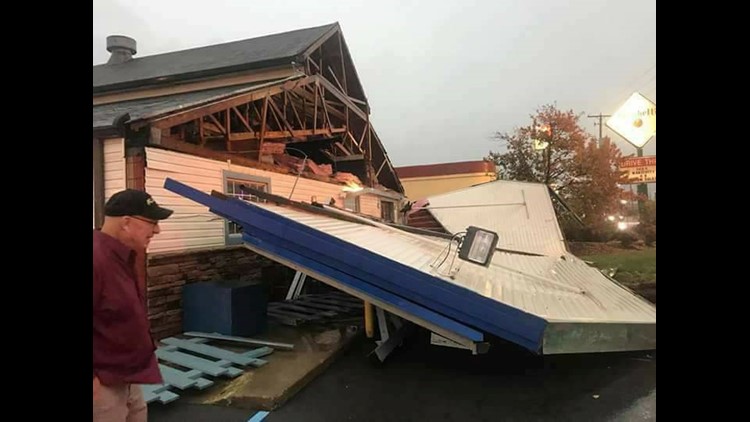 According to the Findlay Mayor's Office, at about 4:09 p.m., the city received a call of a tornado touchdown at Highland Estates, near Melrose and Crystal Avenues. The city says there are no reports of injuries thus far.

On Sunday evening a mandatory evacuation order was issued by the City of Findlay for residents of Highland Estates due to reports of gas leaks. The evacuation was lifted late Sunday night.

The American Red Cross has set up a shelter at 50 North, a senior services center, on East Melrose for those displaced. The Red Cross said the shelter is open for anyone needing a safe place to stay.

Pets in cages are allowed at the shelter. The Hancock County Humane Society said it will be able to take ten dogs and ten cats of evacuated residents.

The city says residents will be informed when they can return to their homes.

Findlay Schools will also be closed on Monday due to damage.

Most of the damage happened on the city's north side, including to the Ralphie's restaurant and and other business near Trenton Ave.

A possible tornado touched down in Sandusky County, destroying a house.

WTOL talked to the owners of the home. There was a couple inside, but they escaped uninjured.

There were reports of a pole barn having been destroyed near County Rds. 138 and 21 outside of Bellevue.

There was also damage reported in Arcadia, Wauseon, Celina and Castalia,

Many who are affected are from the Archbold and Wauseon area. The La Choy factory located in Archbold has significant wind damage. Its roof was severely damaged causing debris to blow and scatter around the area.

Some of the debris has blocked railroad tracks near the factory.

A tornado warning was issued for Seneca and Huron Counties around 5 p.m. That warning has since expired.