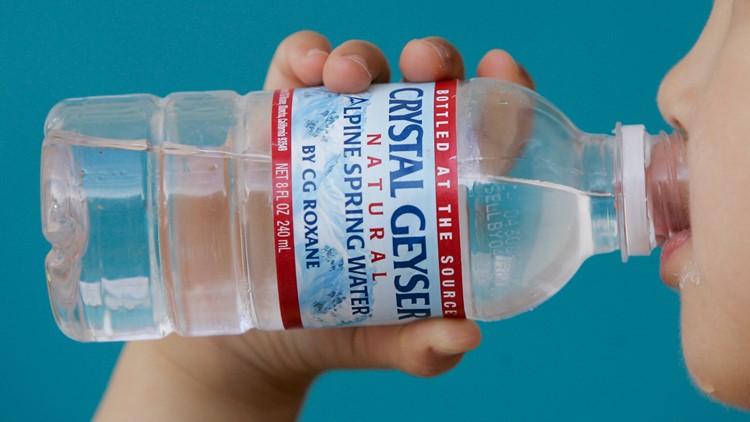 Photo by: AP
In this May 3, 2008, file photo, a child drinks from a Crystal Geyser water bottle in Palo Alto, Calif., A California bottled water company has been charged with environmental crimes for illegally disposing of arsenic-tainted wastewater. Federal prosecutors in Los Angeles announced charges Thursday, July 19, 2018, against the company that bottles Crystal Geyser water and two companies that transported and dumped the toxic waste. Prosecutors say the companies failed to disclose the contents on shipping manifests and it was taken to a facility not permitted to treat hazardous waste. (AP Photo/Paul Sakuma, File)

Crystal Geyser's parent company, CG Roxane, along with two contracted companies, were charged in 2018 with violating the Resource Conservation and Recovery Act and Hazardous Materials Transportation Act by their alleged failure to disclose information regarding arsenic in wastewater transported from the bottling plant in Olancha.

A message sent to a Crystal Geyser representative was not immediately answered.

According to court records, Crystal Geyser created an "arsenic pond" in a remote part of eastern California between Death Valley and the Sequoia National Forest and then didn't disclose that water pumped out of the pond and delivered to water treatment plants contained the poisonous heavy metal.

United Pumping Services, a City of Industry waste-hauling corporation, and United Storm Water, an Industry-based company providing environmental and lake draining services, were also charged in the 16-count indictment for violations that allegedly happened in March and May 2015. The contracted companies face trial in April in Los Angeles federal court.

The case focuses on the bottling plant's wastewater, not the safety or quality of Crystal Geyser's water, prosecutors said.

U.S. District Senior Judge S. James Otero set a Feb. 24 sentencing hearing, at which time the company is expected to be ordered to pay a $5 million fine, records show.

Olancha is in Inyo County, about 200 miles north of Los Angeles.