After a dominant regular season, the Cherokee are now set to compete in the USPHL Premier Division National Championships in Virginia. 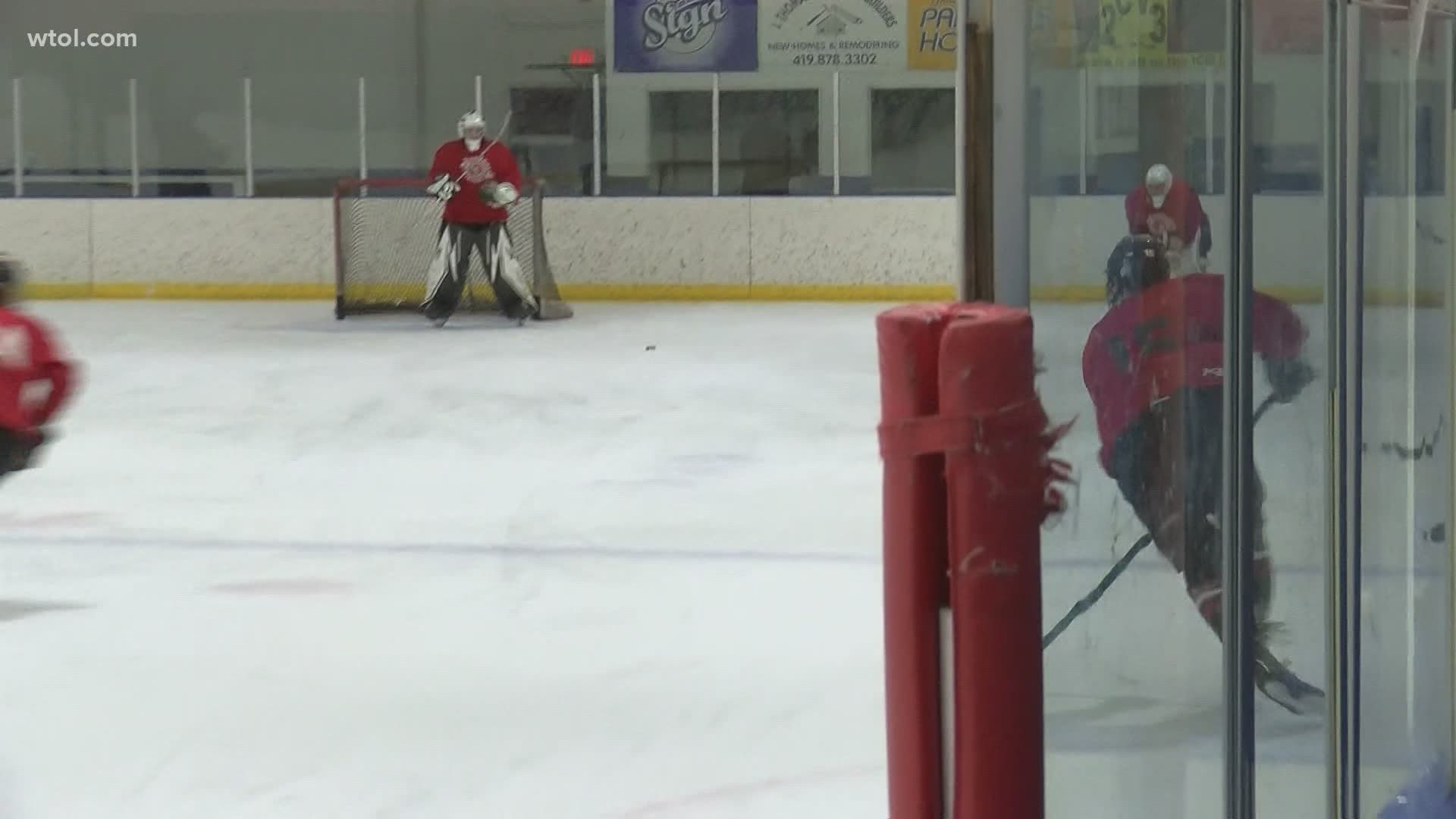 TOLEDO, Ohio — In a year with no Toledo Walleye, the Cherokee are providing some excitement on the ice for northwest Ohio.

The junior hockey team from the Glass City checked in to a hotel in Virginia Wednesday night.

But it's not for a vacation.

Instead, it's more like a business trip. The Toledo Cherokee team is set to participate in the USPHL Premier Division National Championships after a stellar regular season.

"We came into the season with high expectations and we just wanna live up to them," said center Zeth Stelmaszak, now in his second year with the Cherokee.

During the 2020 playoffs, Stelmaszak was good for 7 points in 4 games. The Cherokee were ousted when the Pittsburgh Vengeance swept them in the second round, shortly before playoffs were called off due to the pandemic.

This year, the Cherokee earned a first round bye and busted out the brooms in the second round to return the favor and sweep the Vengeance in a best of three. The Cherokee scored 10 goals in 2 games to punch their ticket to the national championships.

They limited the Vengeance to 2 goals total.

"Going into Christmas break, we made a couple moves and got some new guys in and started practicing with them and I feel like that's when we knew it was real," said Stelmaszak.

Credit: Toledo Cherokee
"We came into the season with high expectations and we just wanna live up to them," said center Zeth Stelmaszak.

"Guys just started buying in to what we were doing and it’s been special pretty much all year, but since Christmas for sure," agreed head coach Kenny Miller.

So what makes this team so special?

You could say it's a perfect storm of talent that started brewing right here in Toledo.

The team is loaded with local players such as David Crandall from Northview High School.

Crandall started the year with the Cherokee before returning to Northview to finish off his senior season. Crandall was a huge part of the Wildcats' playoff run, which was cut short by the eventual state champions St. Francis.

"These guys are so welcoming and it's a new team since I left, but I love these guys," said Crandall. "Just hard working and always got each other's backs and so welcoming."

He finished the regular season with 17 points and a whopping 57 penalty minutes in 14 games played before he made the temporary switch from a Cherokee jersey to a Wildcats one in November.

Credit: Toledo Cherokee
David Crandall started the year with the Toledo Cherokee before returning to the Northview Wildcats to finish off his senior season.

"He's a really good kid and we were sad to see him go, but we knew that he was going and gonna play his senior year," said Miller. "And for us to be able to get him back prior to the second round of playoffs is big for us. And he fits in with everybody in that dressing room and he's definitely a difference maker out there and he was big for us. He had four assists in two games. He's definitely a guy we're gonna count on when we get down there this week."

But it's not just Crandall.

This team thrives off players grown within the system, with several players who spent time on youth teams within the Toledo Cherokee program before graduating to the USPHL Premier team.

Some are from the northwest Ohio area, like Kyle Kucway, Jake Ruehle and Seth Orozco from Sylvania. Caleb Williams hails from Genoa, Matt Snyder from Waterville and captain Bryce Davis from Elmore.

Timmy Organ Jr. and others played for St. Francis. Even if they weren't raised in the Cherokee system, many of them are not too far from home.

If they're not from Ohio, a good amount of the guys are from the mitten state. Stelmaszak is from Temperance. And you'll see a lot of names on the roster who are graduates of Trenton High School. It's no coincidence. Trenton High is a powerhouse school for hockey in Michigan.

The Cherokee are backstopped by a goaltender who won several awards and was among the top in Michigan high school hockey during his varsity career at Trenton.

Joey Cormier might not be the biggest in net, but he makes up for it in skill. His play might remind you of a certain local fan favorite Toledo Walleye goaltender, Jeff Lerg.

Cormier's stats are also stellar at 14th best in the USPHL Premier regular season with a save percentage of 0.925. And, he's just a rookie.

Some of the guys who are a bit farther from home include goaltender Christopher Strasen from Bremerhaven, Germany and forward Ondrej Dupal from Liberec, Czech Republic.

Marcello de Antunano, who started the season with the Cherokee and recently returned, is from Texas. de Antunano is a goaltender for Team Mexico's junior team, attending three Division 3 World Junior Championships; two with the under-18 and one with the under-20 team.

He, too, had a phenomenal record in net during the regular season for the Cherokee.

The Cherokee are strong in goal, but their skaters are also known for spending a lot of the time in the penalty box -- to the tune of 1043 minutes in 44 regular season games, sixth most in the league among 62 teams total.

Yet it's that grit and physicality that help the Cherokee thrive. While they can play a finesse game, they also throw down for their teammates.

Outside of penalty minutes and goaltending, they've got speed. Even though the team may not be the biggest, they're definitely quick. Bailey Byrd, in his third year with the Cherokee, set a career-best and team-best 60 points this season.

Even defenseman Organ has wheels and is 4th in scoring. He's just one of several players who college scouts likely have their eyes on from a team whose players currently range in age from 18 to 21.

Eight players, including Organ, Welsch and Higgins, will age out of the USPHL after this season, making this their final shot at a championship at the junior level.

Many of these guys stick together for the next step, with several past and present committing to NCAA Division III Trine University. It's not unusual for Cherokee players to go on to the college level after their years here in Toledo.

But right now? The focus is on Hampton Roads, Virginia.

"It's wonderful. I know that we haven't been there in a while, so it's great to represent the Toledo area and going down and competing in the national championship," said Crandall.

670 miles from Toledo, the Cherokee checked into a hotel for what they hope will be an extended stay.

"Hopefully we get the job done," said Crandall. "And I know we got the team to do it this year."

The Toledo Cherokee play their first game of the USPHL Premier Finals against the Minnesota Moose at 3:50 p.m. Thursday.