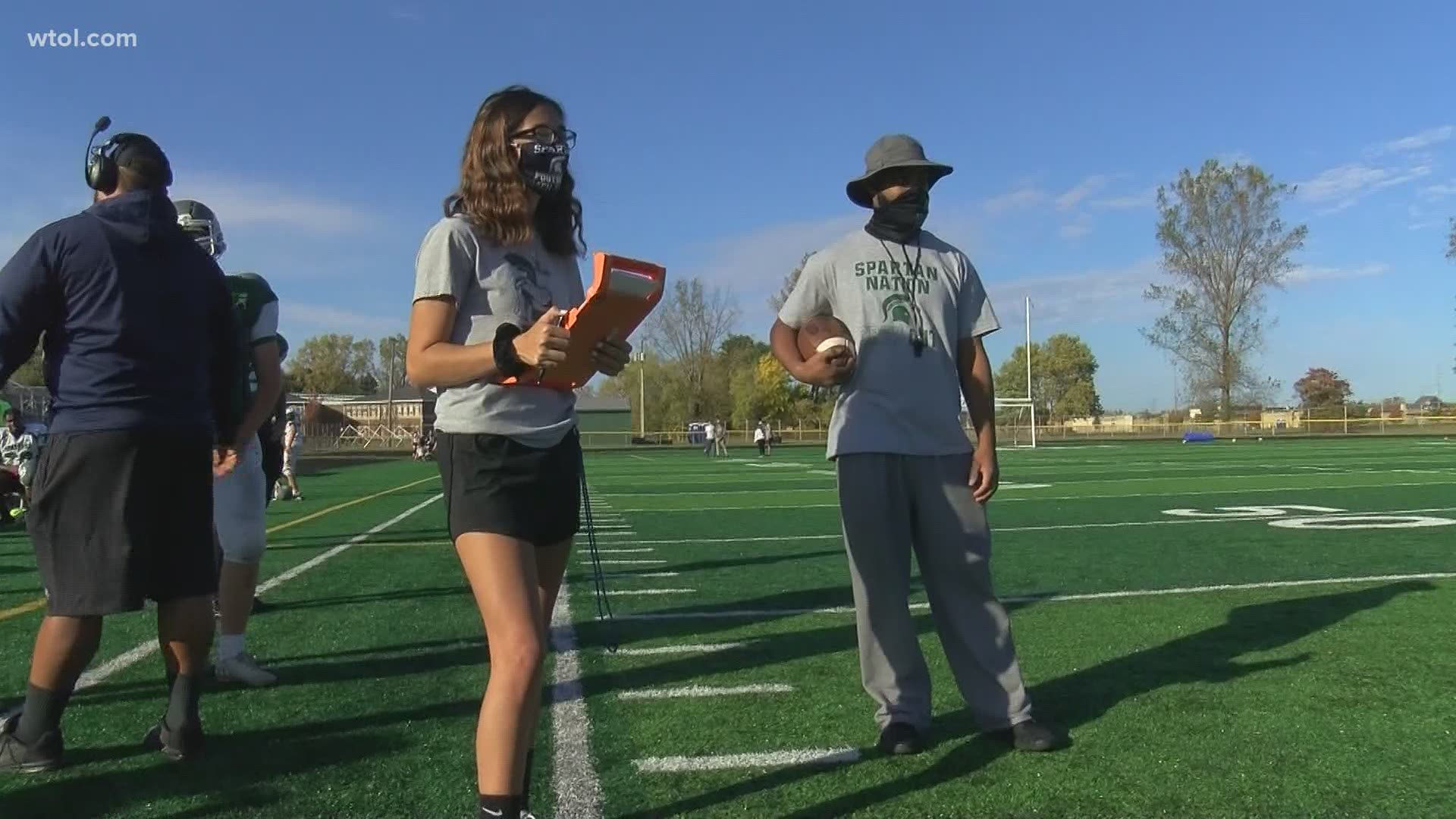 When Godfrey Lewis was named head coach at Start, he knew he had a lot to learn as a new head coach. But when he was filling out his coaching staff, he got some help from where he least expected it, Senior Taylor Urbina, who was already an experienced football coach in her own right.

Godfrey Lewis had a very distinguished football career. He played for Urban Meyer at BGSU. He later went on to play in the Canadian Football League. He’s been an assistant coach locally for a couple different programs, but in 2020, he got his first shot to be a head coach. He learned quickly, you need a lot of help to run a program.

After his first team meeting, a student came up to him and offered to help.

Taylor Urbina grew up with football. At age 10, playing for her dad, Taylor got her first taste of football.

As her dad tells the story, he put her at left guard and she fell in love with the sport.

“I mean, I’ve always liked watching it. I watched it with my father. And it’s a good sport to watch. I like the physicalness of it,” said Taylor.

“She enjoyed contact. She player with her brother as well, so the chance to hit him and not get in trouble for that, she liked that a lot,” said Thompson.

Once she stopped playing, she quickly transitioned to coaching youth football.

The dynamic for Coach Taylor is an interesting one. She’s still a student at Start, but she’s got the respect of everyone in the program.

“To everyone, she’s Coach Taylor, and she’s involved in the school, so she has a lot of respect from all the players out here,” said Coach Lewis. “She’s already sort of a leader, so everyone looks at her the same way out on the football field.”

Taylor is happy to have the team’s respect.

“The way I see it is, it’s good to have someone, not really like your age, but kind of close to experiencing the same things that you are,” said Taylor. “A lot of them, I know them, I have them in classes. So they respect me, and they all address me a ‘Coach Taylor’ so it feels nice that way.”

Taylor has been coaching youth football for the Point Place Lions for years. Her dad believes she could run the entire program right now. But she’s used to the doubters and she’s happy to silence any critics.

“When I first started, a lot of them were like ‘uh, I don’t know.’ It happens a lot with the parents, with my little league. They’re like, ‘we’ll test this out for a bit.’ But once they see that I actually care about their players, their sons and daughters, they realize that I’m in it for a good reason,” said Taylor.

On the field Taylor helps with film and game planning and keeping the team on schedule. Off the field she helps with COVID-19 protocols and so much more.

“She’ll see a play on TV and say ‘hey, we run something like that’ and we’ll rewind it on TV and play it again and she’ll explain why this guy is doing that and why he’s doing that. And we’ll watch another game and she’ll tell you what they’re going to do before they do it,” said Thompson.

As a female in an almost completely male-exclusive industry, Taylor has been knocking down barriers, and she’s hoping her story will serve as inspiration to other girls everywhere.

“Well that’s always my goal really, I’ve had a couple of girls come up to me and their parents after practices or games and say ‘you know it’s really cool what you’re doing, like you don’t see it much.’ And I think the ultimate goal is to make it an easier process for other girls, who are interested,” said Taylor.

Taylor says she hopes to one day go into sports administration.