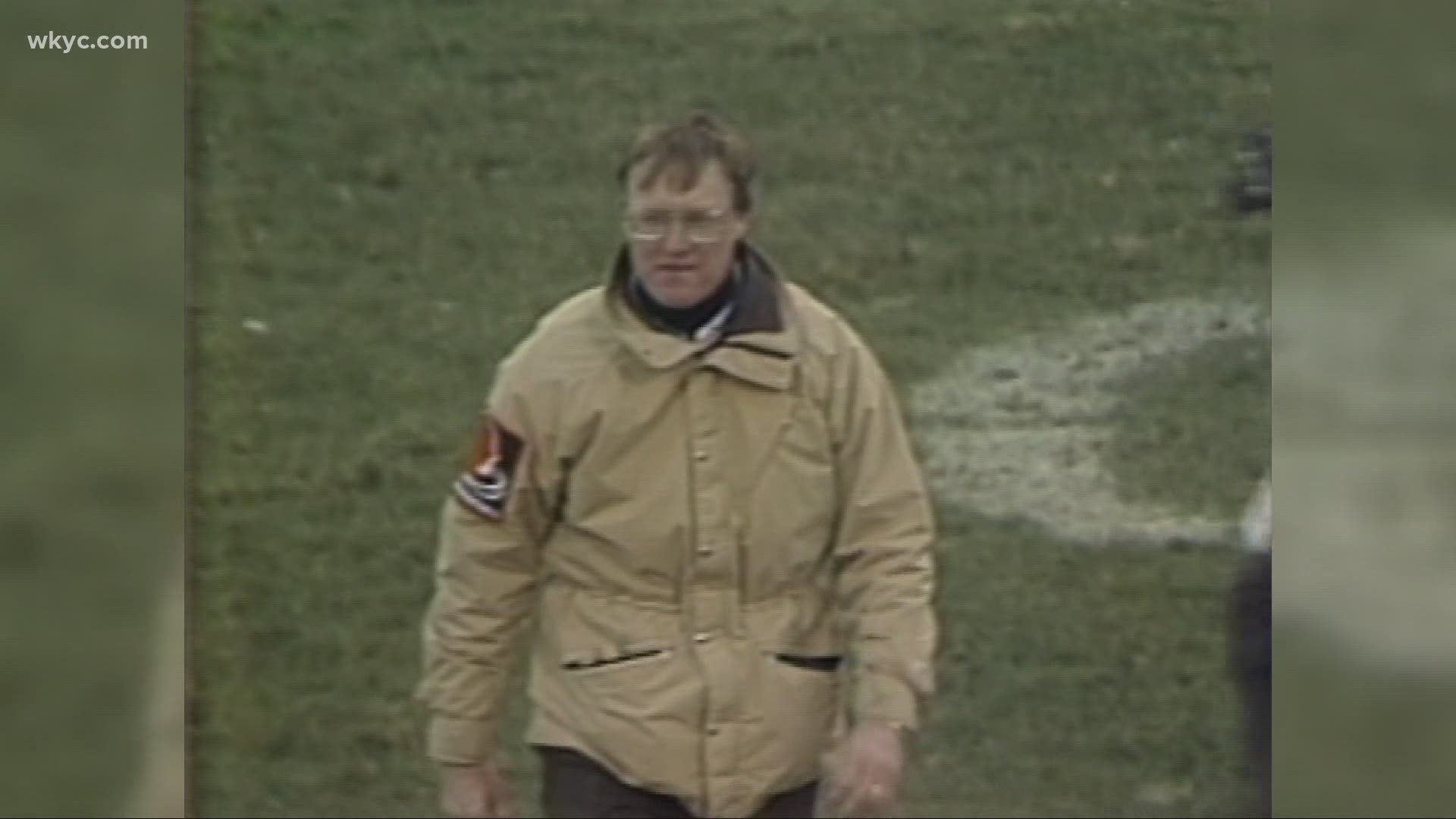 “The Cleveland Browns are saddened to learn of the passing of Marty Schottenheimer," the team said in a statement. "As a head coach, he led the organization to four playoff appearances and three divisional titles, but it was his tough, hard-nosed, never give up the fight attitude the team embodied that endeared him to Browns fans and often led to thrilling victories. His impact on the game of football was not only felt in Northeast Ohio but across the entire NFL. Our thoughts and prayers are with his wife, Pat, and his entire family.”

"As a family we are surrounding him with love," wife Pat Schottenheimer wrote last week in the announcement that her husband had been moved to hospice. "And are soaking up the prayers and support from all those he impacted in his incredible life. In the way he taught us all, we are putting one foot in front of the other....one play at a time."

“One play at a time” was just one of the many mottos that Schottenheimer used to motivate teams during his 21 seasons as an NFL head coach. The native of Canonsburg, Pennsylvania was drafted by the Buffalo Bills in the American Football League in 1965. After four seasons with the Bills, Schottenheimer was traded to the then-Boston Patriots and would play two seasons before retiring in 1971.

Schottenheimer moved his way up the coaching ladder, starting first as an assistant in the World Football League with the Portland Storm in 1974. He then served on the coaching staffs of the New York Giants and Detroit Lions before arriving in Cleveland in 1980, where he served as the defensive coordinator for the Browns until being promoted to replace the fired Sam Rutigliano as head coach midway through the 1984 season. Under Schottenheimer, the Browns finished 4-4 to close out the year.

The promotion of Schottenheimer as head coach and the selection of quarterback Bernie Kosar in the 1985 NFL supplemental draft would help usher in one of the most memorable periods of Browns history as the team would win three consecutive AFC Central Division titles and make the playoffs for four straight years. An 8-8 record proved good enough to win the division in 1985 as the Browns advanced to the AFC Divisional Playoffs at Miami. In what would become a familiar pattern for the Browns and Schottenheimer, Cleveland jumped out to a 21-3 lead, only to watch Miami rally to win 24-21.

More triumph and heartbreak would await the Browns in 1986 and 1987 as the team advanced to back-to-back AFC Championship Games, falling both times to John Elway and the Denver Broncos in excruciating fashion. The Browns were 12-4 in 1986 and advanced to the AFC title game after a memorable double-overtime win over the New York Jets in the divisional round. It looked like the Browns were headed to the Super Bowl when they took a 20-13 lead over the Broncos with 6:48 to play and Denver backed up to their own 2-yard-line before Elway executed what would be forever known as “The Drive.” The Broncos went 98 yards to score the tying touchdown, then scored on a field goal in overtime to advance to Super Bowl XXI.

Schottenheimer was named the AFC's Coach of the Year in 1986.

The Browns and Schottenheimer would get another shot at Elway and the Broncos in 1987’s AFC Championship Game, this time at Denver’s Mile High Stadium. Early mistakes by the Browns helped Denver grab a 21-3 lead at halftime. A heroic comeback led by Kosar and running back Earnest Byner brought the Browns back in the game. Trailing 38-31 with less than a minute to play in regulation, Byner was stripped of the football as he was headed to the end zone and Denver recovered to put the game away. “The Fumble” would add yet another chapter to Cleveland sports lore.

While in Cleveland, Schottenheimer became famous for things he said before and during games, just as much as how his Browns played on the field. “One play at a time” would lead to “There’s a gleam, men” or “This is the Browns’ period.” His motivational speeches were often featured on NFL Films and years later, his players still spoke fondly of how much Schottenheimer’s words meant to them.

He also became synonymous with a certain type of game plan that became known as “MartyBall.” A conservative approach with running the football and defense as the emphasis. As popular as Schottenheimer was while the Browns were racking up division titles, his emphasis on running the ball to protect thin leads or playing the prevent defense to take away the big play began to wear thin as the playoff losses continued to mount.

Despite a rash of quarterback injuries in 1988, Schottenheimer guided the Browns to a fourth consecutive playoff appearance as the team advanced to the AFC Wild Card game. That season, Schottenheimer had assumed the role of offensive play caller in addition to head coach. Just a few days after the Browns were beaten by the Oilers in the Wild Card game, Schottenheimer was summoned to a meeting with owner Art Modell and told that the team would need to hire an offensive coordinator for the 1989 season. Schottenheimer refused to budge on relinquishing his dual role and resigned.

“It became evident that some of the differences we had, we weren’t going to be able to resolve,” Schottenheimer said in his announcement of his departure. “We came to an agreement that it was in everybody’s best interest that we part company. I appreciate the opportunity Art gave me to become a head coach. The only regret I have is that (Modell) and I and this football team together weren’t able to achieve the goal we set for ourselves.”

As he would so often do in his career, Schottenheimer turned adversity into opportunity, as he was hired almost immediately by the Kansas City Chiefs as head coach. In his ten years with the Chiefs, Schottenheimer posted a 101–58–1 regular season record (.634) with three AFC West championships, and seven playoff appearances. Yet again, he was unable to win the big one. Despite having future Hall of Famer Joe Montana at quarterback, the Chiefs lost to the Bills in the 1993 AFC Championship Game. Kansas City would also lose home playoff games in 1995 and 1997.

Schottenheimer spent one year with the Washington Redskins as head coach in 2001, guiding them to an 8-8 record before being ushered out by owner Daniel Snyder to make way for University of Florida head coach Steve Spurrier. His final NFL head coaching opportunity came with the San Diego Chargers from 2002-06. Schottenheimer guided the Chargers to two playoff appearances, including home field advantage in 2006 after a 14-2 regular season. But San Diego lost to Tom Brady and the New England Patriots in the AFC Divisional round. Weeks after the loss, Schottenheimer was let go due to what was termed a "dysfunctional situation" between he and San Diego general manager A.J. Smith.

There was one last moment of football glory for Marty Schottenheimer. In 2011, he guided the Virgina Destroyers of the United Football League to a league championship.

For his career, Schottenheimer tallied 205 wins, putting him eighth on the NFL’s all-time list. He is the only eligible head coach with at least 200 victories who has not been inducted into the Pro Football Hall of Fame. His winning percentage in the regular season was .613, but what is often remembered about Schottenheimer’s coaching resume is his 5-13 record in the playoffs, including three losses in the AFC Championship Game.

“You like to think that when you do it well enough to get to the playoffs that many times, you ought to be able to do a better job. And we didn’t. We clamored at the bottom rung where we could see it (Super Bowl), but we couldn’t get to it,” Schottenheimer said years later when he was profiled on the NFL Network’s "A Football Life."

One of Marty Schottenheimer’s legacies is mentoring his assistants to have future NFL head coaching success. Two of his proteges, Tony Dungy and Bill Cowher, have both won Super Bowls and have been elected to the Hall of Fame (Cowher is still waiting on his official induction due to COVID-19), while Mike McCarthy won a Super Bowl while serving as head coach of the Packers. This past Sunday, Bruce Arians became the fourth former Schottenheimer assistant to win a Lombardi Trophy as a head coach when he lead Tampa Bay to victory in Super Bowl LV against Kansas City.

Schottenheimer is survived by his wife Pat, who he married in 1968, and children Kristin and Brian. Brian Schottenheimer has followed his father into NFL coaching, currently serving as the quarterbacks coach and passing game coordinator of the Jacksonville Jaguars.