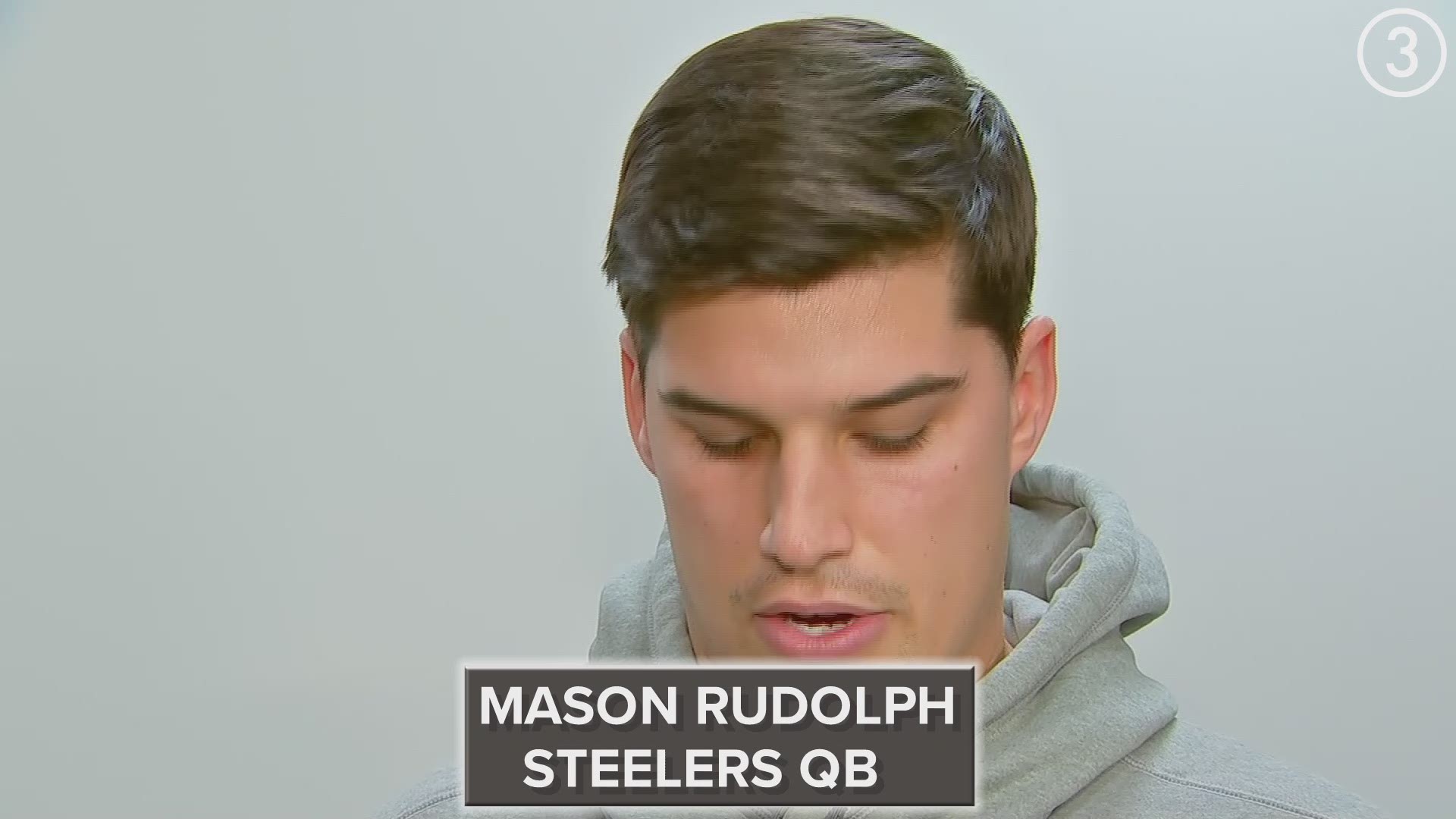 Rudolph was contrite about his actions, but when asked if he said anything that drew such an emotional response for Garrett on the third-to-last play of the Browns’ 21-7 win over the Steelers, the second-year quarterback denied that words were exchanged.

“I definitely didn’t say anything that escalated it, but like I said, I have to do a better job of keeping my composure in those situations, and I think it was an unfortunate situation for both teams involved,” Rudolph said.

Garrett was suspended indefinitely just 12 hours after the win over the Steelers for an on-field brawl that resulted in his ejection, as well as the disqualifications of Browns defensive tackle Larry Ogunjobi and Steelers offensive lineman Maurkice Pouncey.

The incident boiled over when Garrett brought Rudolph to the ground well after a third-down play with eight seconds remaining in the game.

After the hit, Rudolph appeared to rip off Garrett’s helmet after delivering a couple of kicks below the belt of the Pro Bowl defensive end. Garrett responded by ripping off Rudolph’s helmet with several powerful tugs, and later, swinging it at and connecting to the quarterback’s head when the signal-caller pursued the matter further.

After Garrett ended up on the ground after getting tangled up with Steelers offensive lineman David DeCastro, Pouncey tried to protect his quarterback and delivered several kicks to the helmet and multiple punches to the Browns’ Pro Bowl defensive end.

Credit: AP
Cleveland Browns defensive end Myles Garrett walks off the field after he was ejected late in the fourth quarter of an NFL football game against the Pittsburgh Steelers, Thursday, Nov. 14, 2019, in Cleveland. The Browns won 21-7. (AP Photo/David Richard)

It was then that Ogunjobi escalated further the already volatile situation by pushing Rudolph from behind and to the ground, at which time, players left both benches and a scrum ensued in the end zone that took several minutes to get under control.

“Thursday night, to say the least, it was an unfortunate situation for everyone involved,” Rudolph said. “I consider it a privilege, not a right, to be part of the NFL, to be part of a first-class organization representing the Rooney family and the Pittsburgh Steelers. I fell short of that expectation last Thursday night in how I played. I did not do a good enough job to help our team win the game.

“The way I saw it, on the final play of the game, with the game in hand the way it was…we had already lost two of our players to targeting penalties from the game. As I released the ball, I took a late shot, did not agree with the way he then took me to the ground. My natural reaction was to just get him off from on top of me.”

Credit: Ron Schwane/AP
Cleveland Browns defensive end Myles Garrett, left, gets ready to hit Pittsburgh Steelers quarterback Mason Rudolph, second from left, with a helmet during the second half of a game at FirstEnergy Stadium in Cleveland on Thursday, November 14, 2019.

In addition to regretting the situation because it cost Pouncey a three-game suspension and the Steelers a $250,000 fine, Rudolph acknowledged that he “was probably fortunate the way it went down” despite getting hit in the head with his own helmet.

“I should have done a better job handling that situation,” Rudolph said. “I have no ill-will towards Myles Garrett, great respect for his ability as a player. I know if Myles could go back, he would handle the situation differently.

“As for my involvement last week, there is no acceptable excuse. The bottom line is I should have done a better job keeping my composure in that situation. I fell short of what I believe it means to be a Pittsburgh Steeler and a member of the NFL.”