Is this LSU team the greatest college football team of all time? 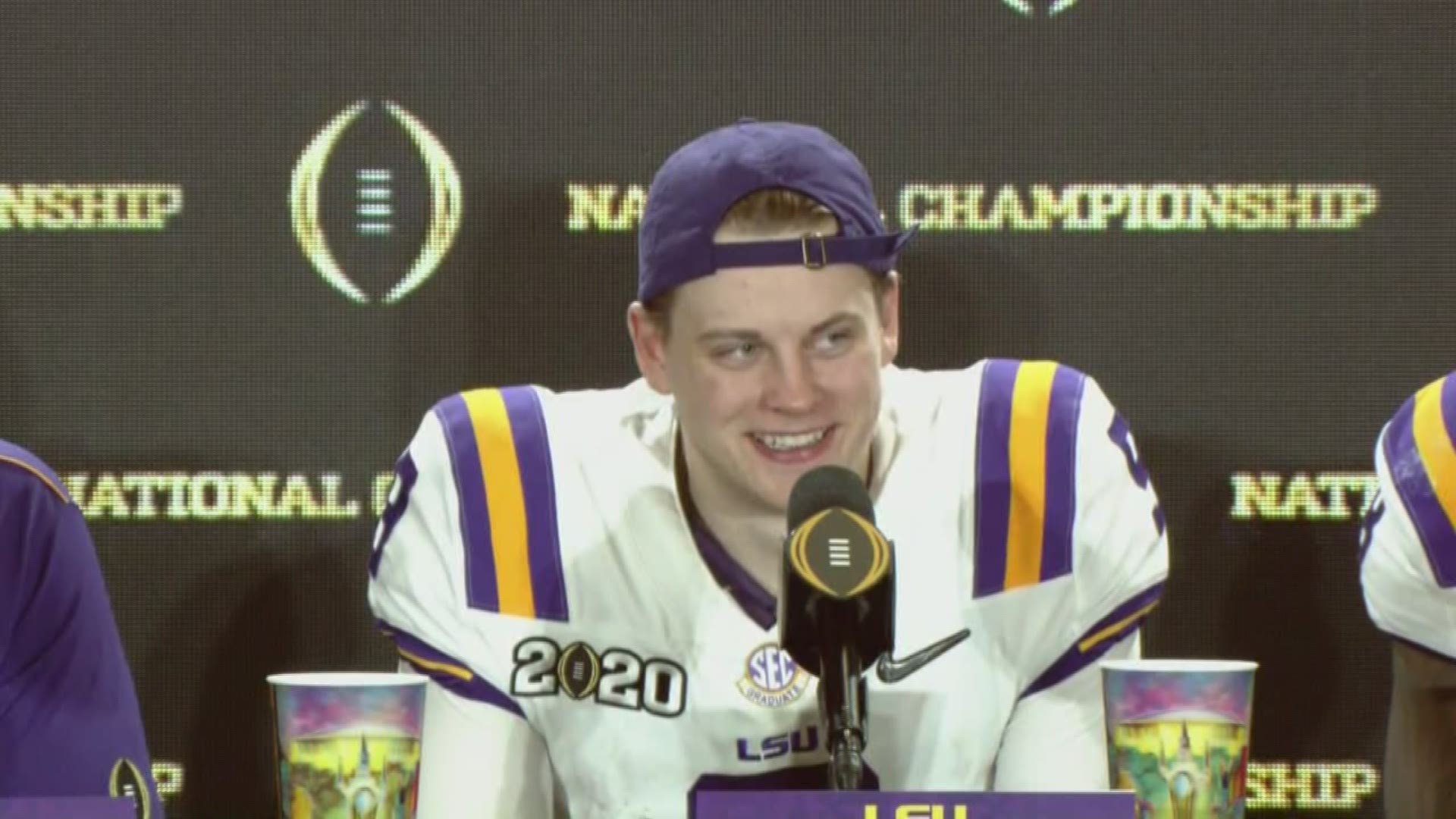 NEW ORLEANS — Is LSU the greatest College Football Team of all time?

A perfect season. An All-Time great offense. Wins against some of college footballs biggest names. LSU did it all and more this season, but did they do enough to earn the title of greatest college football team of all time?

They’re definitely in the conversation, along with other unbeaten champions like the 1995 Nebraska Cornhuskers, 1999 Florida State Seminoles, 2001 Miami Hurricanes, 2004 Southern California Trojans and last year’s undefeated Clemson Tigers, whose win streak lasted until they met LSU on Monday.

Let’s take a look at their resume:

LSU faced on of the toughest schedules in the country this season, playing games against multiple top 10 teams and blowing them all out of the water.

LSU’s first top-10 matchup came against the Texas Longhorn, then ranked No. 9 in the country. The wild 45-38 win was a coming out party for LSU’s revamped offense. Joe Burrow  threw for 471 yards and 4 touchdowns, including a 61-yard touchdown pass to Justin Jefferson to ice the game.

Next on their top-10 rampage would be the No. 7 Florida Gators. For one of the few times this season, LSU found themselves behind early in the game, trailing 28-21 in the second half, but came back to win by two touchdowns.

The Tigers took this opportunity to establish their championship defense, forcing three straight three-and-outs, picking off Florida in the end zone and getting a fourth down, goal-line stop as the LSU offense reclaimed the lead and never looked back.

In the middle of a record-setting season for LSU’s offense, the Tigers’ defense saved the day against Auburn, holding them to just 287 yards and making big plays when the team needed them most.

Auburn brought QB Joe Burrow back down to earth (A still exceptional 321 yards with one TD and one interception), but LSU’s defense held strong.

Clyde Edwards-Helaire established himself as LSU’s best rusher as well. The junior ran 26 times for 136 yards and a touchdown, bringing balance to the team’s pass-heavy attack.

This is the game every Tigers’ fan has circled on their calendar. This is also the game where several pundits began to believe LSU could win it all.

The Tiger’s beat the Crimson Tide in a 46-41 shootout. LSU led 33-13 at the half, the biggest deficit Coach Nick Saban has ever faced at Alabama. Despite their late comeback, LSU’s defense held strong, getting pressure on Tua Tagolvailoa and coming up big when needed.

Joe Burrow answered two of Alabama’s second-half touchdowns by leading the Tigers down the field for scores of their own. He made big third-down plays, including two huge runs.

LSU needed to play a nearly perfect game to beat Alabama on the road, and they did.

Could this LSU team be the best ever? 'I think so,' says Coach Orgeron

The College Football Playoffs started early for LSU, as the then-No. 2 Tigers took on the No. 4 Georgia Bulldogs in the SEC Championship. It wasn’t as lopsided as the Oklahoma game (we’ll get to that soon), but it wasn’t pretty for the “dawgs.”

LSU scored fast and often, beating the Bulldogs 10-37 to claim the SEC Title and knock Georgia out of title contention. Burrow threw for 349 yards and four touchdowns and put the cherry on top of his Heisman campaign with THIS scrambling 71-yard pass:

LSU’s defense gave up less than 3 yards per play, in large part thanks to freshman DB Derek Stingley Jr. who caught two interceptions and locked down Georgia’s receivers all night.

LSU was a heavy favorite going into their semi-finals matchup with the Sooners, but no one saw THIS coming.

LSU’s offense rewrote the record books in a 63-28 blood bath against Oklahoma.

Who knows what would have happened if LSU hadn’t benched QB Joe Burrow for most of the second half. Everything went LSU’s way. As far as confidence building games go, it doesn’t get much better than this one.

This Clemson team was in the conversation for the greatest team in college football history... until they ran into the buzzsaw that is the LSU Tigers.

Clemson came out strong against the Tigers in the Championship game, but once LSU got their feet under them there was no looking back.

RELATED: Coach O's high school forms giant 'O' on the field he used to play on

LSU dominated award season, bringing home the Heisman Trophy, Coach of the Year and so many more.

Burrow wrapped up arguably the best individual season in the history of the sport with a championship win and went from NFL after thought to possible No. 1 overall pick.

The Heisman Trophy winner threw for 60 touchdowns this season (including his 4 TDs in the championship), an all-time NCAA record.

He’s officially the most accurate passer in college football history. He’s completed no less than 70 percent of his passes against every single game this season and maintains that mark against the blitz, under pressure and against any style of coverage.

And those stats have been LIMITED by how successful LSU has been. Winning games by an average margin of 27.2 points means there’s a lot of garbage time in the end. Backup QB Myles Brennan even closed out a BOWL GAME that was out of reach by the start of the second half. Who knows how high these numbers would be if LSU never took their foot off the gas.

The Tigers are expected to send plenty of players to the draft this year. Between their elite receivers, nation-best offensive line, uber-talented defense and potential No. 1 overall pick QB, the team is expected to have around five players go in the first round and more soon after.

What hasn’t been said about Joe Burrow already? The Heisman winner will likely go No. 1 overall to the Cincinnati Bengals, who seem ready to move on from former first-round pick Andy Dalton.

The nation’s best defensive back (Jim Thorpe Award) has 59 tackles and two interceptions this season. This is his second year as an All-American.

Chaisson is LSU’s leading pass rusher with 6.5 sacks and 13.5 tackles for a loss, even after missing two games. The redshirt sophomore is a defensive captain for LSU and earned first-team All-SEC honors this season.

Fulton is a lockdown corner that’s been on the NFL’s radar for awhile. He has 13 passes defensed this season to go with one interception. He could have been a high pick last year, but stayed for another season after missing the end of the 2018 season with an injury.

18. Justin Jefferson has 18 touchdowns this season. That’s along with 102 catches and 1,434 yards. His numbers have skyrocketed this season after catching 54 passes for 875 yards and six TDs as a sophomore and his development won’t end there.

LSU’s leading rusher may not be get the attention Leonard Fournette did, but Clyde Edwards-Helaire has run for 1,304 yards and 16 touchdowns this season. He’s also caught 50 catches for 399 yards. He may be short for a running back, but Edwards-Helaire uses his 5’8, 209 lbs. frame like a canon ball and has proven he can do it all.

Wide receiver Ja’Marr Chase and cornerback Derek Stingley Jr. will be drawing a lot of draft attention as well, but they won’t be eligible to play in the NFL yet.