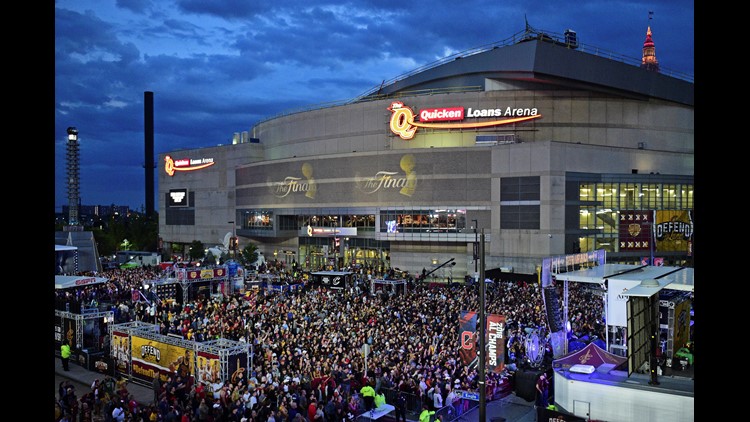 Cleveland Cavaliers fans stand during a watch party outside Quicken Loans Arena during Game 4 of the basketball's NBA Finals between the Cavaliers and the Golden State Warriors, Friday, June 9, 2017, in Cleveland. (AP Photo/David Dermer)

CLEVELAND (AP) — The massive makeover of Quicken Loans Arena will include a new name.

The Cavaliers' downtown home will be renamed Rocket Mortgage FieldHouse, a person familiar with the decision told The Associated Press on Monday night. The announcement of the change will be made Tuesday at a news conference, said the person who spoke on condition of anonymity because the team is not revealing the nature of the media gathering.

The Cavs sent out an advisory about a "major announcement" and said owner Dan Gilbert and Cleveland Mayor Frank Jackson and general manager Koby Altman would be among those in attendance.

Best known as "The Q," the 19,000-seat arena, which hosted the Republican National Convention in 2016, was previously known as Gund Arena before Gilbert bought the building and team for $375 million from Gordon Gund in 2005.

The building has been undergoing a $185 million renovation over the past few months and it set to be completed this fall. The project, which was financed by the Cavs, will give the building a sleek, new glass facade and more than 42,000 square feet of public space.

The Cavs play their season finale on Tuesday against Charlotte.