Bryson knows his way around the hardwood, but it was out on the basketball court that his life changed in an instant. 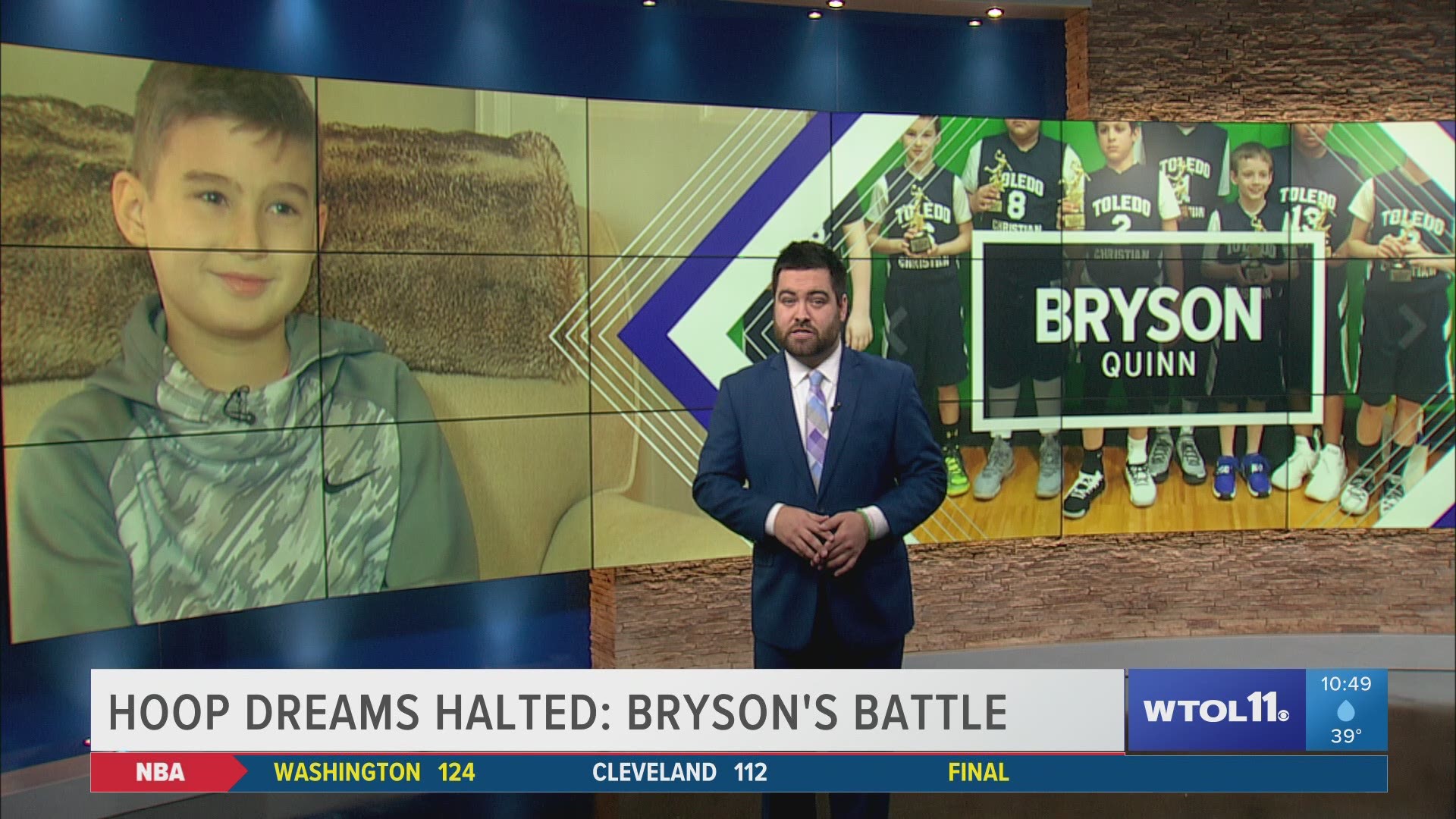 TOLEDO, Ohio — Sometimes life has a way of slowing you down in your tracks when you least expect it. That is certainly the case for one happy and seemingly healthy sixth grader at Toledo Christian.

Bryson Quinn is very much your normal 11-year-old kid. He loves sports, he does extremely well in school, and he loves music. But on a late-December night on the basketball court, all of that was put on hold.

Bryson knows his way around the hardwood, but it was out on the basketball court that his life changed in an instant. It was the Thursday before Christmas break. As his team was practicing, his Dad noticed something a little out of the ordinary. The timeline of events that happens next is nothing short of incredible.

"A doctor friend of ours was there and he wasn't planning to be there because he worked all day," said Jason Quinn, Bryson's father.

A few of my partners were gone so it was really busy here and I was trying to catch up on paperwork," said Doctor Robert Marc Donawa. "I was going to stay until practice was over and just go pick my son Eli up, who plays with Bryson. I said, 'Well, I haven't watched a lot of practices, I'll just pack it up early and go.'"

Jason said, "'Dr. Donawa, take a look at this, is this normal?' He did some tests and looking, and said 'That was not normal. It should not be that way.'"

"I looked in his mouth and I felt around and I could feel a really big lymph node right over his left collarbone," said Donawa.

"He looked at it. He said that we should go get it checked out," said Bryson.

"The next morning we met at his pediatrician, and then that night we were literally at Nationwide Children's Hospital in Columbus," said Bryson's dad.

In a 24-hour span, just days before Christmas, the Quinn family had their life put on hold. Bryson was quickly diagnosed with Lymphoma. They began chemo treatments almost immediately.

"I woke up that morning thinking I had four healthy children," said Nicole Quinn, Bryson's mother. "That night I couldn't sleep thinking I didn't know if my son would stay alive because I knew his airway was getting closed. It was scary."

Getting the news that a loved one has cancer is never something you’re ready for. But now, Bryson would have to be ready to fight.

When asked if anything scared him, Bryson said, "Sometimes it gets scary not knowing what's going to happen, but I try to just go with the flow."

The good news is that after just three treatments, they saw some improvement.

Looking at the x-ray's, Dr. Donawa explained that after just a few a few rounds of chemotherapy, the mass shrunk significantly.

Through all of this in the last month, the Quinn’s have kept an incredibly positive attitude. They’ve leaned on friends, family, and their faith.

"We've been blessed with an amazing community around us," said Bryson's dad. "It starts that first night when we were at basketball practice with our doctor friend being there, and that's not just by chance or luck. We believe that everything happens for a reason. That's God, he had our friend there that's a doctor to push me in the right direction to get the ball rolling. Where 24 hours later we're at a hospital with all these people around us, and around our son, watching over him and taking care of things."

Bryson has already proven he is a fighter on the basketball court, now he’s going to show all of us how tough he can be off the court as well.