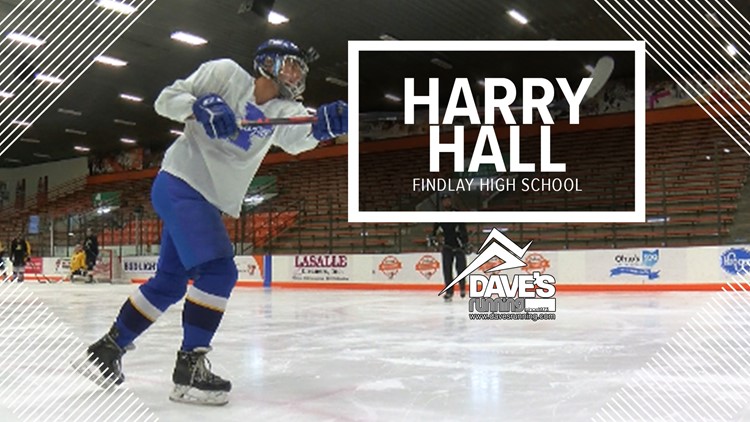 FINDLAY, Ohio — It's been quite the week for Harry Hall of Findlay High School. A couple days ago he scored a highlight reel goal in the Trojans win against Springboro.

He then saw that goal make it to SportsCenter's Top 10 plays, and now, he finds himself as our Athlete of the Week.

Back in 1996, Mike Legg at the University of Michigan made this goal famous. Scooping up the puck behind the net and wrapping it around. Kids have been trying to replicate that move every year since.

Harry Hall at Findlay is no different.

He's been playing around with the move in practice and he's now successfully pulled it off in a game. A few days ago playing against Springboro down in Dayton, with no one on him, he scooped up the puck and buried a goal for the Trojans.

"I've seen it so many times online with Instagram," Hall said. "Basically, I practice it all the time. The opportunity was there so I took it and I ended up tucking it."

The goal quickly picked up momentum on social media. His brother, Patrick, tweeted it out and eventually it made it's way to SportsCenter's Top Ten Plays.

"That was insane," said Hall. "I actually woke up for early morning practice and checked my phone. A couple buddies were like 'you're on ESPN.' 'No I'm not, shut up.' I turned it on, number three. I was like 'that's incredible.' It was an honor, something I won't ever get to do again, so it was super special."

This actually isn't the first time Hall has pulled off this move in a game. He scored the exact same goal against Northview last year, but this one is a little extra special with all of the national attention it's received, and he's been able to share the experience with his teammates.

"It was super special," said Hall. "I got the opportunity and just to have my boys out there with me and my linemates, that was pretty cool to celebrate with them after it."