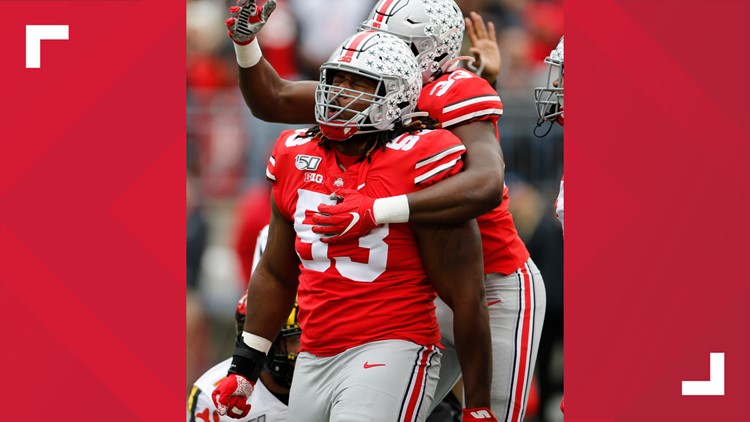 COLUMBUS, Ohio — Justin Fields threw for three touchdowns and ran for another in the first half Saturday, and No. 3 Ohio State hardly missed suspended defensive star Chase Young in a 73-14 romp over Maryland.

A team that gave the Buckeyes (9-0, 6-0 Big Ten, CFP No. 1) headaches last season was no trouble this time, even without the fierce pass rushing of Young. The preseason All-American was suspended Friday while Ohio State investigates a possible NCAA violation involving a loan.

J.K. Dobbins rushed for 90 yards and two touchdowns as the Buckeyes built a 42-0 halftime lead and the backups added to it in the second half.

Fields tossed touchdown passes to Binjimen Victor, K.J. Hill and Chris Olave before taking a seat in the second half. His backup, Chris Chugunov threw another one in the third quarter. Ohio State piled up 705 yards of offense and 40 first downs.

The Buckeyes defense, without Young, held the Terrapins to a single yard of offense in the first quarter and 139 yards for the game. Anthony McFarland, who rushed for 298 yards against the Buckeyes last season, managed only 7 yards on six carries.

Maryland quarterback Josh Jackson left after the first quarter and didn't return until the third. He was spelled by Tyrrell Pigrome, but neither was particularly effective. Jackson finally got the Terps on the board in the third quarter with a 26-yard touchdown pass to Dontay Demus, a drive set up by three consecutive 15-yard penalties against Ohio State.

Maryland: The body language of the Terrapins players was bad from the beginning, and they never seemed to give themselves a chance. After starting strong under new coach Mike Locksley this season, Maryland has fallen apart, losing seven of its last eight. After falling to Ohio State by a single point in overtime last year, the Terps took a big step backward.

Ohio State: The train keeps rolling, with the next big test in two weeks against Penn State, which was upset by Minnesota on Saturday. The Maryland game was another methodical dismantling that has become Ohio State's signature this season.

Maryland: After an off week, hosts Nebraska on Nov. 23.

Ohio State: At Rutgers next Saturday.

RELATED: Ohio State DE Chase Young will not play against Maryland due to 'possible NCAA issue'