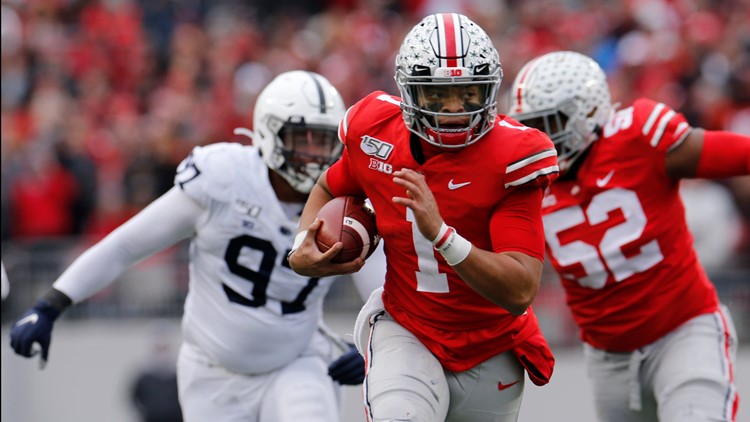 Photo by: AP
Ohio State quarterback Justin Fields, center, runs for a first down against Penn State during the first half of an NCAA college football game Saturday, Nov. 23, 2019, in Columbus, Ohio. (AP Photo/Jay LaPrete)

Ohio State jumped LSU to No. 1 in the College Football Playoff rankings with two weeks left to go before selection Sunday.

LSU slipped to second Tuesday night and Clemson remained No. 3 while Georgia held on at four. If playoff history holds form, three of those top four teams will reach the semifinals.

Alabama remained No. 5 in the selection committee's third rankings, with Utah moving up a spot to No. 6. The Utes are the only Pac-12 team in the top 10 after Oregon dropped eight spots to 14th.

Oklahoma is seventh followed by Minnesota, Baylor and Penn State.

In each of the first five years of the playoff, three of the top four teams in the rankings heading into rivalry weekend reached the semifinals, including the No. 1 team every time.

WATCH | Jim Donovan and Dave "Dino" DeNatale have thoughts on the Buckeyes heading into Saturday's showdown with Michigan on Tuesday's Donovan & Dino: