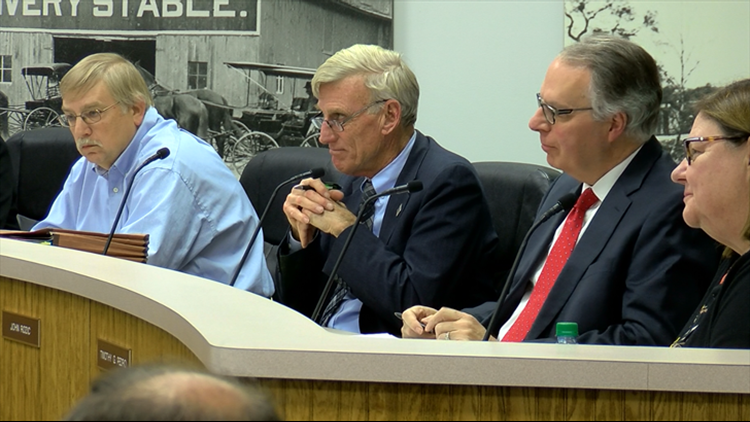 Waterville City Council held its first meeting since the passage of their Community Bill of Rights. During Monday's meeting, the law director gave an update on where the process of the proposed NEXUS pipeline stands before packed council chambers.
Author:
Published: 4:00 AM EST November 15, 2016
Updated: 11:10 PM EDT August 12, 2018

WATERVILLE, OH (WTOL) - Waterville City Council held its first meeting since the passage of their Community Bill of Rights.

During Monday's meeting, the law director gave an update on where the process of the proposed NEXUS pipeline stands before packed council chambers.

According to the city, they have sent a letter to NEXUS saying they now have a law preventing them from building the pipeline.

The Community Bill of Rights that passed on Election Day allows the city charter to be changed so that it keeps natural gas infrastructure from being built within the city limits.

The city is hoping this will stop NEXUS's natural gas pipeline from being built in their town.

They also plan to work with an expert from the Community Environmental Legal Defense Fund to take this process to the next level.

The president of Protecting Air for Waterville or PAW says this will likely go to court.

"When you look at NEXUS, they're not going to go away, but we aren't either. So we will fight this and now turn it over to Mr. Lodge and the city law director and they will take it to the next level," said Dave Bourland with PAW.

The city is also waiting on the Lucas County Board of Elections to certify the ballot. The Community Bill of Rights passed 60 to 40.

We reached out to Nexus for a comment. They issued a statement that says in part...

"NEXUS is a federally-regulated interstate natural gas pipeline, and the Federal Energy Regulatory Commission has exclusive jurisdiction to approve the route of the project. Therefore, the ballot initiative is not expected to affect NEXUS's route nor timeline. NEXUS remains on track to receive its Final Environmental Impact Statement from FERC on Nov. 30, 2016 and its FERC Certificate in the first quarter of 2017."