Fewer drivers in 2020 made for less congestion on the roads, which could be one reason Ohio saw an increase in speed, according to the Ohio State Highway Patrol. 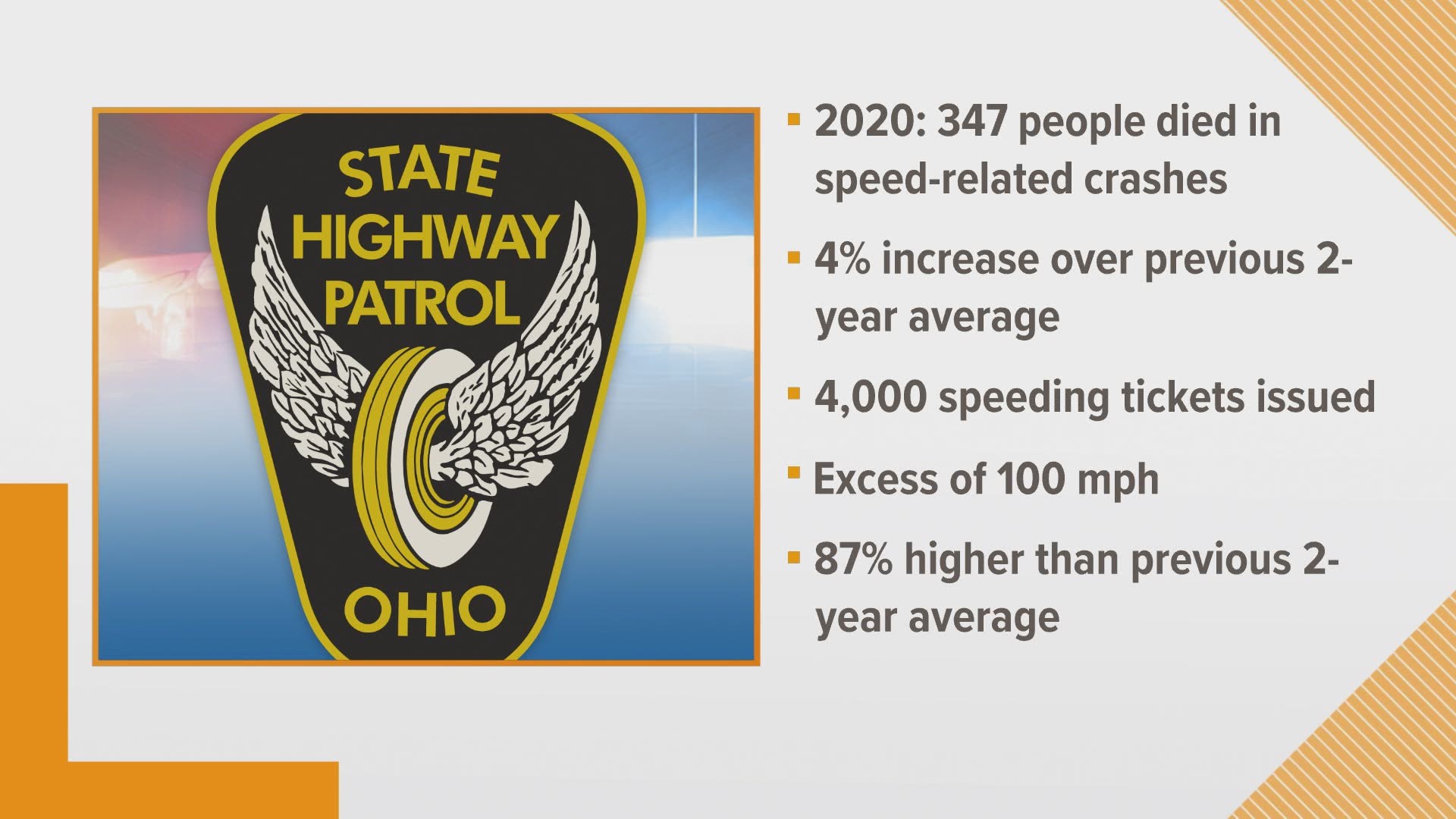 COLUMBUS, Ohio — A difference of just 10 mph at the time of impact could determine whether someone survives a crash, according to a recent AAA study.

The study, performed by AAA in collaboration with the Insurance Institute for Highway Safety and Humanetics, conducted crash tests at impact speeds of 40, 50 and 56 mph.

“At 40 mph there was relatively low risk of injury, minimal structural damage to the vehicle,” said Kimberly Schwind, AAA spokesperson. “But when you go to 50 mph, even 10 mph more, your crash risk significantly increases and we saw significantly more damage to the vehicle. And at 50 mph, your chances of neck injuries, head injuries, brain damage, even possible death dramatically increases.”

It is no secret that the State of Ohio saw a dip in traffic on the roads in 2020 as a result of the pandemic.

Traffic was down about 15 percent for the year, according to the Ohio Department of Transportation (ODOT). But despite fewer people on the roads across Ohio in 2020, the state saw a seven percent increase in traffic deaths compared to 2019.

Fewer drivers made for less congestion on the roads, which could be one reason Ohio saw an increase in speed, said Staff Lt. Craig Cvetan, spokesperson for the Ohio State Highway Patrol (OSHP).

“Certainly, with less people on the roadways, there’s a tendency for people to start increasing their speeds because the roadways open back up,” Lt. Cvetan said. “But you know, now that we’re getting up more to normal traffic patterns, we would expect those speeds to start decreasing, but we’re not seeing that – you know, we’re continuing to stop people for speeds in excess of 20 mph over the speed limit and speeds 100 mph+ and that’s very dangerous.”

In 2020, OSHP issued nearly 4,000 speeding tickets in excess of 100 mph, which is an increase of 87 percent from the previous two-year average.

2020 also saw 347 deaths as a result of speed-related crashes; a 4 percent increase in speed-related deaths compared to the previous two-year average, according to OSHP provisional data.

“Auto manufacturers have made great strides in the safety of vehicles. They’ve incorporated air bags, different restraining systems, technology to strengthen the vehicle and provide you a safe environment to travel in, but that technology has limitations,” Cvetan said. “And when you start to, especially se those speeds of 100 mph+, the effectiveness of those are significantly decreased and your chances of being significantly injured or killed in a crash go way up.”