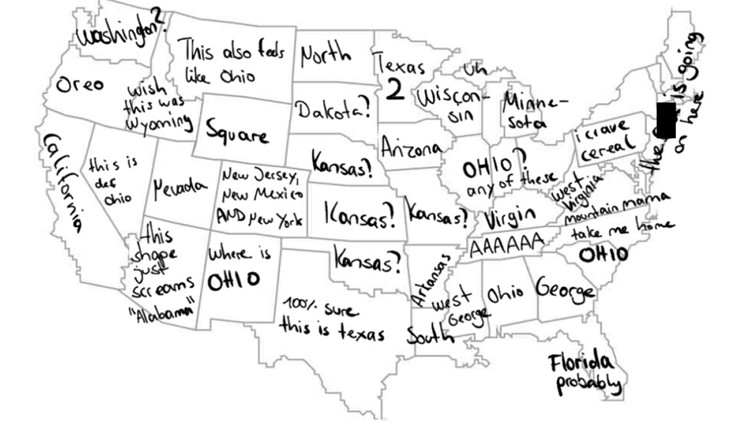 'Where is Ohio' trends on Twitter, and we have more questions than answers

TOLEDO, Ohio — A viral tweet sent by a German Twitter account Friday put the state of Ohio back on the map — well, all over it, actually.

In the post, an account using the name "Felix" attempts to name all states in the continental U.S. and things quickly go haywire.

A few gems on the country's enhanced map include George, Mountain Mama, Oreo, West George and one exasperated "AAAAAA" in Tennessee — tough break.

The account then takes a shot in the dark and picks a few points on the map to be dubbed as the great Buckeye State before finally just scribbling, "Where is OHIO" on New Mexico.

"Where is Ohio" quickly climbed the ranks of Friday's Twitter trends, and Ohioans had some questions of their own.

Some went the more existential route:

Others like Dom saw it as a way for the state to finally get around to starting its hostile takeover:

And, a few folks took the state's 15 minutes of fame to shout out the cool things that happen in Ohio, too:

To be fair, Ohio wasn't the only state to get some clout from the exchange. "Texas 2" eventually shot up on the afternoon's top trends, sending Twitter through another meme-able tailspin.

At this time, it is unclear when or if the new map will be added to our country's textbooks. But, it is sure to stick in our minds until another viral tweet comes along.

RELATED: Purrr-fect: Here are the best animal stories from 2019

RELATED: Peloton actress weighs in on ad's controversy: 'Honestly, I think it was my face'