88 Counties: Wood County's Muslim community has grown over the years as part of the fabric of the region

The time after 9/11 was one filled with high tensions, and talking to Muslims in Wood County shows how the greater community banded together. 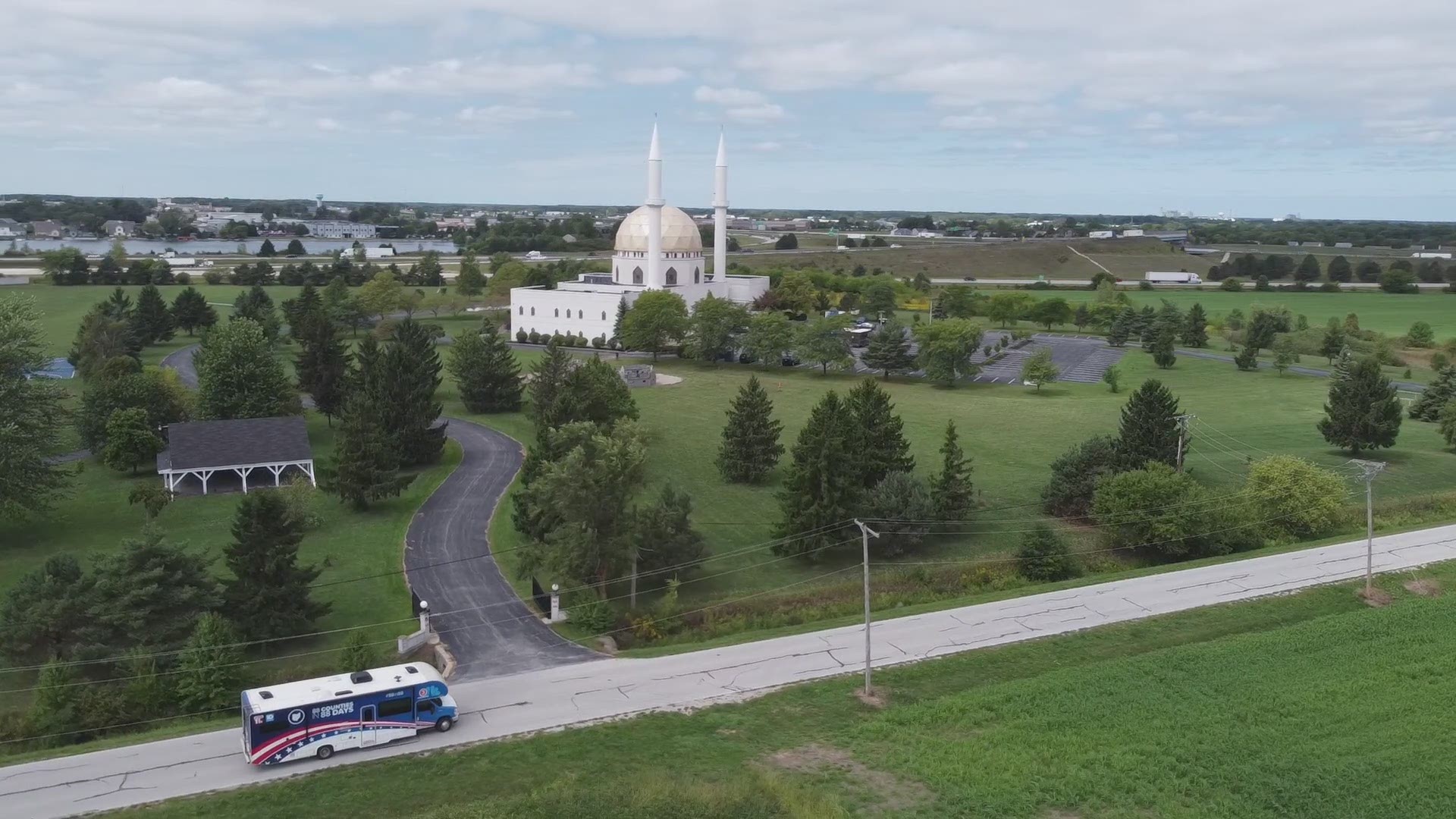 PERRYSBURG, Ohio — As the RV continues to roll through Ohio, our 88 Counties in 88 Days feature takes you to Wood County where we're highlighting the Muslim community there.

It's one that started off small but has grown over the years.

The time of 9/11 was one filled with high tensions, and talking to Muslims in Wood County shows how the community banded together to honor those who lost their lives, and how the greater community united to show support for the mosque at the Islamic Center of Greater Toledo.

Here are stories from those in the community:

Credit: WTOL
Hana El Nemr describes the sense of community she feels as a Muslim in Perrysburg and Wood County.

"The mosque is like a second home, the people here are like a second family – they’re my brothers they’re my sisters.  When we migrated here to Perrysburg it felt it did truly feel like home, there was a sense of community," said Hana El Nemr.

Credit: WTOL
Ahmad Taouil, president of the Islamic Center of Greater Toledo, notes the proximity of the larger Muslim centers of Detroit and Dearborn as a draw to the Wood County community.

"There’s a lot of, quite a few Muslims in the Toledo area.  A lot of it is the nearness to Detroit and Dearborn which has the highest concentration of Muslims," said Ahmad Taouil, president of the Islamic Center of Greater Toledo. "This community grew from one center where we originated in Toledo on Bancroft and to, I think right now, the count is 11 different Muslim Centers in the area."

Credit: WTOL
Imam Ahmad Deeb said he has had people visit the mosque at the Islamic Center of Greater Toledo with many questions, or even fears about Islam, which he works to answer and allay.

"No, I do tours all the time and the first thing I say is, 'You’re scared; no problem. I totally understand it. It’s not even your fault,'" said Imam Ahmad Deeb. "And we had a situation where a person came and they were just like in tears towards the end. 'Cause they were just like, 'I used to be terrified of this place and then I came inside and realized all of it was irrational. '

Deeb shows off the highlights of the inside of the mosque to visitors. "At the top, these are God's attributes; the most merciful, the most loving, the majestic.  And then you have these beautiful stained glass windows."

When the RV visited the Islamic Center of Greater Toledo, it was on Sept. 11, the 19th anniversary of the attacks on the World Trade Center and the Pentagon. At the mosque, this anniversary is remembered for the terrible toll the attacks had America that day and the American Muslim community as well.

"The flags flown at half-staff, we do that each year in commemoration of 9/11," said Taouil. "There’s always been a security concern just for the high tensions that came right after 9/11.  Fortunately we have a great community and we really bonded."

Credit: WTOL
M. Razi Rafeeq, former president of the Islamic Center of Greater Toledo and current board of trustees member, recalls the unity that was shown at the mosque when members of the community came out to show support for Muslim Americans after Sept. 11, 2001.

In the aftermath of that day of terror and destruction, members of the Wood County community and beyond created some common ground, reaching out so the Islamic Center of Greater Toledo could feel their support.

"One day after 9/11, we had a radio station, a local radio station, reached out to us, and said you know we know we understand what you and your community is going through," recalled M. Razi Rafeeq, former president of the Islamic Center of Greater Toledo and current board of trustees member. "(They said) we would like to have a gathering at the Islamic Center. There were enough people that could go around the entire building holding hands and prayed.  And basically, the message was there’s no one who could harm this community. That was a moment that I think people who were here physically in person at that time will never forget."

Credit: WTOL
After Sept. 11, 2001, community members - Muslim and non-Muslim - came out to stand in solidarity with the members of the Islamic Center of Greater Toledo.

The members of the Islamic Center of Greater Toledo are part of the fabric of Wood County, and they're proud to be here.

"We’re proud to be American Muslims, and we are part of this heritage, we’re part of this community, we are contributing in many many ways, and no one can ignore us," said Rafeeq.