Not only has the cancellation of the Pro Football Hall of Fame’s game and enshrinement week cost Stark County millions, it has broken a family tradition for many. 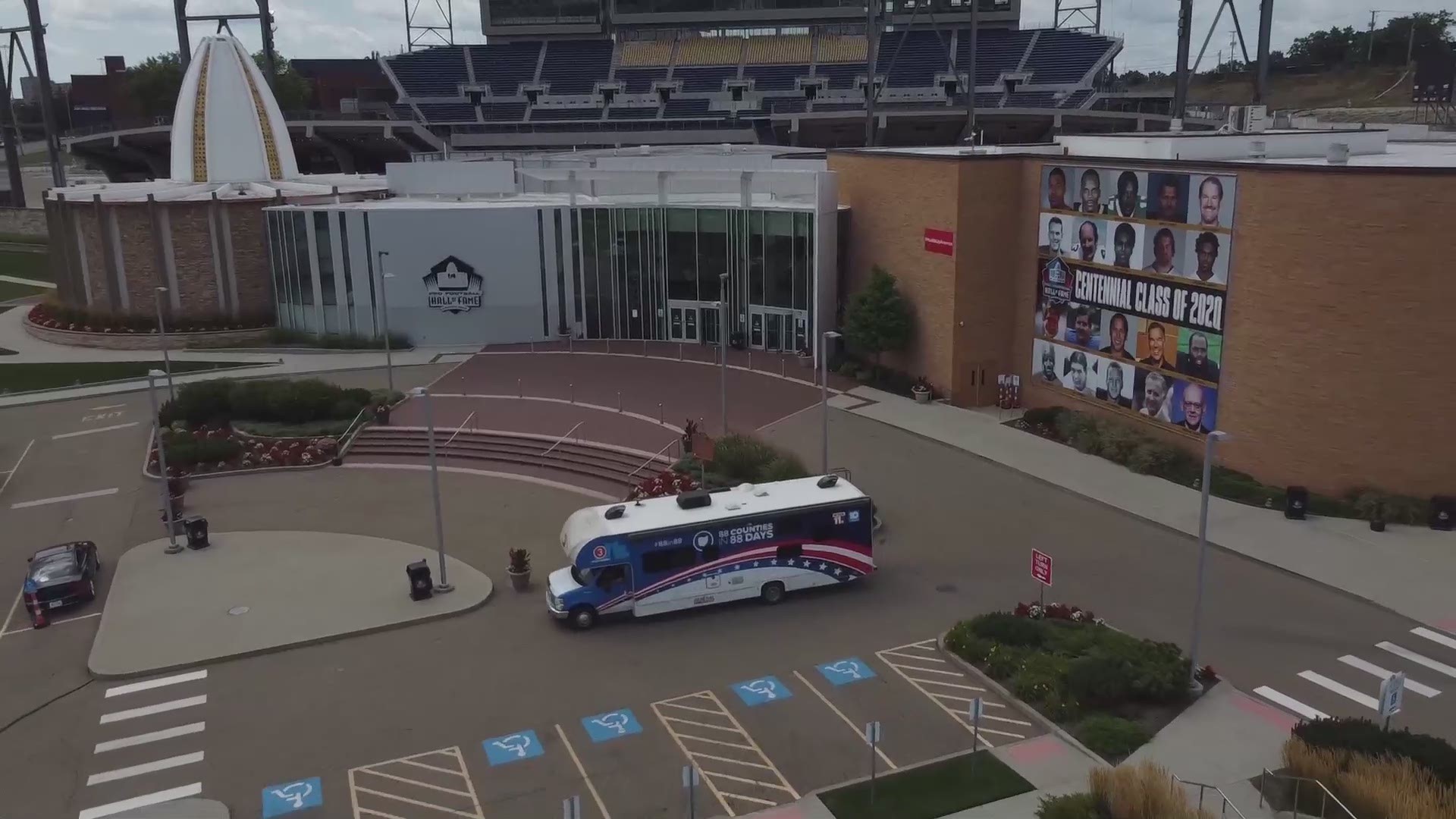 CANTON, Ohio — This content is part of our 88 Counties in 88 Days coverage, which focuses on the current issues Ohioans are facing in this election year.

The I-77 corridor through Stark County has long been a touchstone for political trends and life in middle American. And once known for its manufacturing base centered around Canton, it has lost tens of thousands of jobs in recent decades.

That’s one reason some leaders and businesses have looked to the Pro Football Hall of Fame – and related development – to help boost the county’s economy, which is a mix of manufacturing, retail and agriculture.

But development around the Pro Football Hall of Fame – which officials hope someday includes a water park, a youth sports complex, a retail promenade and convention space, among other amenities – has been slowed by planning and budget issues.

“Of course, we like the Hall of Fame because it brings people to the area, especially out of town people,” Brandon Makridies, who manages Woody’s Root Beer Stand, which is within walking distance of the museum. “Especially Steelers fans. It’s a tradition, they stop here and then walk up to the game.”

Fortunately for Woody’s, its origins run deeper than the Pro Football Hall of Fame’s. In business some 70 years, its roots have proven to be the stand’s saving grace in a pandemic.

“Due to so many businesses being closed and craziness of it all, the game will be missed and hopefully next year families can go back to what they normally do, but this year we have been fortunate with so many places closed we have stayed busy through it all,” Makridies said.

“I think it was relief for people cooped up in their homes for so long,” Makridies said. “Our business model has allowed us to keep serving people as we have done for the last forty years.”

Others, like a local antique shop owner, have not been so fortunate during the pandemic.

“When we first opened, we got a lot of returned customers and we did okay,” Jon Miller, the owner of Antique Treasures. “But then the business just died. Antiques are a luxury item; they are not like food.”

Not only has the cancellation of the Pro Football Hall of Fame’s game and enshrinement week cost Stark County millions, it has broken a family tradition for some locals.

“We were at the very first Hall of Fame game,” said Karen Kaufman, a long-time fan and volunteer. “And it’s just a big part of our lives. Our kids got involved in the parade and other events. We miss all of the things not happening this weekend.”

Her husband, Richard Kaufman, still volunteers at the Pro Football Hall of Fame.

“It’s tough,” he said. “It’s just a fraction of itself right now. I volunteered yesterday and there was maybe 12 people during my two-hour shift. I know it’s tough on business all over here, it really is.”

David Baker, President of the Pro Football Hall of Fame, recently said, “Our businesses, our region, our city, they are going to be more ready for this next year more than we are frankly right now.”

On a recent afternoon, the Pro Football Hall of Fame’s parking had dozens of cars, many with out-of-state license plates. Officials said they are also seeing more RVs in the lot, a sign that people are still traveling.