Authorities confirm person of interest as Nashville bomber, say he died at the scene

Nashville Fire responded to the blast linked to a vehicle on Second Avenue North early Friday. The site is in the city's entertainment district. 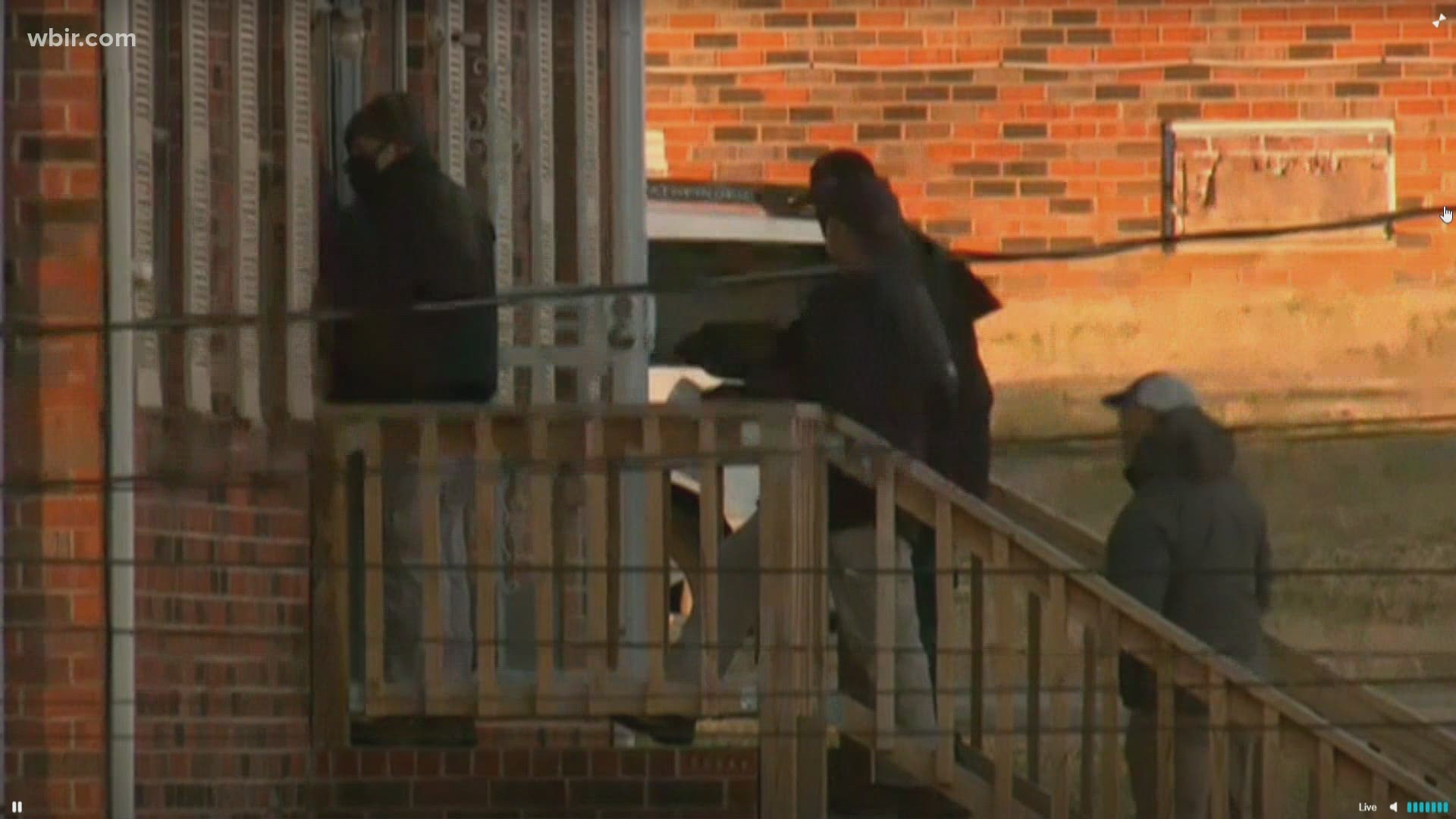 Officials said that Anthony Quinn Warner, 63, of Antioch, Tennessee was confirmed as the bomber and that he died in the bombing.

Officials said that DNA testing was conducted on tissue that was found at the scene. They said that there was no indication that any other person was involved in the bombing, after reviewing footage and evidence gathered after days of investigating efforts.

The Alcohol, Tobacco and Firearms Bureau said that they provided several resources to examine evidence and assist with other agencies, including the Federal Bureau of Investigation and Metro Police.

"There is no indication that anyone else was involved in this crime," officials said. "There are no known threats against this city."

A new curfew was announced around the area of the explosion during a press conference.

Officials did not indicate any motives for the bombing. They said they are interviewing individuals who were known to the suspect to learn more about what may have motivated him.

Officials said that for the event to be considered an act of domestic terrorism, it would have to be tied to a specific ideology. They are still working to determine the motive and did not give any additional details.

Around 11 p.m. Sunday, the FBI released a photo of Warner. Anyone who recognizes him asked to call 1-800-CALL-FBI or submit tips online. They said they are seeking information about him.

According to the Associated Press, federal investigators have identified a person of interest in the Christmas Day explosion in Nashville. They said that they were searching the home of Anthony Quinn Warner, 63, of Antioch, Tennessee.

According to reports, officials were working to determine whether Warner was responsible for the explosion in Nashville that damaged 41 buildings and injured at least three people.

The FBI, ATF, Metro Police, and the mayor gave an update on the explosion in downtown Nashville on Saturday afternoon. While no arrests have been made, authorities said they have received more than 500 tips. The FBI also confirmed that they were investigating in Antioch, according to officials.

“I am confident that we have the team to get to the bottom of this," US Attorney Don Cochran said.

“Nashville is safe and that there are no known threats at this time,” Metro Police Chief John Drake said.

The Associated Press and WSMV-TV reported Friday night that human remains have been found near the downtown Nashville site of an "intentional" morning explosion.

Metro Police Chief John Drake told reporters at a press conference that they found some tissue that they are investigating as human remains near the scene.

It's not clear how the remains are related to the explosion or whether they might belong to the person believed to be responsible or a victim, according to the AP, citing two unnamed law enforcement officials.

Federal and local authorities have vowed to catch whoever set off Friday morning's explosion on Second Avenue, a popular bar and entertainment area. The explosion caused heavy damage to surrounding buildings and cars.

Speaking to the press Friday night Mayor John Cooper said at least 40 buildings had been damaged.

Drake says they have found tissues that could be remains. He says if someone was inside the RV they’d have no idea right now since it was such a larger explosion. #WBIR

Security cameras were being checked to see if they showed who might have been responsible for the 6:30 a.m. explosion in a parked RV.

Metro Nashville police on Friday afternoon released a photo of the RV captured before the explosion. Someone parked it on the street at 1:22 a.m., and the explosion came about five hours later, police said.

"There were announcements coming from the RV," Metro Nashville spokesman Don Aaron said. "That’s the extent of what we can say at this point."

MNPD Chief Drake says there was a countdown coming from the area before the explosion. It would come on and go off continuously. #WBIR

TMZ published a video taken before the blast from a building on the street in which a recorded voice could be heard on a loudspeaker saying repeatedly, "If you can hear this message, evacuate now."

The downtown explosion had ramifications for air travel Friday. Flights out of the Nashville airport off Interstate 40 and Donelson Pike were halted for a time because of telecommunications issues associated with the blast.

Authorities said they were checking a report of shots fired Friday morning when they saw the vehicle, heard the warnings and became suspicious. They cleared the area and the blast went off.

Some residents in the area evacuated to Nissan Stadium across the river. 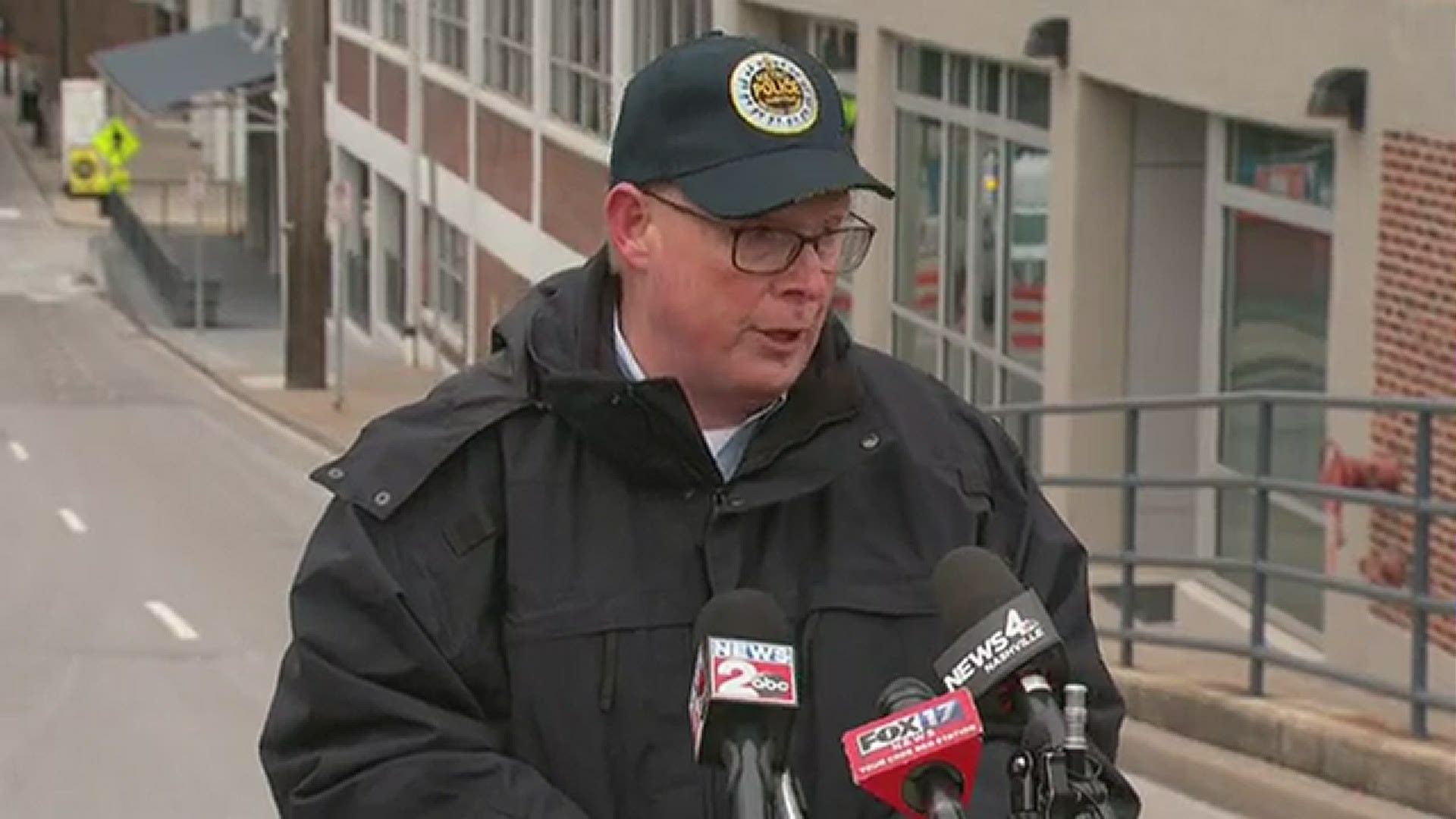 Cooper says police will be on scene for several days as they investigate. Three people are in stable condition in the hospital tonight. #WBIR

One Nashville police officer was knocked to the ground when the blast occurred, Aaron said.

"We need your leads, we need your help," an FBI agent said Friday afternoon.

The FBI was taking the lead in the investigation. The Bureau of Alcohol, Tobacco, Firearms and Explosives and the TBI also were participating.

The Department of Justice pledged to devote full resources to the investigation.

The FBI was encouraging anyone who knew what happened to leave tips here.

Nashville Fire confirmed three people were transported to the hospital.

“President Trump has been briefed on the explosion in Nashville, Tennessee, and will continue to receive regular updates," the White House said late Friday morning. "The president is grateful for the incredible first responders and praying for those who were injured.”

DEVELOPING: TBI has Agents and an Accelerant Detection K9 assisting in the efforts to investigate this morning’s explosion in downtown #Nashville.

As the situation continues to develop, we stand prepared to assist the @FBI as it leads the investigation. pic.twitter.com/lYv6oJVkPb

Cooper toured the area. He said many had blown out windows. Some storefronts were destroyed. There were some broken water mains as well, Cooper said.

He said he was grateful not many people were around when the explosion happened.

"We’re a famous place," he said. "People know where we are and if people want attention and publicity sometimes they think that they can come here to get it."

The mayor said it would take authorities awhile to inspect the buildings and clean up the debris Friday.

Gov. Bill Lee said the state would supply "all resources" needed to help in the investigation.

We will supply all of the resources needed to determine what happened and who was responsible. Please join @MariaLeeTN and me in praying for those who were injured and we thank all of our first responders who acted so quickly this morning.

Although police kept onlookers at bay, photos from the scene showed damaged storefronts along the normally busy Second Avenue.

MNPD, FBI & ATF investigating the 6:30 a.m. explosion on 2nd Ave N linked to a vehicle. This appears to have been an intentional act. Law enforcement is closing downtown streets as investigation continues. pic.twitter.com/YOfMTaKmTH

Black smoke and flames billowed from the area after the blast.

Please say a little prayer for anyone affected by this - ambulances lining Broadway and coming/going. I don’t know if the building/area was residential or commercial. We haven’t left our building. Whole area around downtown seems blocked off pic.twitter.com/GD0qaPLZOI

Smoke could be seen rising above the downtown Nashville skyline as people in the area reported feeling a large shaking when the blast hit.

This is a developing story and 10News will update it as we learn more.