One day after President Trump signed USMCA into law, he toured an auto supplier in Michigan, energizing a crowd of workers while talking about jobs and investments. 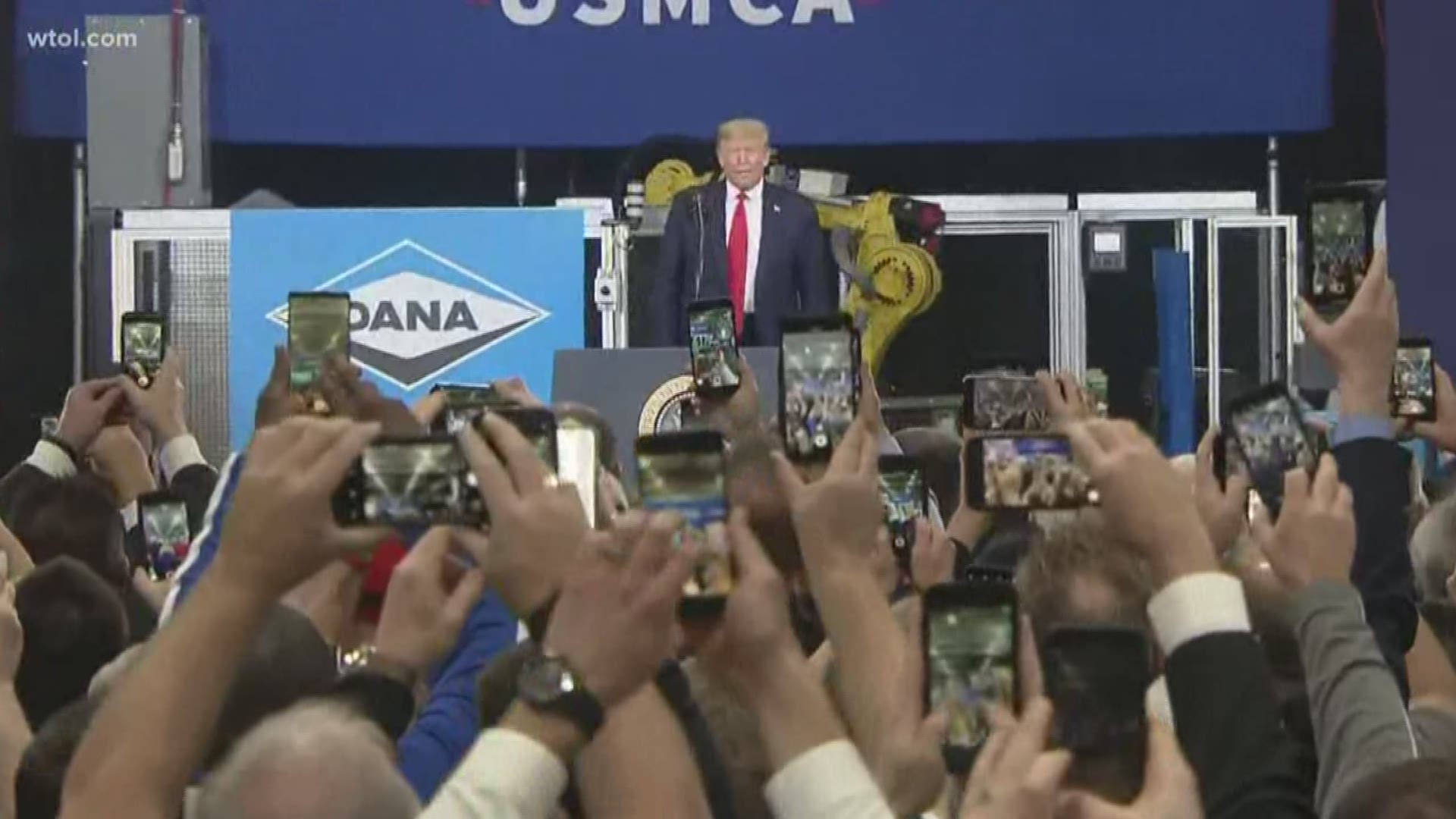 "I will say we just ended the nightmare known as NAFTA. They took our jobs for a long time. They took it for a long time and now we have a brand new U.S. Mexico Canada Agreement. It's a whole different ball game. It's gonna be great for this plant, it's gonna be incredible for Michigan," Trump said.

In the middle of signs that read "promises made, promises kept," Trump not only highlighted his victory in Macomb County in the 2016 election, where he won with an 11.5% margin but also gloated about the China deal he signed last week, another campaign promise.

Workers at the plant were expecting to hear about the USMCA that had just been signed the day before and were not disappointed by Trump's remarks, which focused mainly on trade policy and job creation.

"I'm assuming he will talk about the trade agreement and how it benefits the auto industry and farmers," Dana worker Daniel Thompson said before Trump arrived on the stage.

"I'm amazed, it's great. I can't believe and wait for what Dana has in store for us. All the money they are bringing in, more jobs. I'm happy for the future," Salvatore Nix, who works at Dana, said after the president's appearance.

Trump's speech, which lasted about 30 minutes, running shorter than usual, also centered around Midwest- and Ohio-specific issues. He made direct references to the Lima military tank plant, the auto industry and the Great Lakes.

"I was president-elect and they told me they were closing a plant in Lima, Ohio. And I said, 'What's the plant?' It makes tanks. I said, 'OK, really? Where else do we make it?' That's it. I said, 'I wanna build our military. And we want tanks, what do we do? Send over to China for them or something?'" Trump said amongst laughter from the crowd.

"I went to Lima, Ohio. I went there and I looked at this incredible plant. And the incredible workers," he added. "So, I turned down the closing of that plant just by instinct. And now, we're making hundreds of tanks a year. We were making none."

The president also added in his remarks that Fiat Chrysler, Ford and General Motors are investing billions of dollars and, together, are creating more than 10,000 new jobs in Michigan.

But that didn't come without criticism from the opposition. The Michigan Democratic Party called the president out for going to the state to "tell tales of economic success and promises kept."

"They see the side of our state that Donald Trump refuses to mention. The side he ignores because it tells an inconvenient story of promises made and promises broken. During his campaign, Donald Trump stood here in Warren and told us, 'if I'm elected, you won’t lose one plant.' Just last Friday, we learned Michigan lost 5,300 manufacturing jobs in the last year alone," Michigan Democratic Party Chair Lavora Barnes said.

Regarding the Great Lakes, the president vowed to work with Congressmembers representing Michigan, some of whom were at the plant, to protect it against Asian carp and other invasive species.

Trump also said the U.S. Army Corps of Engineers already had a plan in place.

Earlier this month, Republican and Democratic U.S. Representatives from Illinois, Ohio, Pennsylvania, New York, Wisconsin and Michigan sent a letter to the Assistant Secretary of the Army for Civil Works, Rickey "R.D." James, regarding the task force's priorities for the Great Lakes.

The measure came as the Army Corps of Engineers developed its fiscal year 2020 work plan.

Trump's promise to the Great Lakes was another remark that didn't go unnoticed by the Democrats in Michigan.

"He promised to protect clean water in Michigan but fights to allow pollution in our waterways. Michiganders need to stand against his attacks and elect a president who fights for everyday people," Democratic worker Tony Durkacs said through a press release.