The president delivered remarks at nearly 5:30 p.m. in Exhibit Halls 2-3 of the Austin Convention Center. 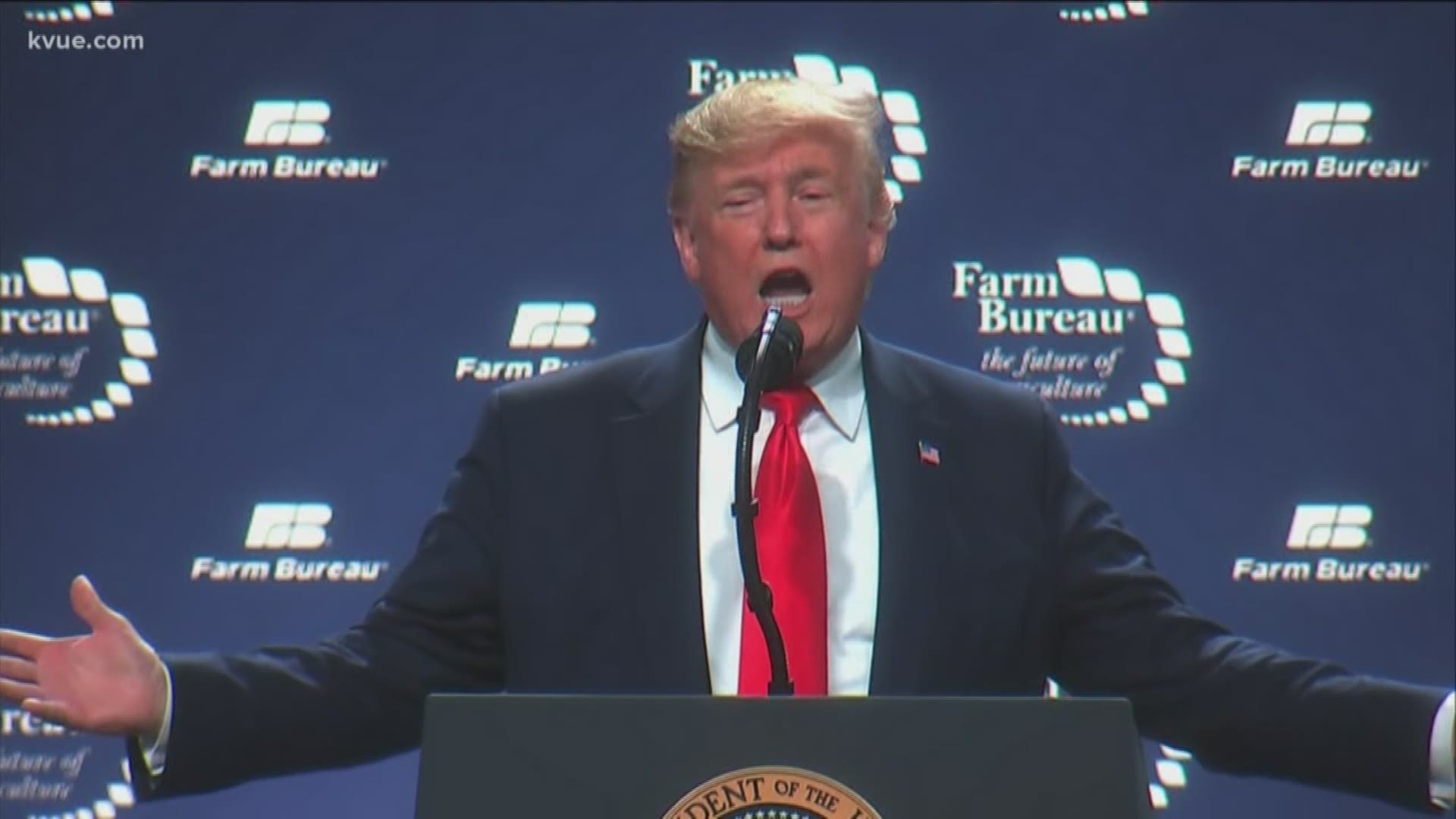 "We are winning for our farmers and we are winning like never before," President Trump told a roaring audience. "Farmers love America, and I just want to tell you that America loves our farmers."

Air Force One landed at Austin Bergstrom-International Airport after 4:20 p.m. on Sunday. The president's motorcade traveled to the Austin Convention Center, where the president spent about 45 minutes delivering remarks to convention attendees.

The president spent a lot of his speech celebrating the United States-Mexico-Canada Agreement, which passed in the Senate on Thursday. It succeeds the North American Free Trade Agreement, also known as NAFTA.

"The USMCA, as we call it, will massively boost exports for farmers, ranchers, growers and agricultural producers from north to south and from sea to shining sea," the president said. "We must ensure that America's farms flourish and prosper and that's what we're doing – you feed our people, you fuel our nation, you sustain our land, you uphold our values and you preserve or cherished American way of life."

The USMCA still has to be signed by the president. It is expected to increase market access for American dairy producers, while also helping with auto manufacturing and updating the rules for digital and trade copyright.

"I hope you all remember that, before I took office, American agriculture was being crushed by an onslaught of massive taxes, crippling regulations, burdensome federal band-aids – you know about that," President Trump said.

The president also celebrated the U.S. relationship with China, after he also signed a partial trade agreement with the country earlier this week.

"The deal with China will tear down market barriers and pry open vast new markets for American beef, pork, poultry, seafood, soybeans, rice, dairy, infant formula, animal feed, biotechnology and much, much more," Trump said. "We now perhaps have the best relationship that we've had with China in many, many years and China respects us now."

The president's speech also hit on the border wall and impeachment, although he mostly stayed on topic of addressing farmers and the new trade deals.

The president's motorcade traveled through Austin on Highway 71 and Interstate 35 to and from the convention center.

Air Force One left the airport around 6:50 p.m. Sunday. The president arrived back in Washington, D.C., around 9:15 p.m.

Before arriving in Austin, on Sunday morning, President Trump tweeted that he always loves being in Texas and that he will be speaking to "our great farmers" who "hit 'paydirt' with our incredible new trade deals: China, Japan, Mexico, Canada, South Korea and many others."

This is the third year in a row that President Trump has spoken at the AFBF Convention. It is also the second time in less than three months that he has stopped in Austin. In November, he visited to tour the Apple manufacturing facilities.

The AFBF Convention started on Friday and will run through Wednesday.

When the Queen of England came to Austin