Lt. Gov. Dan Patrick made the legislation a priority item after Dallas Mavericks owner Mark Cuban stopped the playing of the "Star-Spangled Banner" before games. 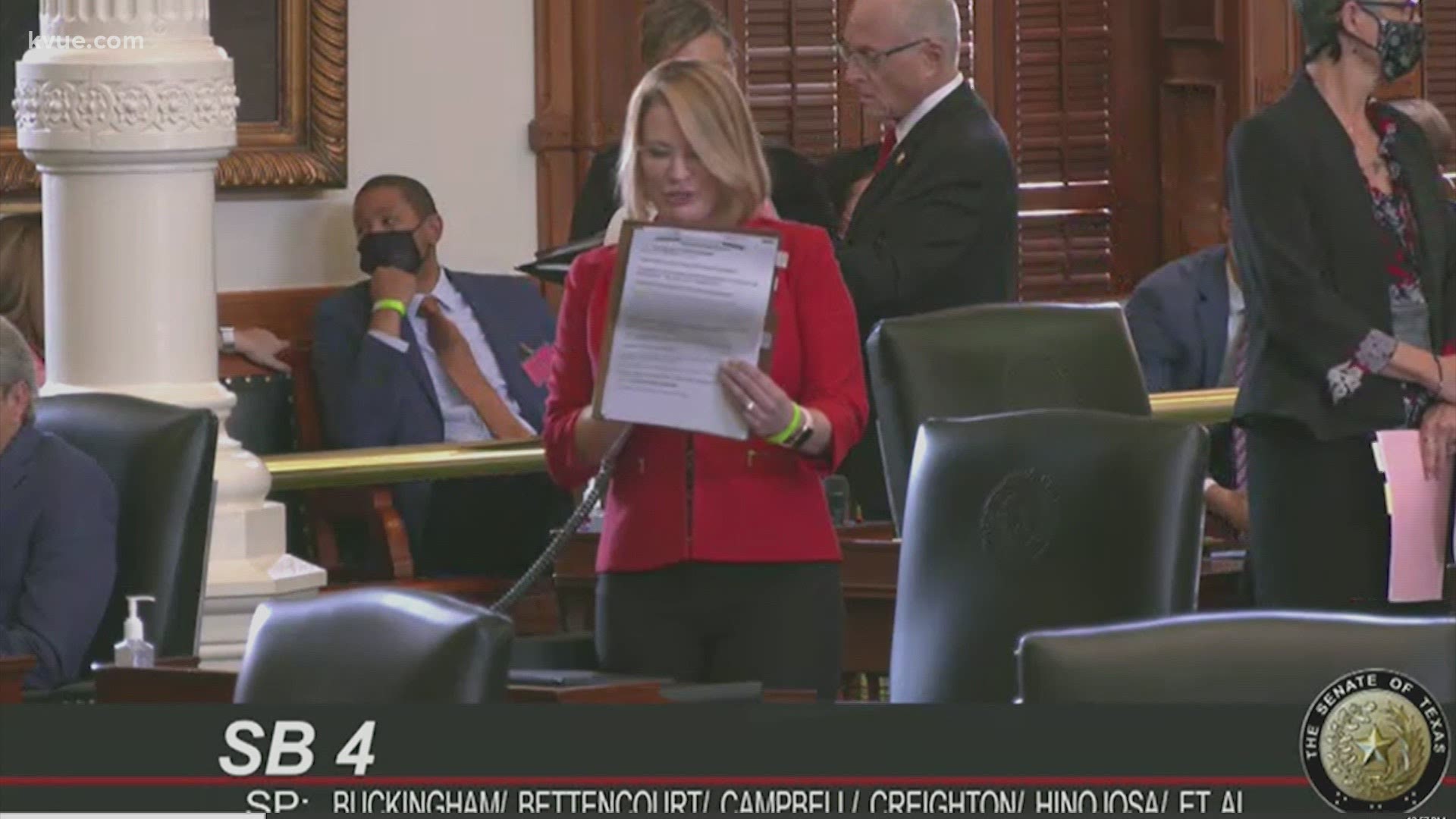 AUSTIN, Texas — Texas lawmakers took up several priority items in both chambers on Thursday, including a Senate bill requiring professional sports teams to play the national anthem at games.

State Senator Dawn Buckingham (R-Lakeway) authored Senate Bill 4 (SB4). Under the "Star-Spangled Banner Protection Act," the state, cities, counties and other governmental entities can't sign agreements to use taxpayer dollars with professional sports teams unless the contracts include a written agreement that the U.S. national anthem will be played at the beginning of each game. These types of deals are generally used to let teams play at stadiums that get government funding.

The NBA requires the anthem to be played before games and made the Mavericks organization resume playing it, but lawmakers say they want more protections.

"The least we can do for our brave men and women who've died fighting for our country and for those who are actively defending our freedom is to have our national anthem played before professional sporting events, of which it would not be possible without them," said Sen. Buckingham as she laid out the bill.

SB4 passed on all three readings and now heads to the Texas House of Representatives for consideration.

The Senate also passed Senate Bill 6 on all three readings. It protects first responders, businesses and doctors from frivolous lawsuits during a pandemic if they were following recommended safety protocols.

The members initially passed Senate Bill 1112, which makes it a Class A misdemeanor for election clerks to accept early mail-in ballots without verifying the signature on the ballot.

Senators also initially passed SB 1114 on a party-line vote. It requires voter registrars to proactively cross-reference voter rolls with Department of Motor Vehicle citizenship records and remove ineligible voters from the rolls. During the floor debate on the bill, Senate Bill 1235 was added onto SB 1114 as an amendment. It requires the secretary of state to compare voter rolls with DPS citizenship data monthly. Both SB 1112 and SB 1114 need one additional vote before they are sent to the House.

Meanwhile, in the Texas House of Representatives, members passed House Bill 5, which aims to expand high-speed internet service to parts of rural Texas.

Members also passed House Bill 1239, which prohibits any public official from making an emergency order to close a church or place of worship, as was done by some local leaders during the COVID-19 pandemic.

And the House Committee on Elections voted out a controversial election reform bill. After 17 hours of testimony last Friday, House Bill 6 (HB 6) was left pending in committee. During the middle of its meeting on Thursday morning, the committee members voted along party lines to advance the bill.

HB 6 does numerous things to change the voting process, including banning county leaders from proactively sending out mail-in voter applications to registered voters, as was done in Harris County in response to the COVID-19 pandemic. It also requires people who assist disabled voters to identify why the person needs help and gives more latitude to poll watchers.

Republicans have made voter reform bills a priority this session, saying it will help improve voter integrity and increase voter confidence. But opponents say the bill goes too far because it creates a criminal offense, and they argue the actual intent is to suppress voters.

HB 6 now goes to the House Committee on Calendars, which will decide if and when it will be heard on the House floor.

Father of former NFL player says son killed 5 others, then himself